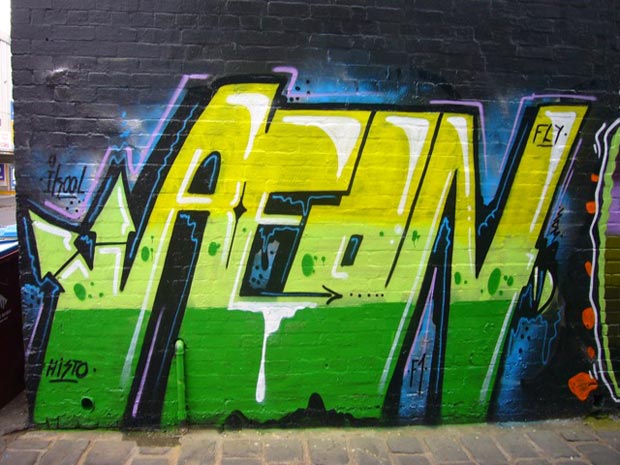 When I was a younger asshole, I used to spend a lot of my online lurking on graffiti.org—poetically dubbed, “Art Crimes, the Writing on the Wall”. This was before everyone in the fucking world had photobucket and flickr pages and I remembered being floored by all the quality art posted from all corners of the globe. One of my personal heroes was this guy from Australia who wrote AEON—a name that I was drawn to in this Freudian way because Final Fantasy X had just come out and I was playing it too much. In the game, “Aeons “were these wild, bright, crazy-looking Japanese monster/spirit things you could summon to fight bosses and shit  and for the sake of this article, suppose that in some convoluted way, the AEON I saw on the wall embodied the same in spirit. All of these pieces unique. They were actually memorable and stayed with me in my sketches. Crazy looking letters, bright-ass colors, brilliant color schemes—and perhaps the most important thing in all graffiti: good arrow usage.

I must have stared at this picture for hours trying to figure out the A.  (And that was before I  noticed the E): 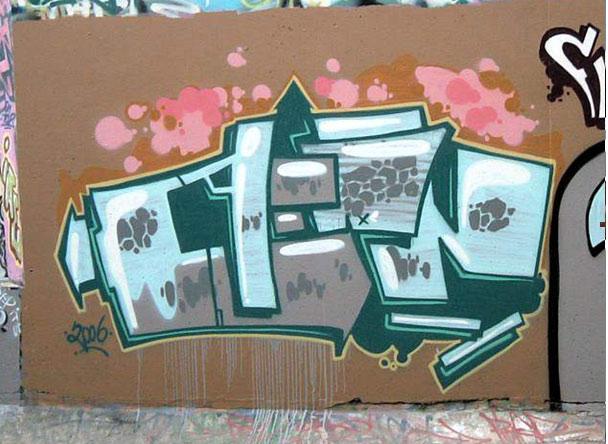 I hadn’t thought of this guy in years. So, when Fred asked me who I wanted to interview next—I had no idea. So I started siphoning through my saved picture files for an idea and found all of these old AEON flicks I saved probably with the intention of biting something from them for a later date. And that was that.  The following is my interview with a childhood hero.
Bombing Science:  where in the world were you when graffiti first touched you? (earliest memory, experience, etc—not in a weird, creepy molestation way)
AEON: I got into it as a kid by catching the train to my Dad’s house on the weekends. He lived right near the end of the Belgrave line. In the late 80’s and early 90’s it was one of the best train lines in Melbourne to check out graffiti. As a kid there is nothing else to do on a long train trip but look out the window. I remember the insides and the outsides of the train being covered in graffiti. My Dad would always fall asleep while doing a crossword and draw all over his shirt and my brother and I would sit there and point out our favorite pieces.
It wasn’t till I was in high school that I started piecing. All my mates were doing it and they were heaps better than I was. Over time most of them have stopped but I kept with it.
BS: What was the scene like growing up in Melbourne–in your observations, how did graffiti make its way from NYC to the Down Under? Was it the second Crocodile Dundee movie and bad, bad Leroy Brown? Was it hip hop culture?
AEON: The first writers I heard of doing Graffiti in Australia was GS38 and Dskyze. I don’t know the ins and outs of it but there is a book that has just come out called Kings Way. It’s all about the birth of Australian graffiti.
I know that people were painting trains and piecing the train lines before they ever saw Style Wars or read Subway Art or Spraycan Art. It all kicked off over here in 1983. Melbourne is a very creative city and art is accepted a lot more than other Australian cities I’ve visited.
There is a big hip hop scene over here. I’m not really involved in it. I don’t think we have the right accent to be stepping up to the mic.

BS:  When did you start writing and how did you come to the moniker Aeon? I always liked to think it was a Final Fantasy X reference but perhaps you aren’t as lame as I am.
AEON: I played around with it for years as a kid. I used to practice on my school books and steal markers from the news agency and do tags inside trains and around the place. But it wasn’t till about 1996 that I started to take it seriously and go out and do pieces on the train lines and paint trains.
I used to write other tags but I got in a bit of trouble with the law and instead of stopping I changed my tag. I was playing around with different tags for a while but none of them really clicked for me.
One day I was sketching in front of the TV while watching Aeon Flux and I did an Aeon sketch that I really liked and it started from there. It’s not the only thing I write. I have 7 tags. It’s just the one I’m mostly known for.
And I don’t know anything about Final Fantasy.
BS: One thing I’ve always liked about your style was the uniqueness of the lettering. It could be that I’m not so well-versed in the works of Australian graf writers but would you say your lettering is a particular focus for originality you when you write? Or is it a style typically found in that part of the world that you have just furthered and perfected?
AEON: I like to switch it up as much as possible. I don’t want to be known as one of those writers that just paints the same sketch but in different colors. My style is a mixture of what I learnt when I first started from looking at Melbourne and New York graffiti. Then I moved to London for a few years and traveled a lot and was exposed to a lot of different styles by painting with lots of different people. I also sketch a lot. Sketching is one of the main keys to developing good style. 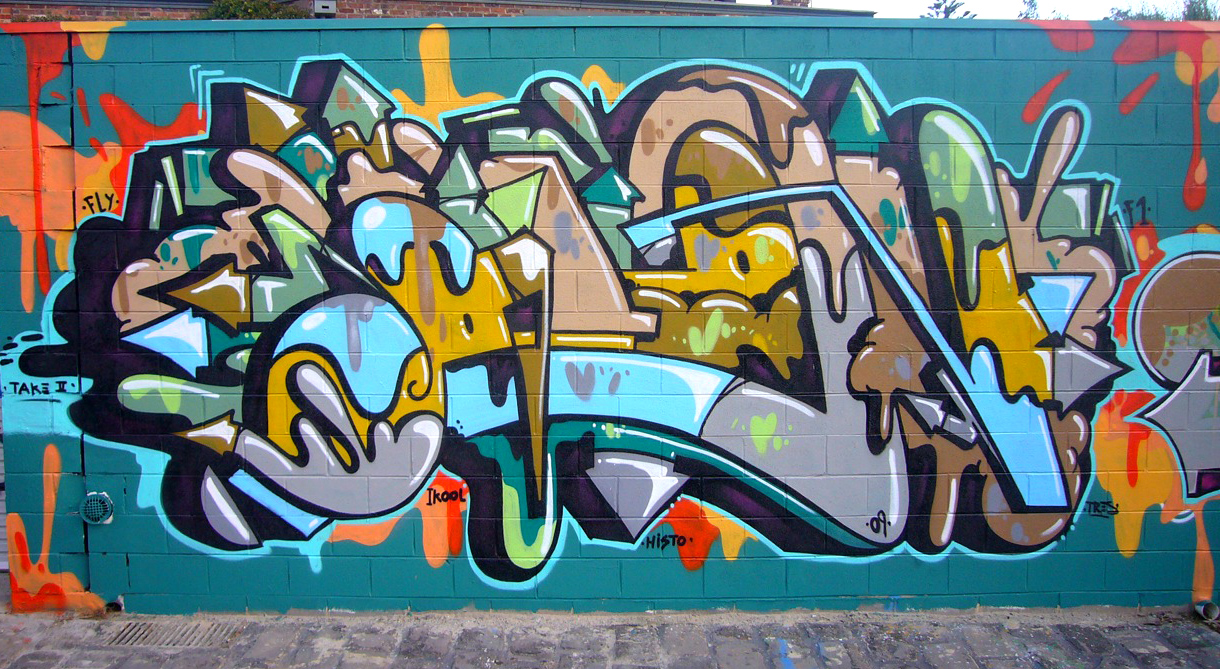 BS:  Where in the world have you painted? Do you have a favorite spot (why is it your favorite spot)?
AEON: I’ve painted in London, A few different parts of Australia, Sweden, Japan, NYC, San Francisco, Amsterdam Spain and other various parts of Europe. My favorite would have to be New York. I went there on my own in 2003. I painted every day and got up to a lot of mischief. I also met a lot of good people and had a great time.
BS: You mentioned in an earlier email that you actually lived in London, what is the subculture like in Europe as opposed to Australia–what "subgenres" so to speak can each region claim and how have they evolved from each other and come together over time?
AEON: I can’t speak for Europe and the rest of Australia because I have only holidayed there. But graffiti in London is a lot different to the graffiti in Melbourne. In London there are a lot of dedicated hardcore writers. But there are also a lot of writers who only paint legal walls. I found it to be really hard work to stay up over there. You paint a wall and it’s gone over the next day and I was always getting chased trying to paint the train lines. There is so much chrome and black. I was trying to do the Australian thing by rolling myself a spot on the line and doing a full color piece.
In Melbourne graffiti is much easier. There you can get away with a lot more but you have to find your own spots. The only way to paint a legal wall is to knock on someone’s door and ask them if you can paint their wall. If you get it it’s your wall you can redo it whenever you want. The train lines are the main thing to paint. It’s all about burning each other and getting the best spot. A lot of people paint the trains too. 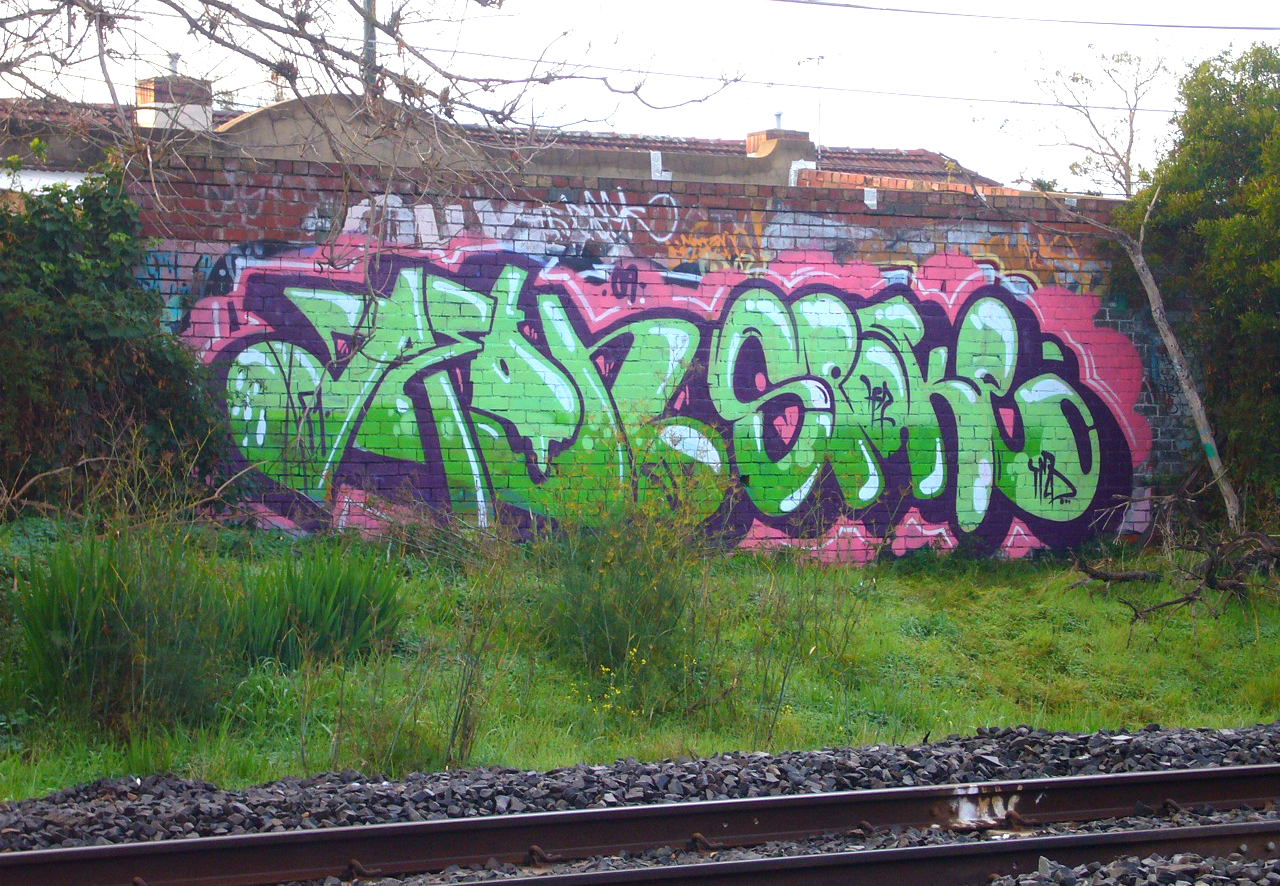 BS: So who do you usually paint with?  Or do you prefer to go-it alone?
AEON: I paint with my mates. The Flies crew, SDM and F1 crew.  We are pretty tight. I also paint with a lot of other people but the main ones are Tres, Take 2, Histo, Ikool, Fackt, Pluto, Psybr, Sirum, Vans, Zode and Sarg.
BS:  What wisdom comes from painting in a group? Any ancient can-control meditations passed down by a Myagi-like veteran? Or a new fill inspired when young blackbooks collide? Shit, if there’s any individuals you’d like to thank personally even, while you have the chance….
AEON: I’m not the best person to be asking about can control. I’ve never really cared about it too much. The main things I care about are:
1. Style
2. Colors.
If you get these two right you can paint as sloppy as you want, it will still look fresh. The main paint I use is called Australian Export. It is like an 80’s style can with a chisel tip. It’s a bit hard to control but you can get some great effects with it.
I have to thank the guys that got me started, Tusk2, Sarg, Zode and Duet.
And the ones that keep me motivated today are Tres, Take2, Histo and Ikool. 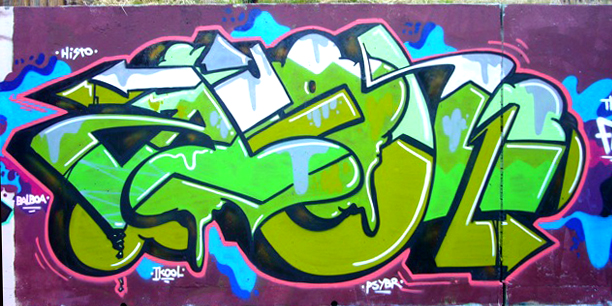 BS:  Do you do any commissions or "legal street art" in any way?
AEON: I paint whatever. I like painting legal walls with a Beer in one hand, can of paint in the other.  I prefer painting quicker stuff on illegal spots.  And I’ve been known to paint a bit of stuff for galleries too.  I just like to paint.
BS: In your opinion, why do you think law enforcement has such a hard-on for catching writers?  Speaking for the USofA, I feel like 95% of graffiti-persecution all boils down to a property over people mentality instilled into our system through years of capitalist conditioning…is it the same way in Australia? or England?
AEON: I think that because it’s a visual crime people are more likely to complain to the cops. A lot of crime happens and no one sees a thing. The only person that knows is the victim. With graff it’s all about being seen so people go out of their way to get it in the most prominent spot possible. I think the police problem is a universal thing. I’ve managed to talk my way out of some hairy situations.  But most cops don’t like graffiti writers.
BS: You have any good stories from run-ins with the One-Time?
AEON: There are a lot but I’d prefer not to go into them. All I’ll say is that cops have pulled a gun on me twice, I almost got run over hiding in long grass, I’ve been beaten up a few times and I have been chased a lot. But I have also spat on them from a bridge which was funny and last year I went crazy at some young rookie because he told me I couldn’t finish my piece (that I was doing illegally). He backed down and walked away and I left before backup arrived.

BS: What’s next for aeon?
AEON: Who knows? I want to just keep painting and traveling. I’m working on a lot of fine art but I still paint about 2 pieces a week. It’s the good life in Melbourne. I’m happy to just be hanging out with my girlfriend and friends and painting whenever I get the chance.
BS: If you were so inclined, and if the rules of time and space didn’t apply: what historical building would you bomb the shit outta?
AEON: It may sound pretty crap coming from a graff writer but I’m not that into destroying historical shit. I paint on government stuff all the time and I do a lot of illegal graffiti but I try to do it in a way where I’m not pissing anyone off except council workers. If I paint someone’s private property it usually has tags and throw-ups on it before I was there. But a burner would look good on the front of a police station.
http://mraeon.blogspot.com/
http://www.flickr.com/photos/aeonsdm/ 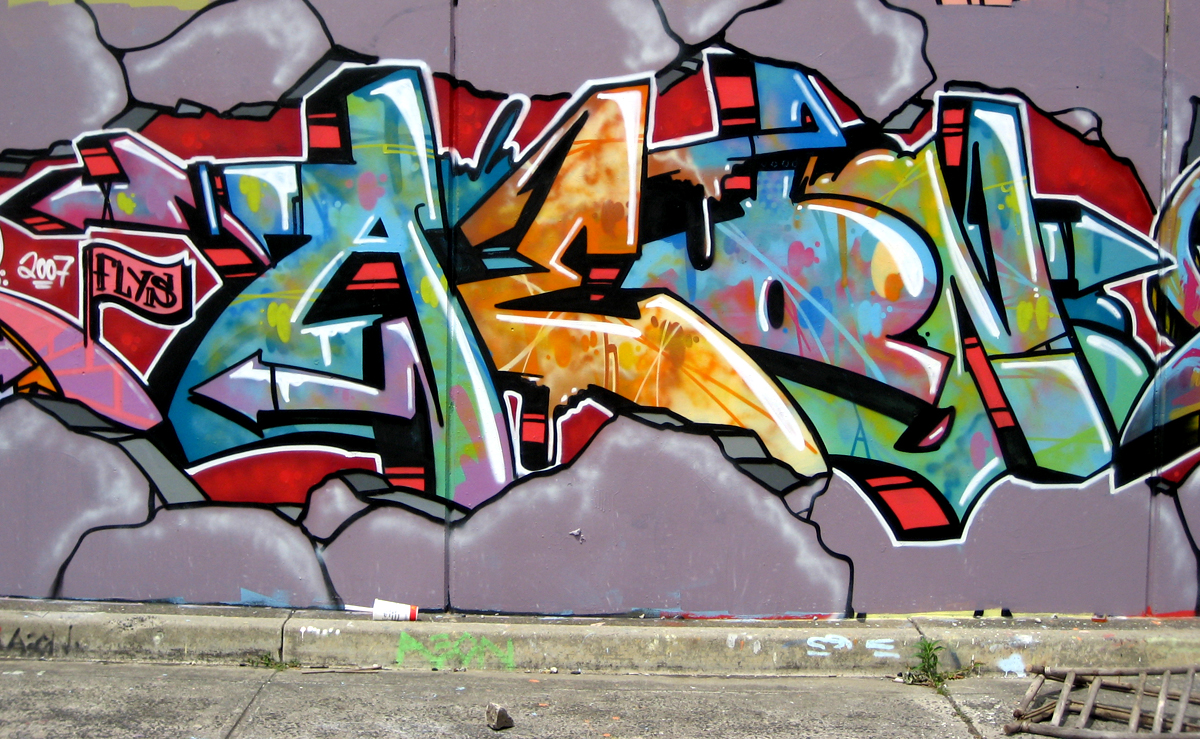 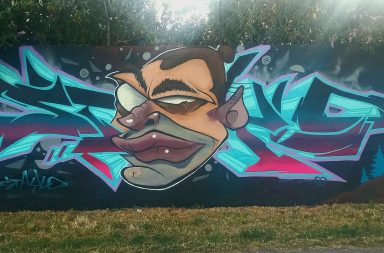 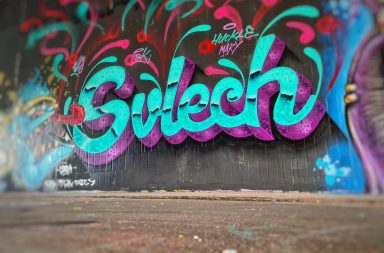 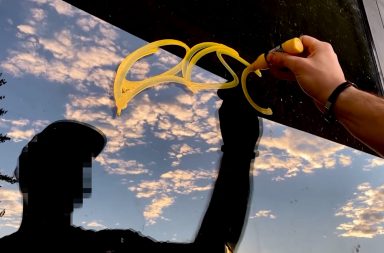