BSCI: Who is Eyeone? Where are you from? What is the significance –if any- to your moniker?

EyeOne: I was born in Mexico City. I moved to the U.S. with my family when I was 6, and I've been based in Los Angeles ever since.

As for my alias, EyeOne: When I was really little, I accidentally poked one of my eyes with a long metal rod from a model boat. I had to wear an eye patch for a long time, and it was possible I could lose sight in that eye. Fortunately, my eye healed but the experience had a big impact on me.

BSCI: I imagine that situation was very traumatic for you and your family. What impact did the eye injury have on you -as an artist and an individual? Does the memory of it affect the way you approach life? Are you now a more cautious person or more daring?

EyeOne: Specifically, I recall thinking I was not going to ever see again out of that eye. The first immediate impact on me was that of sadness. I think my family was more hopeful that the doctors could do something about it. And naturally I was way stoked when the bandage came off and I could see. I did have to do a bunch of eye exercises for years afterward, but as of now, my vision is fine.

As far as an impact to my approach to life, I really can't quantify one. I know that I am super paranoid of anything close to my eyes. I think I am cautious in general, but not sure I can attribute it to the eye accident. I still pull some really dumb things from time to time, ha! As far as being daring, I enjoy climbing structures and ladders and things.  I don’t do for graffiti itself but rather for the fun of it- plain and simple. It is probably all somehow connected, but I can't really explain how. 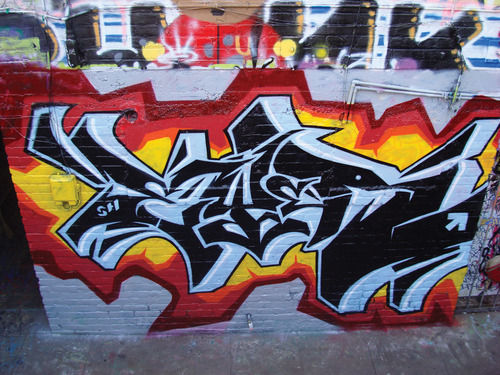 BSCI: How were you introduced to the culture and what was it about graffiti that caught your attention?

EyeOne: I first consciously wanted to paint graffiti after my parents took me to see the film "Beat Street." I was always drawn to art and watching the pieces go up in the movie made it seem really fun. I think the large scale, the colors, and the fact it seemed mischievous stuck in my mind. After that, I started drawing silly pieces and bubble letters on paper.

What made me actually grab a can was a series of things. Seeing an unfinished production by Mandoe and Neo MAK and a silver by Krenz aka Yem AM7 in my area got me motivated. Linking up with two kids from my neighbourhood -Gloze OTR and Modem SH- that were also into graffiti pushed me to get a can from my Grandma's garage (I asked for permission!). We went down to the L.A. River and painted our first piece.

BSCI: I have noticed that a lot of your work features a Zapatista character; for the folks who are unfamiliar with the Zapatistas, explain the significance of this group and why their image holds such a significant role in your work?

EyeOne: The Zapatistas are a primarily indigenous movement that arose in Chiapas, Mexico, organized in the struggle for basic human rights such as liberty, education, peace, health care, housing, equal rights, self determination, democracy, and justice. Since their public uprising in 1994, they have been a major influence and inspiration to social movements around the globe.

The Zapatista characters I paint were actually designed for their Other Campaign / La Otra Campaña outreach project that began in 2006 and spanned the globe as a grassroots effort to connect diverse organizations, peoples, and movements. The characters were designed to be used as icons for a myriad of related activities. They've ended up repurposed, remixed, and reproduced on everything from stencils to posters, protest signs to pencil holders (!)

At the suggestion of Cache, I began painting them on walls he had been painting around town, usually interacting with his trademark chickens.

I paint them as a way to show my solidarity with peoples' movements and their struggle to make the world a better place. 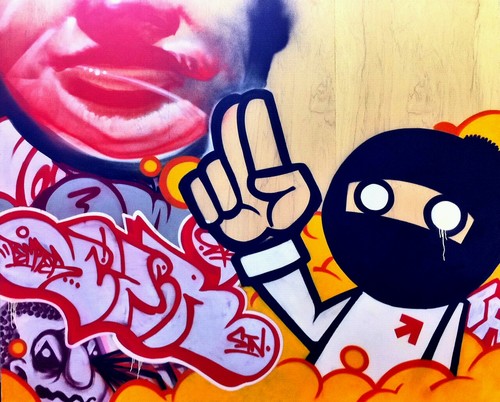 BSCI: Being that you're in America and the current political climate is not always the most welcoming to Latino people (i.e.: the ongoing debates over immigration), have you experienced any sort of backlash for using Zapatista characters? How has the public perceived the characters?

EyeOne: The funniest wrong idea people get about the Zapatistas is that they are ninjas. But in a deeper sense, even that isn't too far off the mark. One of the communities that forms a big part of the Zapatista movement is the Tzotzil. Their name means "bat people", with the implication that they can manoeuvre in the silence of night and see in the dark. Ninjas were defined by their stealth methods. The Zapatistas also existed as a covert, clandestine organization for many years. And ninjas in the popular imagination operate under the cover of night and darkness –  nocturnal like bats.

I have not experienced any backlash for painting these characters. The Zapatista movement has embraced them. And their message is ultimately one of peace, justice, love, freedom. Don't know many people opposed to those values. 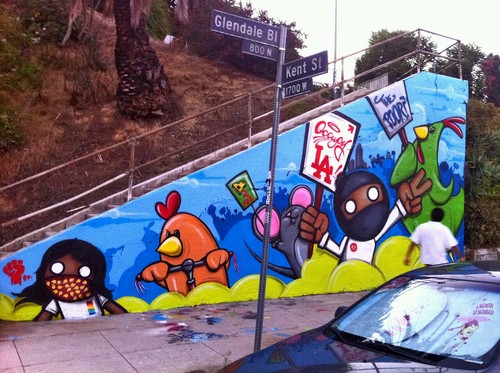 BSCI: One last question regarding graffiti and politics: In your opinion, should graffiti writers use their art for political means- to convey messages and ideas- or should they remain silent and allow the politicians to handle politics?

EyeOne: I think any attempt to pigeon-hole the role of graffiti writers would defeat the ultimate freedom graffiti represents. Some writers are happy glorifying criminality and material consumption; others profess love and hate; some make social statements; and still others just enjoy drawing letters and images. It's all good in my opinion, and it keeps graffiti as a pure free voice.

BSCI: Let’s talk about Los Angeles. It seems to be a “Mecca”, in regards to housing of many great [graffiti] writers. I ask this to every artist from Los Angeles, but I’m curious to know your thoughts; what is it about your city that keeps producing so many talented artists? Where does the creativity stem from?

EyeOne: I don't think L.A. necessarily produces more talented artists than any other particular place on the globe. I think what's at play is the accessibility of a wider range of media. Clichéd as it sounds; we are a big entertainment city, so attention is focused on what's coming out of here. Media tends to look at what's closest and most comfortable to cover because it is easy and convenient. It becomes an echo chamber and keeps repeating the same thing, in this case, the concept that L.A. is some unnatural hotbed of talent, until it becomes "truth." Never mind that plenty of artists the mainstream press considers "from Los Angeles" are not really from here, but it is necessary to classify them as L.A. artists to perpetuate that narrative.

That rant out of the way, L.A. has a ton of people from a myriad of backgrounds, so a morsel of truth might be found in the sheer size of our population. 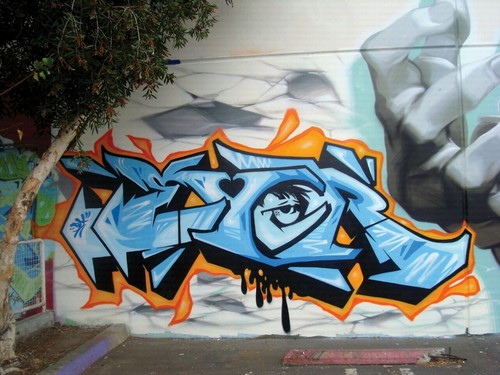 BSCI: Out of all your achievements, thus far, which one are you the most proud of and why?

EyeOne: I feel like I have much to achieve still, so I'm not really ready to feel proud.

BSCI: What plans do you have for the next year? Can we expect any shows or exhibits?

EyeOne: I'm working on a solo show that will take place in October at Hold Up Art in downtown L.A.

BSCI: I imagine a lot of work goes into any show, especially a solo show. I know a lot of artists who have talent but lack the drive to be successful. For you, where does the motivation- to write and paint- come from? What gives you the reason to go out and paint?

EyeOne: On a concrete level, the murals I paint Zapatistas on are 99% motivated and organized by Cache. Other graff, I usually wait until I get invited to paint. (I'm pretty lazy in that respect…)

In the studio I just automatically feel like I need to be producing. Some of my earliest memories from childhood are of feeling like I just needed to draw and make some sort of visual mess. I've received tons of encouragement and challenges from family and friends all my life. That's probably also part of what motivates me. So I guess it is part nature and part nurture. And it's lots of fun. 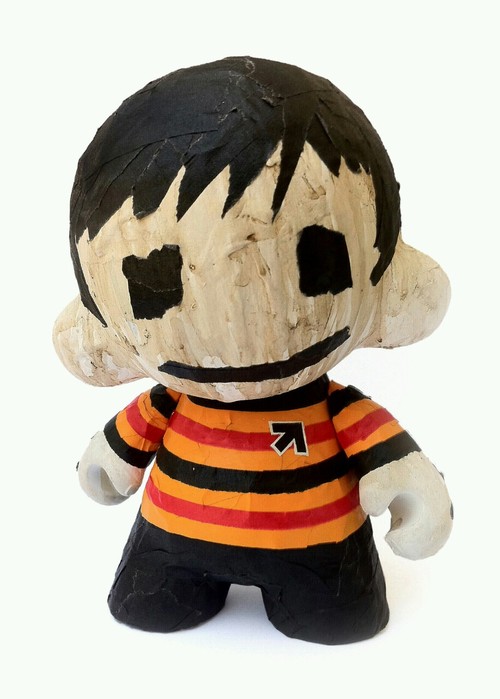 BSCI: What's the biggest misconception about you – as an artist and person?

EyeOne: I really don't know if there even are any conceptions about me. I'm just another brick in the wall.

One time, I did bump into some kids who said they thought Cache and I were recent arrivals to L.A. on some hipster street art tip. Ha!!!

BSCI: You mentioned not yet having an accomplishment you're not proud of, at this moment. So I want to know, what would be the thing(s) you want to accomplish most?

EyeOne: I’d really like to work on ending hunger and war and inequality in the world. I think pride can lead to conformity. I prefer enjoying what I do and learning from it every step of the way. I’m not sure how well that answers your question, but I feel those things would be most important. 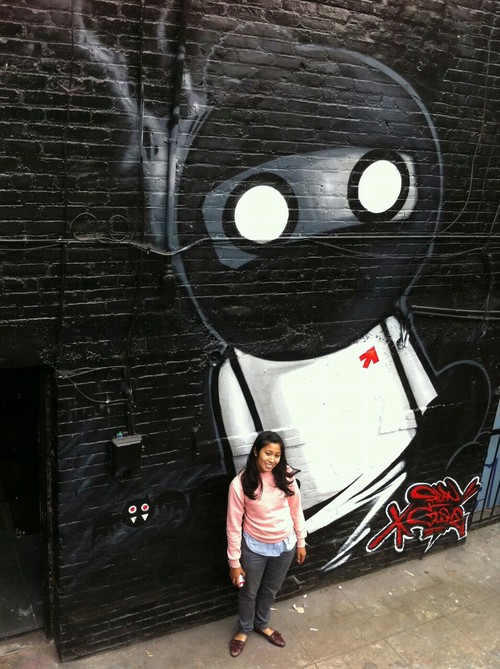 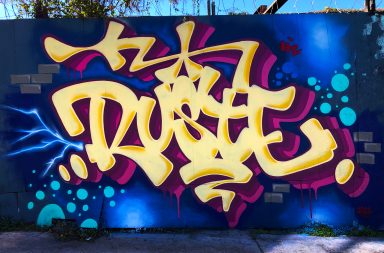 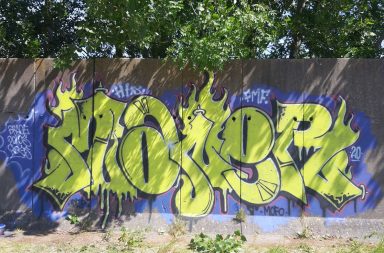 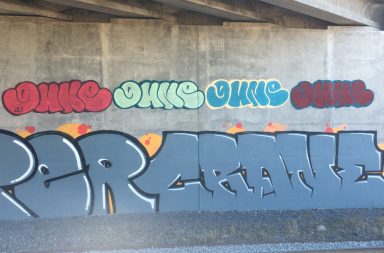