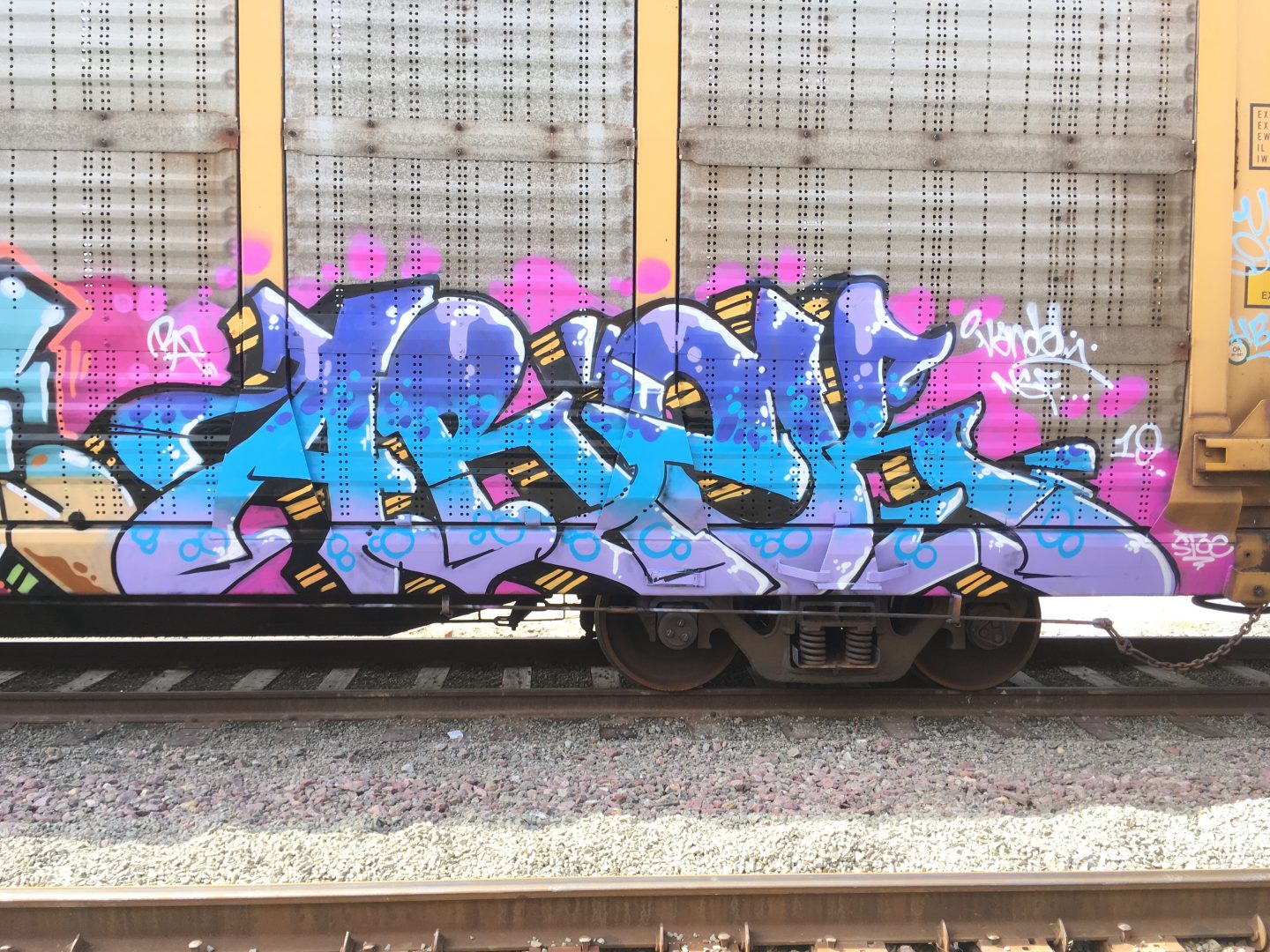 4
SHARES
ShareTweetSubscribe
[wysija_form id="2"]
Alright so thanks for taking the time out to do this interview, can you give us a brief introduction to who you are, what your history is in the graffiti game and what crew do you rep? What got you into graffiti?
Arek BA(burning America)
Nsf (non stop funk )
Fgs(freights get smashed)
PA (paradise art) Davers crew bmore style master
Kms(konstantly Maintaining Strong)
Started scribbling in 1986 -more as a act of vandalism-I met Jase BA at that time he was writing master along with so other random crew tags gsg(gang style graffiti) gsc (ghetto strikes crew) -I was writing zap2
Sharpie and magnum marker tags .
Bunch of random hoodlum shit i would tag along ..smash and grabs,stolen cars etc..
Painted until 1995 and took a hiatus until December of 2000.pretty much since that time I’ve done more and gone harder than my first run. 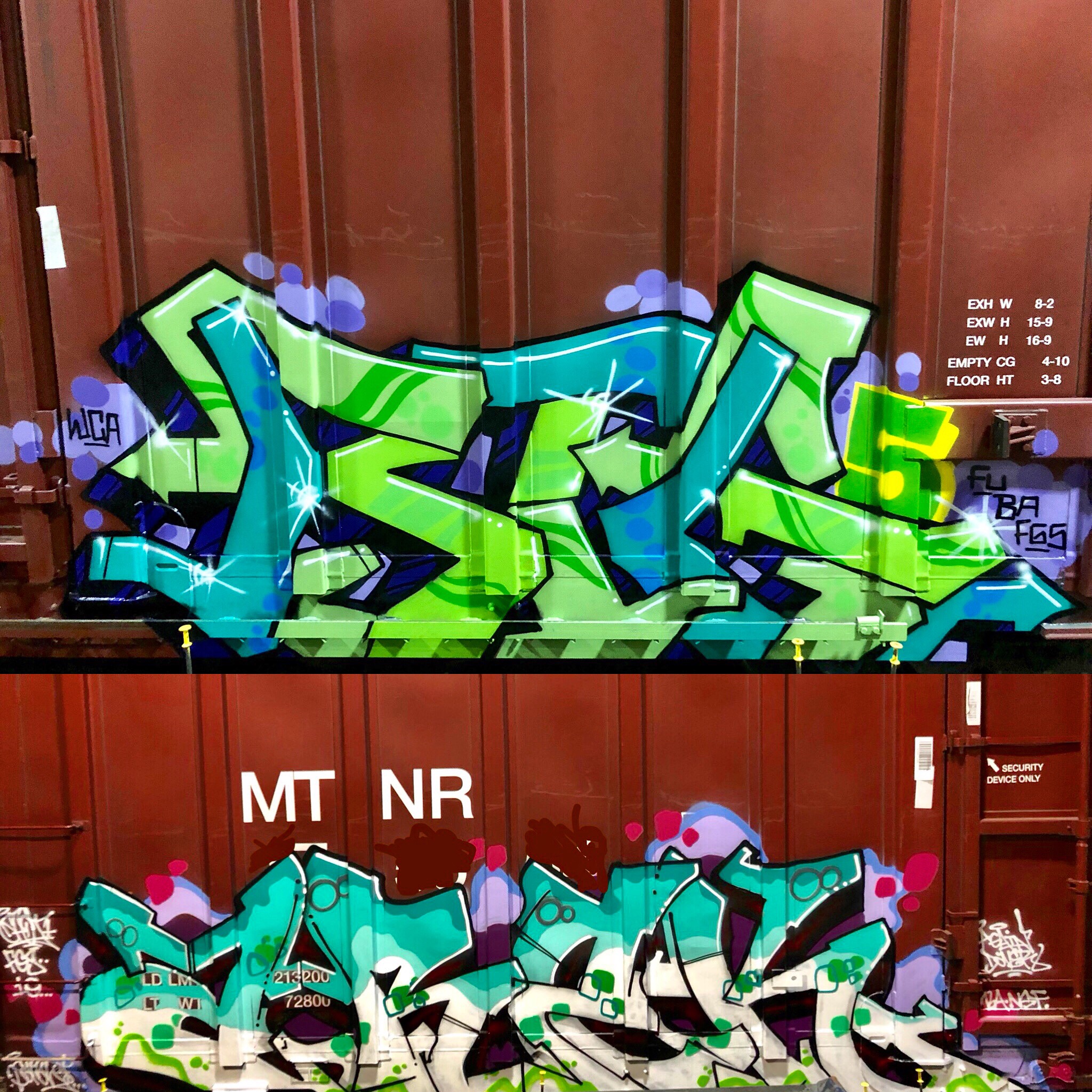 Do you make your fulltime living from graffiti or is this only an afterhours passion of painting with friends? How did you land your first gig doing mural work?
Graffiti is an outlet for me to enjoy. Over the years I’ve done corporate murals etc. One time Con and I landed a spot in the Smithsonian Portrait Gallery an exhibit called “Recognize” That was a awesome opportunity Roger gastman hooked Con and I up with a now defunct mural company called critical massive -this was in the early 2000’s.

When you go out to put a tag up what do you prefer: train or building and why? Do you have any crazy train yard or travel stories to share?
Trains are fun.. but I’ll take a tag on anything.
My old friend Matt Geeks (R.I.P.) called it the “Great Tropicana chase”
Geeks,Reup, a local friend Amer and I knew that a derailment had happened north of Baltimore and the yard down the street from an old spot i had lived at was stacked with trains on the derailment.
This was daytime btw. We got on the yard,5-6 lines filled this spot to the top. We hopped over a few lines saw a worker and continued to all spread out and run away .. I had hopped over a line again and came down to a Csx Bull (rr police) he told me to get on the ground and asked for my bag…(it was a Sunday and i had work in the am) I wasn’t getting locked up that day. As he looked in my bag .. i seized the opportunity to run.. he yelled stop and started to throw rocks at me .. i hopped over the line and a worker yelled “come back here “ that wasn’t happening.. I made it back to the house and one by one everyone showed up ..

after the fact some other kids told me aviyt getting hemmed up in the same yard the same day.. they told me they had been painting under a train bridge and was spotted .. got caught .. one of them was just hanging out watching .. they all got tickets for trespassing as this was happening the bull that I had got away from walked  up (with my bag) and said to the guy that said he had been watching and said “thought you just was watching”-“i have your bag” the guys present knew it was mine (an old girlfriend had written her name on it ) and it was stacked with Montana. That i was selling at the time . This is what Geeks did in a photo album..referencing the chase story i told you

Below is a tag of his from what he named it.
Rip Geeks

How important is the blackbook to you on a daily basis? Is there any exercises you do that you found particularly helpful when you started out?
Originally an old friend Car DST from Baltimore (style master ) was a black book murderer .. always promoted the strength In. Lack books.. it wasn’t until like 14 years ago that I really started sketching .. Wane cod was over and said a sketch a day ..just ink it and keep moving .. I don’t sketch every day but I try to on a weekly basis.. and actually find it really helpful to do other peoples names .. or gets you out of the routine of Katy doing the same letters in the same order..

What kind of music do you listen to when you paint?
I grew up listening to everything from my father and Motown and music from his youth  to run dmc and everything from Motley Crue to Iron Maiden to The Cure. Now I listen to old school rap to various forms of older rock and metal. On Pandora I pretty much listen to anything.

I see you repost a lot of work from other people in the graffiti community which is awesome to see other artists promote each other but it go me thinking who is inspiring you the most these days? Do you pay attention to a lot of graffiti from overseas or are you more into the stateside artists?
As far as inspiration.. (I’m gonna leave someone out accidentally I’m sure)
From members of my crews tjatbstay pushing the limits to Wane cod (he’s a graffiti machine btw), to to people like Drax wd who travels the world writing on shit in places that none of us will ever travel to and beyond . Pure tfp,Spot kms,Daver PA crew,some of those MVP Guys from Europe as well,The OTR crew out west are smashing LA and beyond ..
Tons of gunners I see on the rails as well-Werst cult rem crews-pepe,kerse amfm,kick msk,Bandoe,..etc still love some Sigh,lyes and Aest2 dos crew 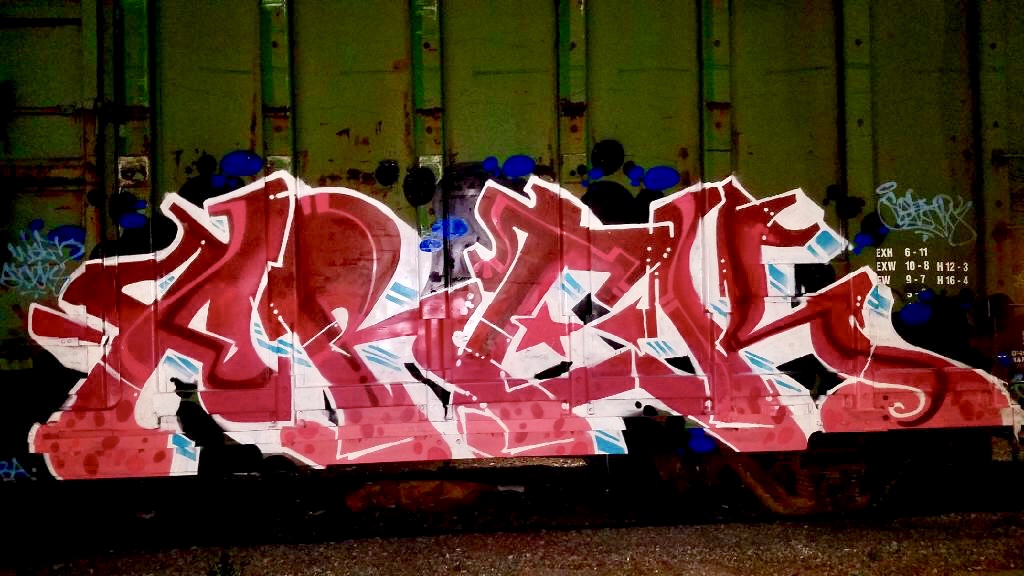 How important are festivals and art shows to what you do? Do you have any favorite art festivals that you attend regularly?
To each his own . Don’t move around that much .. to indulge with festivals,
But Steel Wheels is a must on regular to attend for real deal freight history lessons. 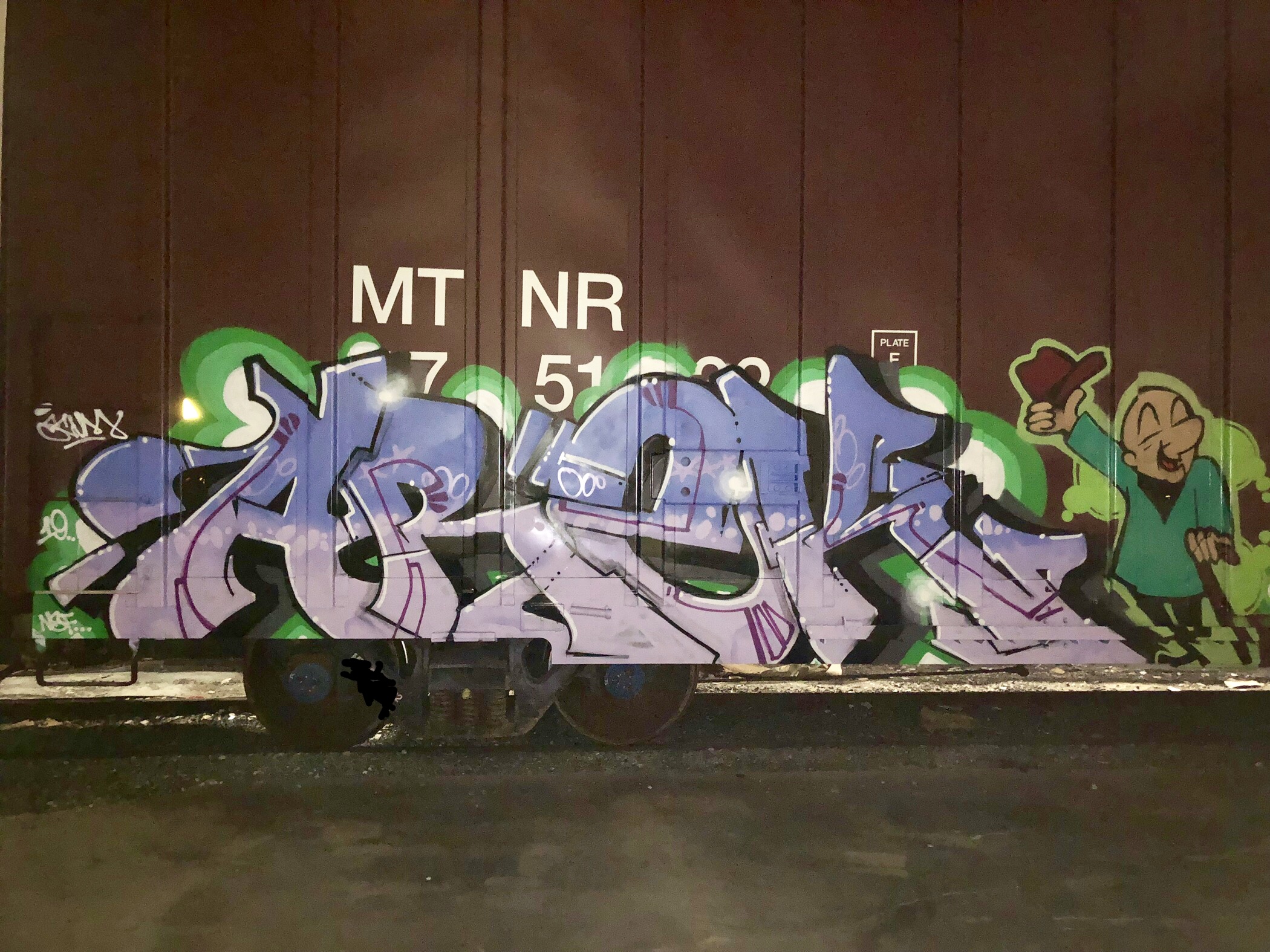 What do you think of graffiti in art galleries? Do you think its selling out or is it just another opportunity for artists to make money?
Do you? Plenty of multi talented peoples out and about.. get what you can get while you can get it ..as far as selling out
I guess it’s levels to it ..
To see some random that hasn’t paid dues or should i say put in work and act like they have taken part in the graffiti culture is lame .
What separates a successful artist in your mind from an unsuccessful one?
Beauty is in the eyes of the beholder …
One mans trash is another’s treasure as they say
It can’t hurt to know the right people first off.
I’m not 100% what the difference is though.

Any shoutouts you would like to give? Where can people follow you?
All my crews BA-Nsf-Pa-Fgs and Kms
Look out for a shit ton of Arek/Big 5 panels on the rails .. Spot fgs and Mitor for looking out for a brother and making me feel at home ..
Rest In Paint -The Kodak Kidd/Soe-Acne-Tre-Vandel-Geeks-Mfone
And thanks to graffiti for saving me from far worse shit