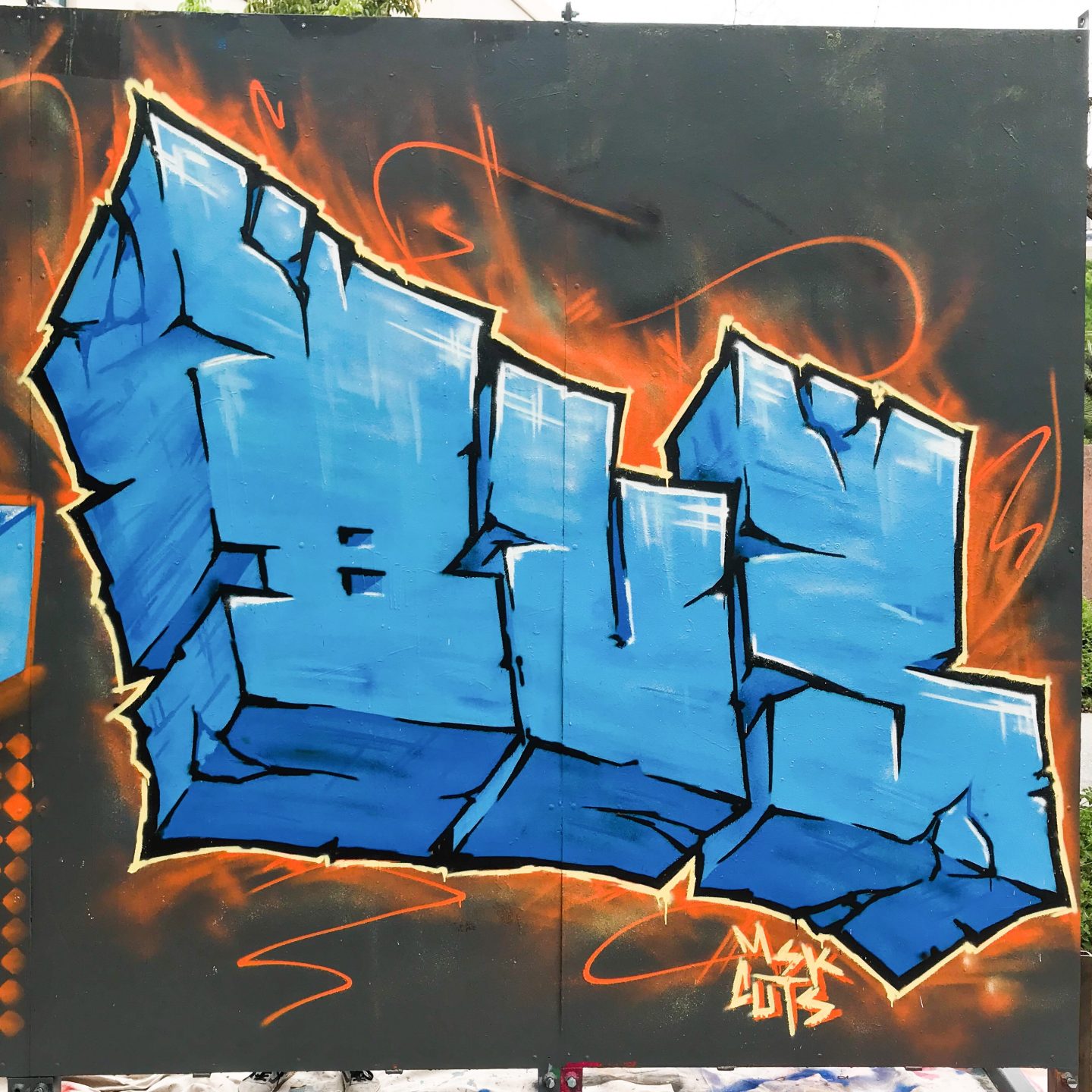 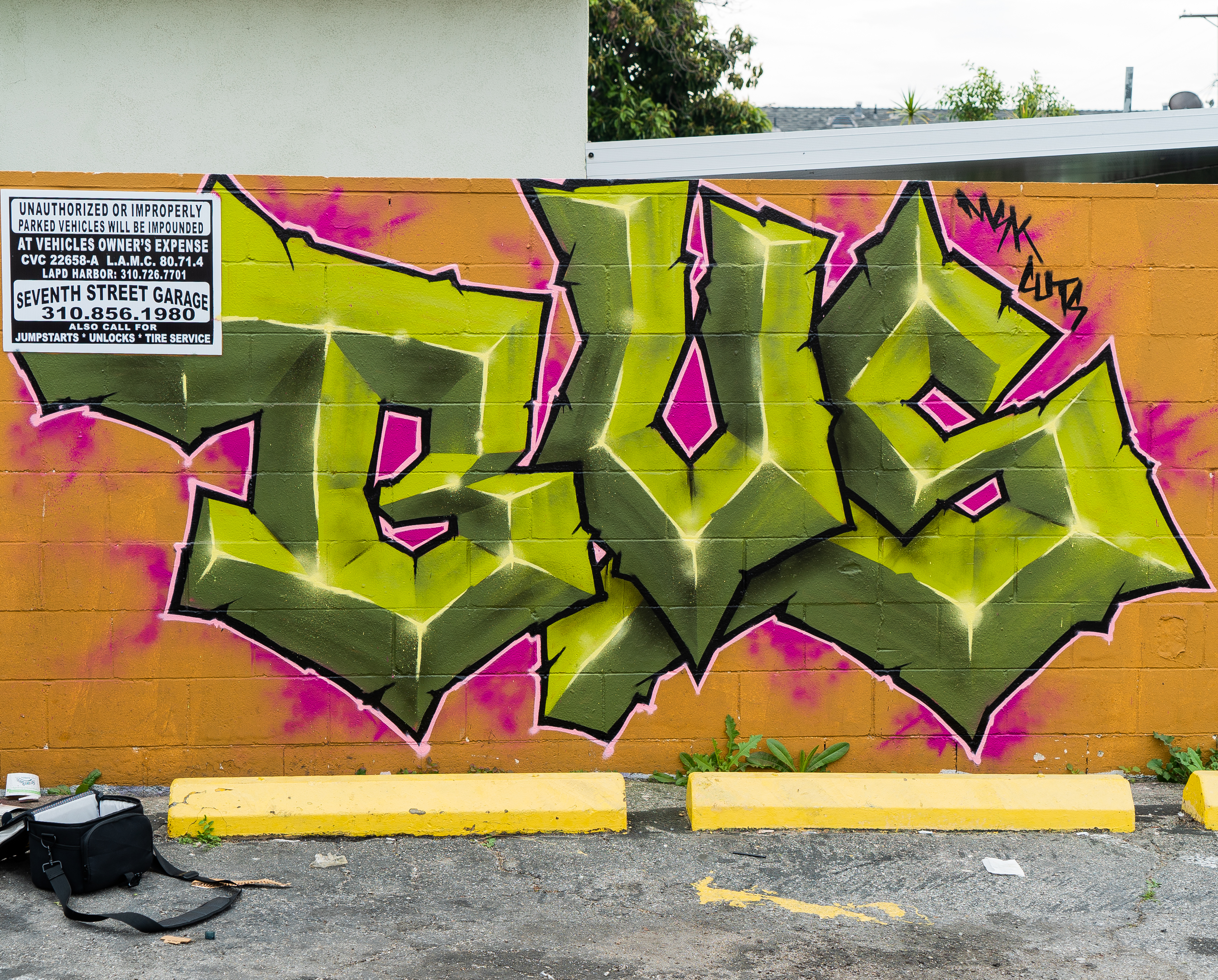 Alright so thanks for taking the time out to do this interview, can you give us a brief introduction to who you are, what your history is in the graffiti game and what crew do you rep? Where does the name bus come from?
Thanks letting me be a part of this. I’m Bus166 from MSK and CUTS crew. I started doing graffiti in 1991 with markers in bathrooms and things like that. Around 92, I started getting more serious with paint, bombing and trying to learn how to piece. In late 1992/early1993, I met some people from MSK as they were transitioning from AD to MSK and ended up doing a lot of painting with Gank/Gkae; a few months into that, he brought me to a meeting and had me put on MSK. It was pretty much a whirlwind of graffiti from then until around 2000 when I took a few years off. I started art school in 1998 to study graphic design and the workload ended up being a bit too much for just about any other activity. 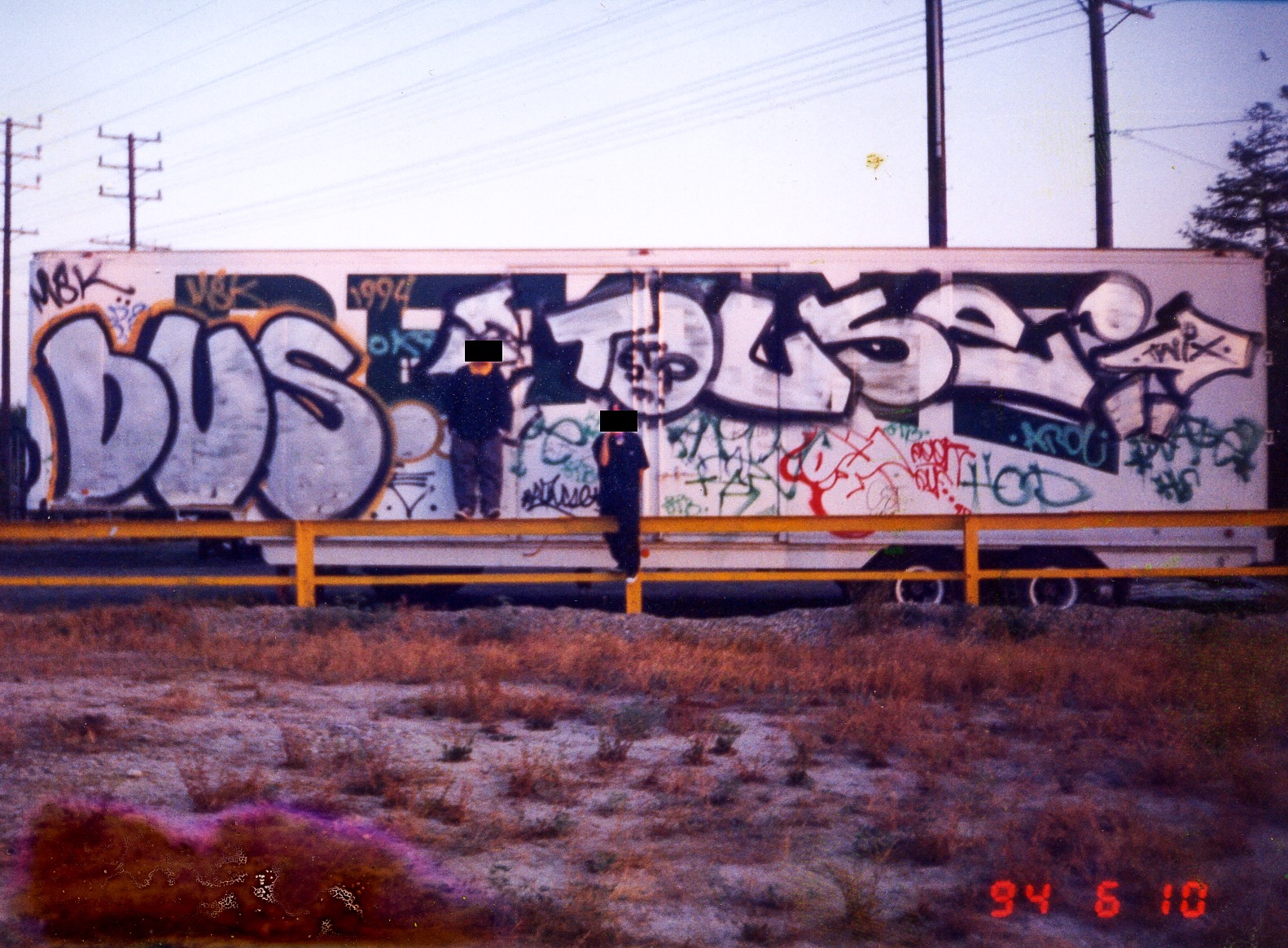 One of my favorite posts n your instagram is the live painting vid you did with Hex, Digital and Cab at the live beat swap meet is this the first time youve been apart of a festival like this? Can you tell us alittle bit about how did this collaboration came together?
I have a studio in San Pedro (@machinestudio on Instagram) where we do some art/graff related non profit work. One of the programs we have is a Mobile Graffiti Yard (@mobilegraffitiyard on Instagram). It’s a modular wall system made of steel and wood panels that we can bring to just about any location to create a Graff yard. For the Beat Swap Meet, they approached me about bringing the Mobile Graffiti Yard there and coordinating some artists for a live painting event. I greatly respect Hex, Cab and Digital and have worked with them in the past, so it was an easy choice to ask them to participate. We also just started carrying Loop Colors at Machine Studio, so I sent a proposal to them about sponsoring the paint and they accepted. I feel like it ended up going very well and everyone seemed happy with what we brought to the event. 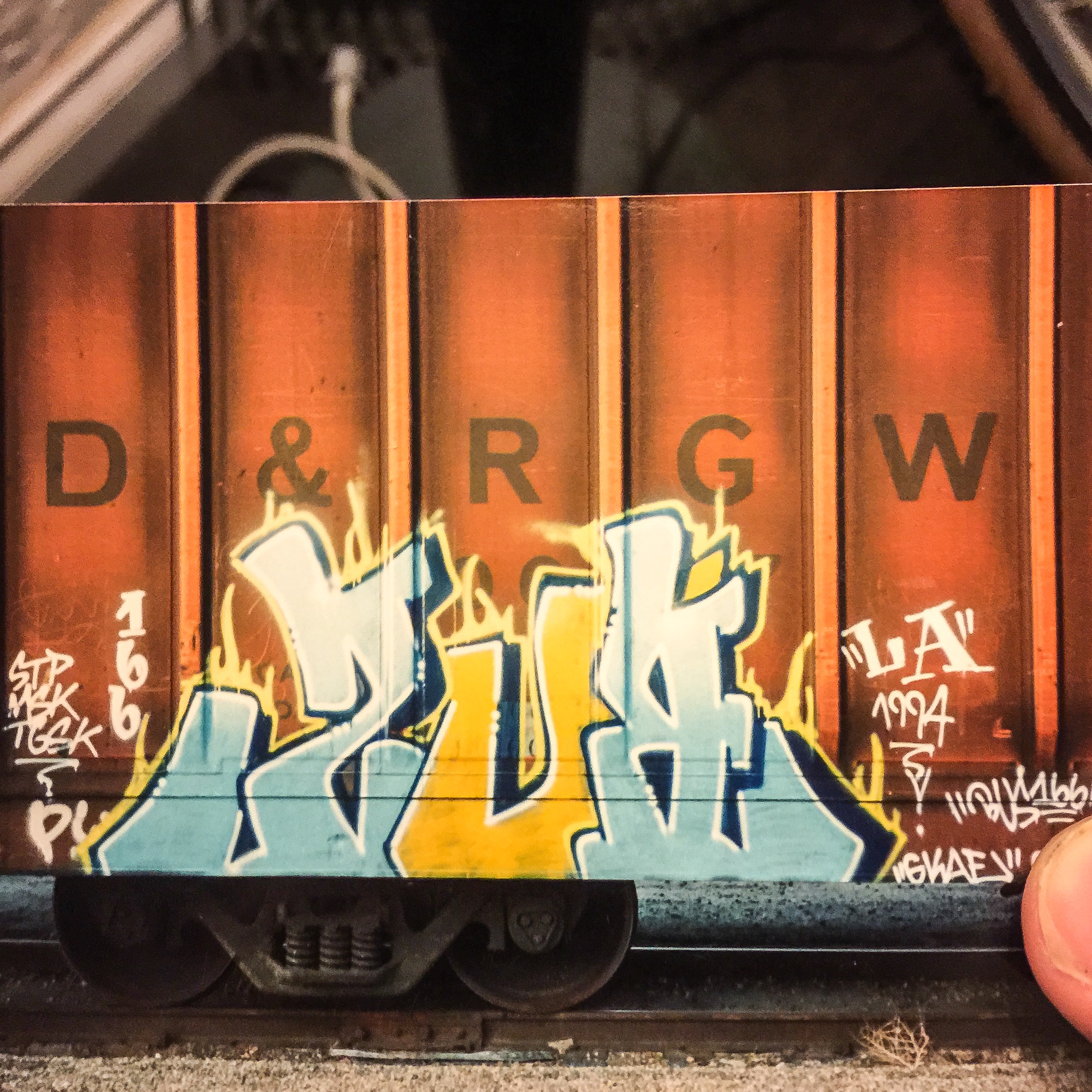 From looking over your profile it looks like you do a lot of graffiti festivals, how did you get involved in so many live painting events? Do you think these are a good way for local graffiti artists to put their work out there and get noticed?
My participation with the festival type of events was mainly due to the Mobile Graffiti Yard, but I’ve done some other events outside of that; I think the others just came from me trying to stay active in the culture, painting, hosting events, utilizing social media etc. It’s fun and a good way to keep me painting which is difficult at times with career/community things keeping me busy. It seems like a good way for artists to get their name out there, but nothing beats the traditional methods that graffiti writers have been using to get noticed for decades. 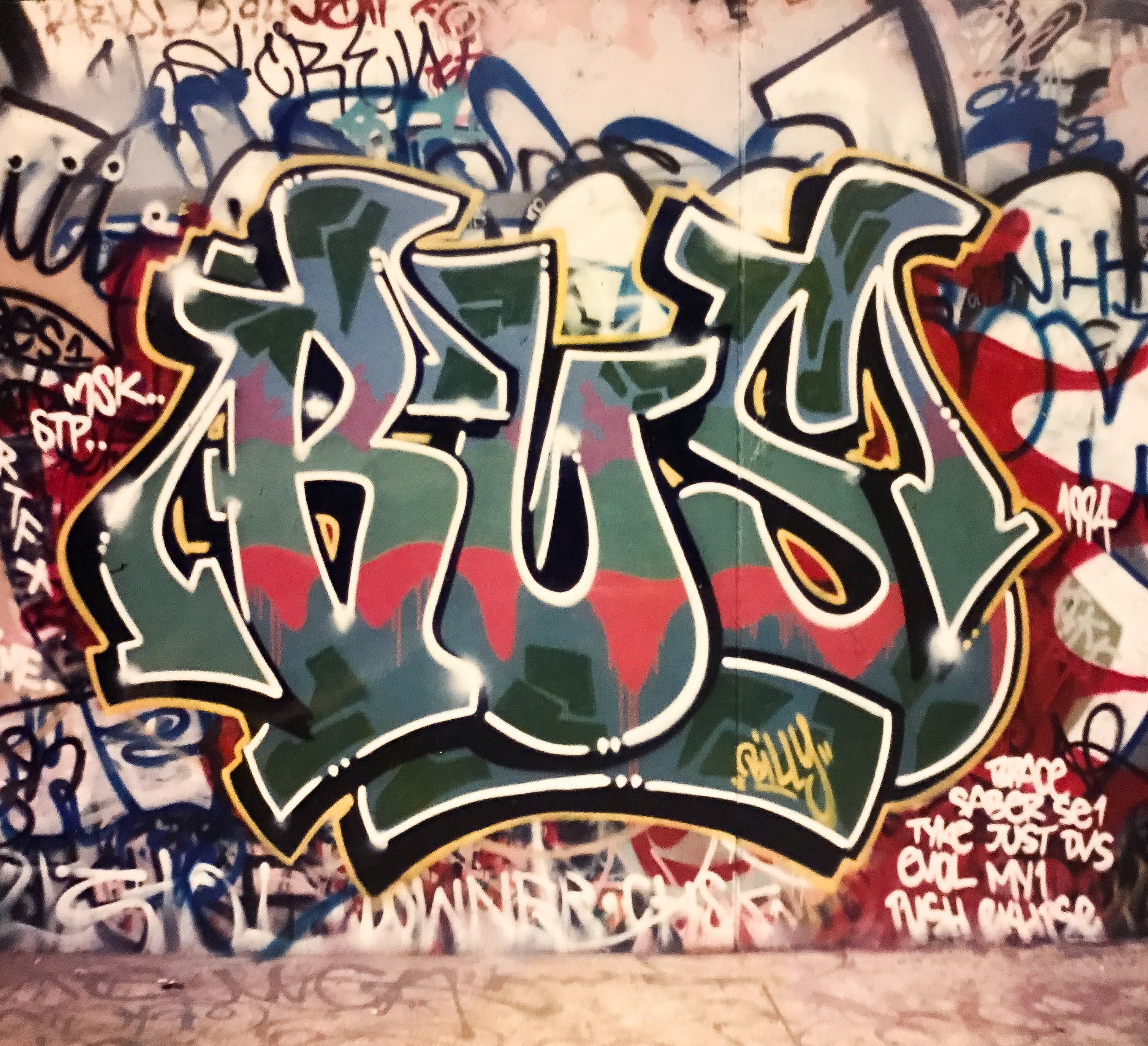 What is your favorite documentary or book that covers the history or major players of graffiti and why? Who do you think are the most under represented companies or graff artists in graffitis history that you think changed it for everyone?
I’m not sure that I have a favorite, but I really like Style Wars and Subway Art since they shine a light on a scene I always wished I had been a part of. Lots of other great stuff I’ve enjoyed like Infamy, Piece by Piece, the History of American Graffiti, Graffiti LA, The Legend of Cool “Disco” Dan, etc. As far as underrepresented companies or graff artists, I try to avoid conversations around that subject. 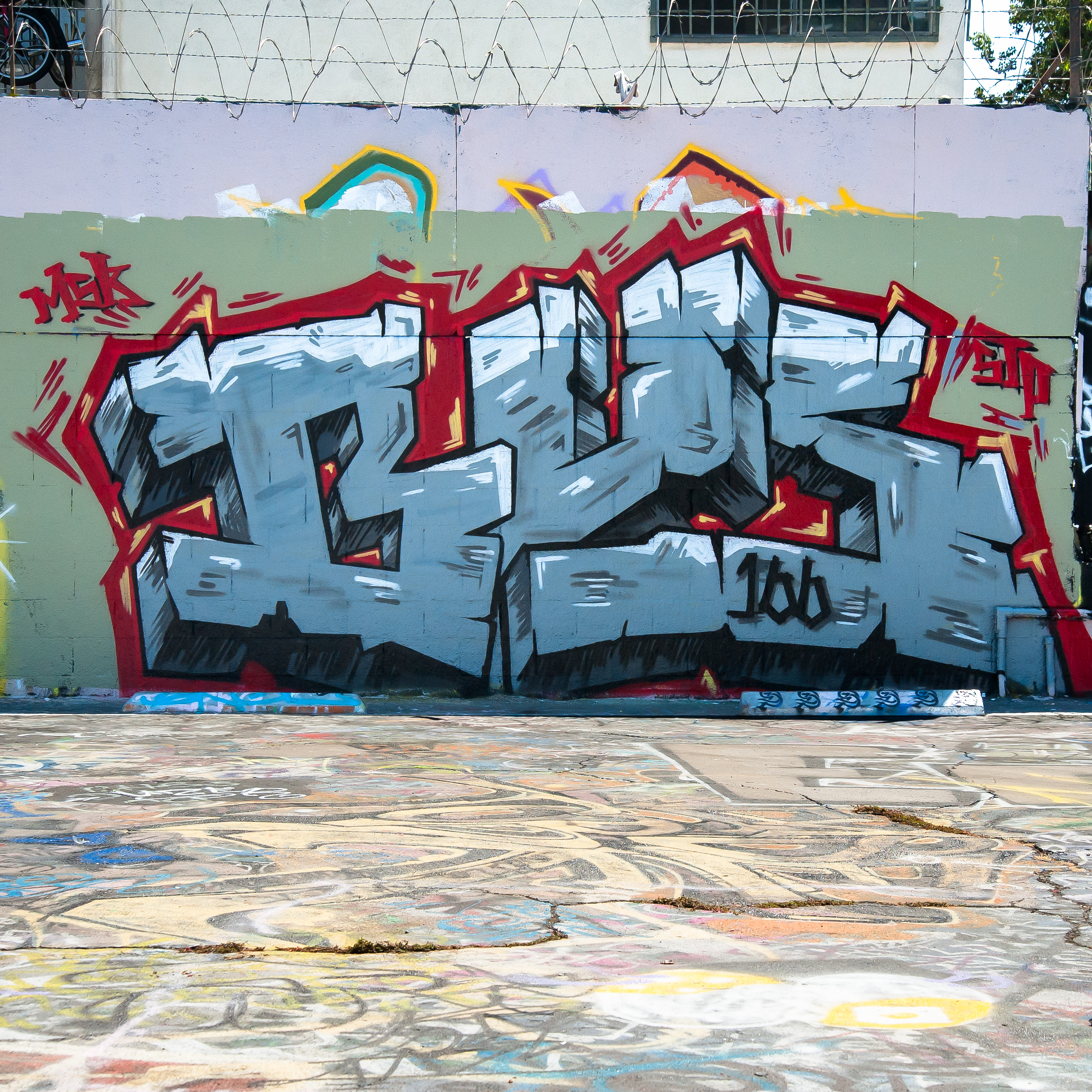 Do you do this as a fulltime career? If so how did you transition into this as a career, how long did it take you before you started making money off of it and what advice can you give to aspiring artists?
I don’t do graffiti as a career or make money from it, so I’m not sure that I can advise anyone on how to go about it. My career is more focused on commercial art; I own and operate a motion graphics company where we primarily create graphics for television shows. We’re also getting back into music videos that allow us to be a bit more expressive than the usual television projects we create content for. I usually do suggest to artists/graff writers looking to make a career in the arts to think about commercial arts like design, tattooing, sign painting and things like that. Since those ventures usually have a client looking for something specific, I find it a bit more straight forward to make a living doing it. You can at least have a career in the arts even if it isn’t as interesting as creating your own work without the burden of a client and still continue doing your own projects. 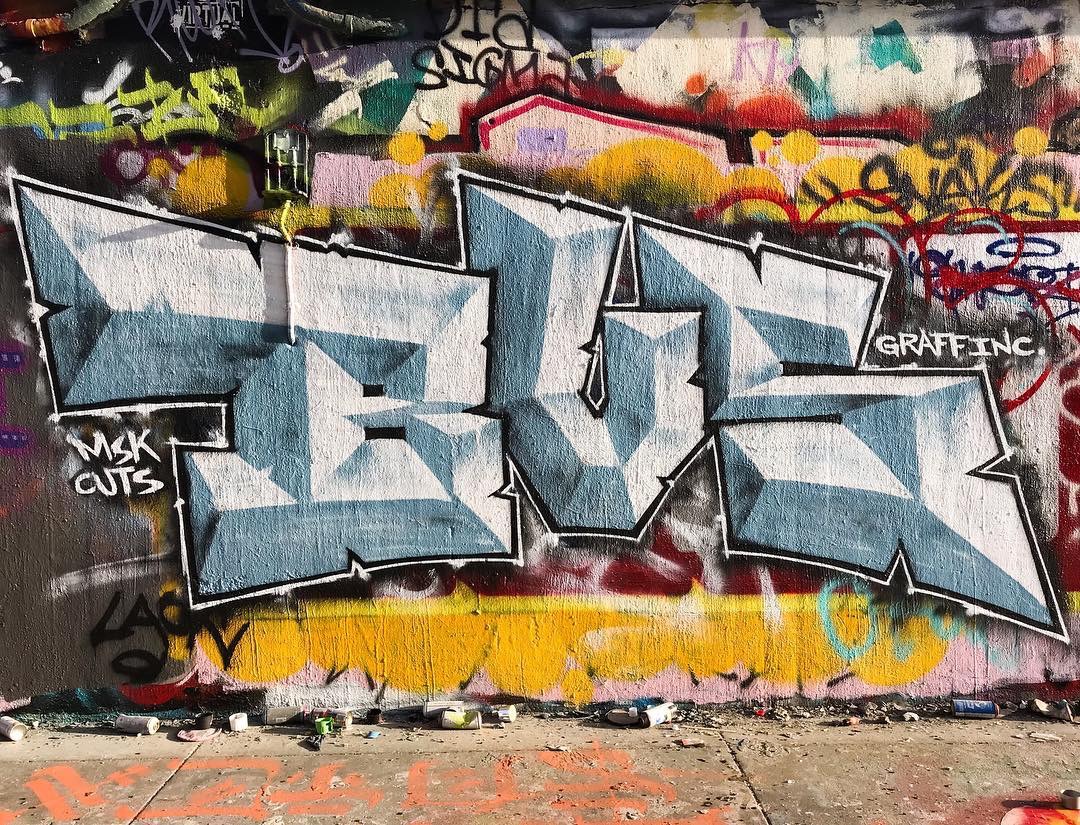 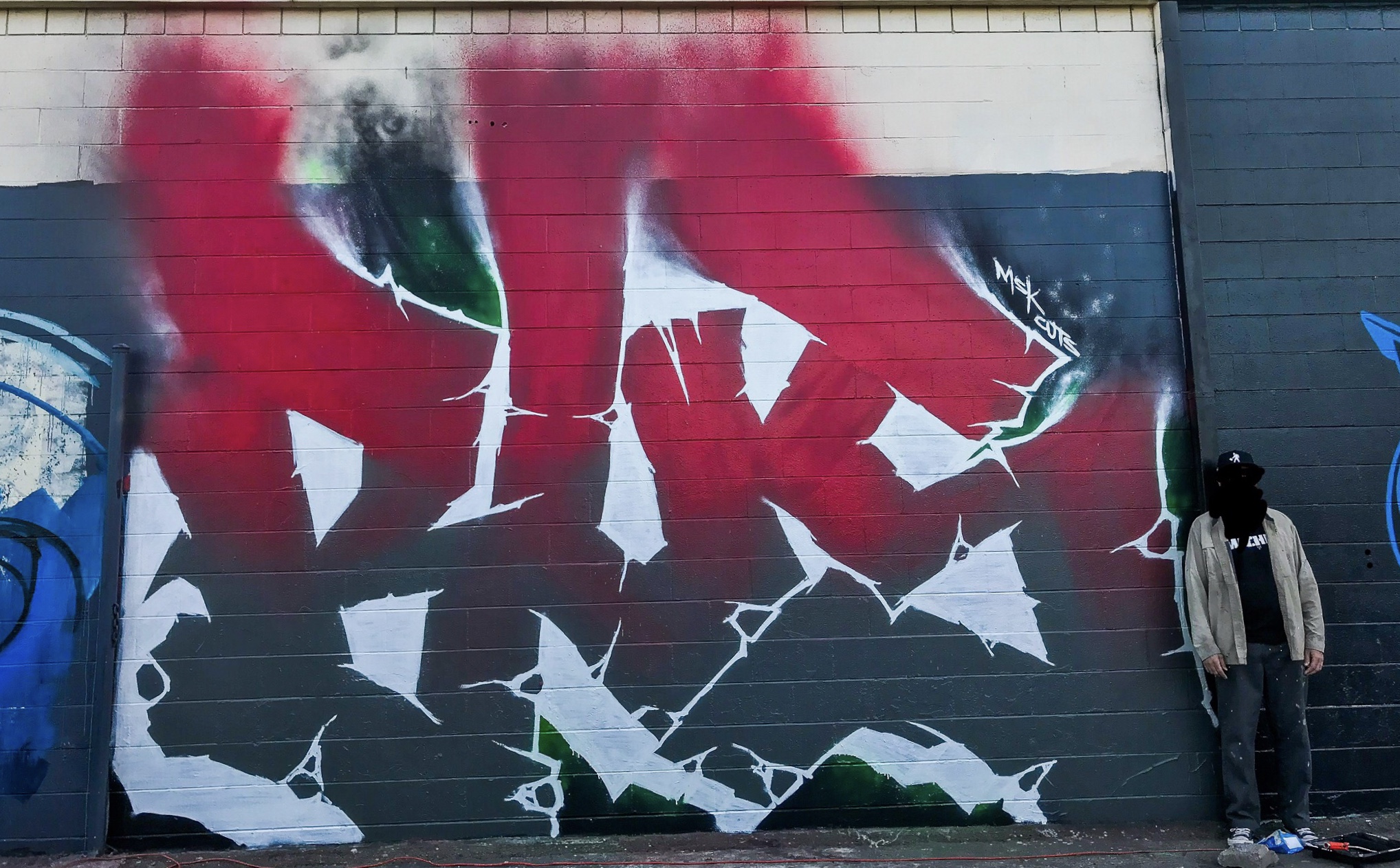 When you were coming up who were your biggest inspirations?  Who were the guys that inspired you to get into graffiti and what keeps you coming back now?
My early years were greatly influenced by MSK. I was an unknown writer when I joined, so it was really an honor to be in a crew with people I was looking up to at the time. We were young, active and competitive, so I found it very motivating trying to keep up with them. Gank/Gkae was my mentor and writing partner in the early 90s and was my biggest influence at the time. Eklipse was also largely responsible for helping me find a style back then. I was very inspired by everyone in the crew, but those two had a more direct effect on me. Outside of the crew, the list could go on for days and I would still miss a lot of people. Some of my favorites were writers I saw up on the streets I was bombing Tempt, Gin, Duce, Sk8, Pale, Sleeze, Chaka, Cab, Roc, Chrome, Sacred. Just gonna stop there, but there are so many more including just about everyone from the NY Subway days, but wasn’t directly exposed to that work. What keeps me coming back now is mainly facilitating opportunities for others. I get more enjoyment out of creating things for other writers to shine rather than doing my own work. I still like painting and growing as a writer, but it’s the giving back part that keeps me here. 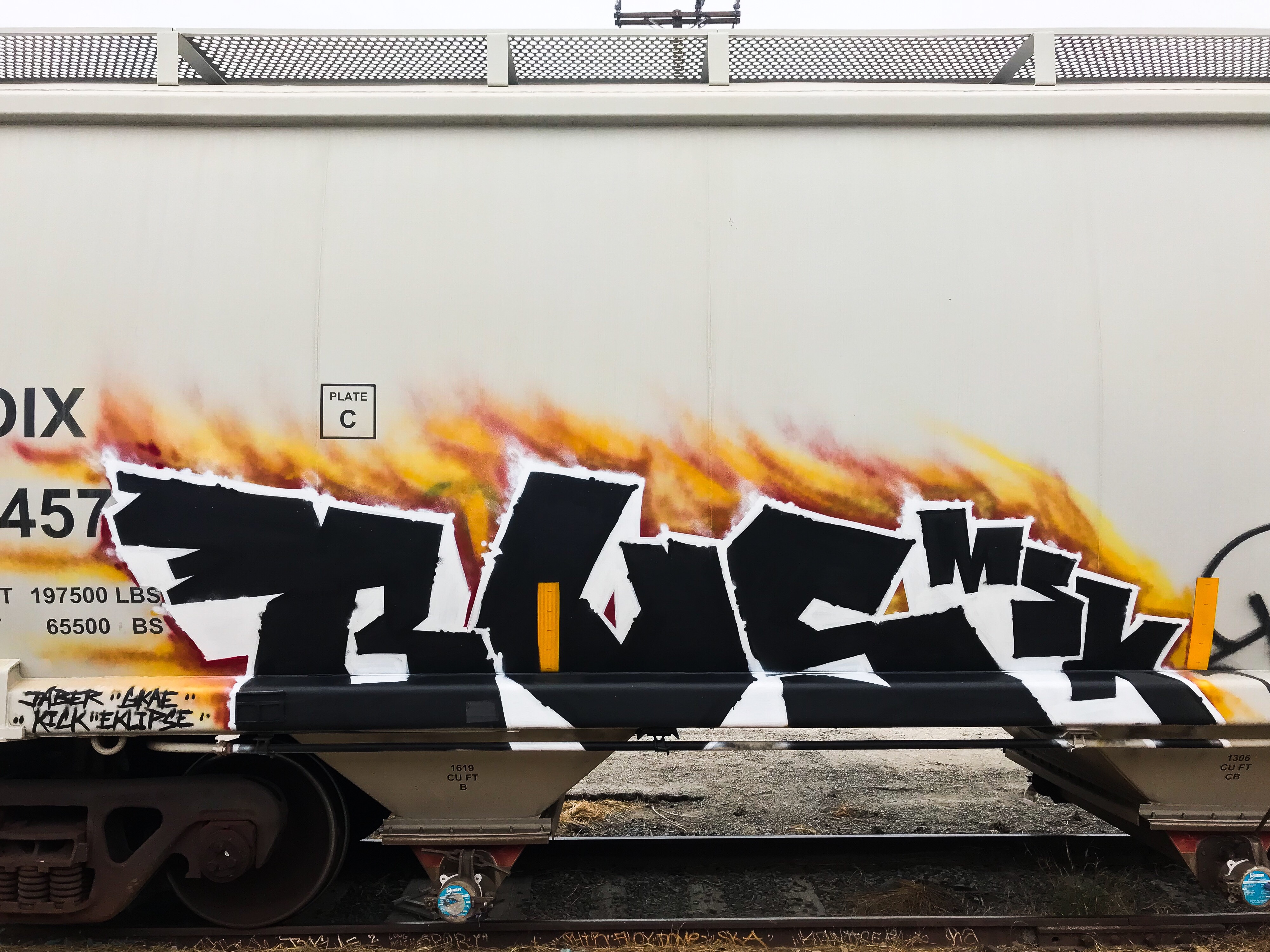 Any crazy travel stories you can share? Where all have you been in the world and where do you currently reside?
I’m not that much of a traveler, so don’t really have any interesting stories. The last traveling I did was throughout the 90s touring with bands. I did a couple trips as a guitarist for a band called Strife in the early 90s and did a couple tours as a bass player in a band called Eyelid from the mid to late 90s. They were great times and I did paint during those trips, but I flew under the radar. 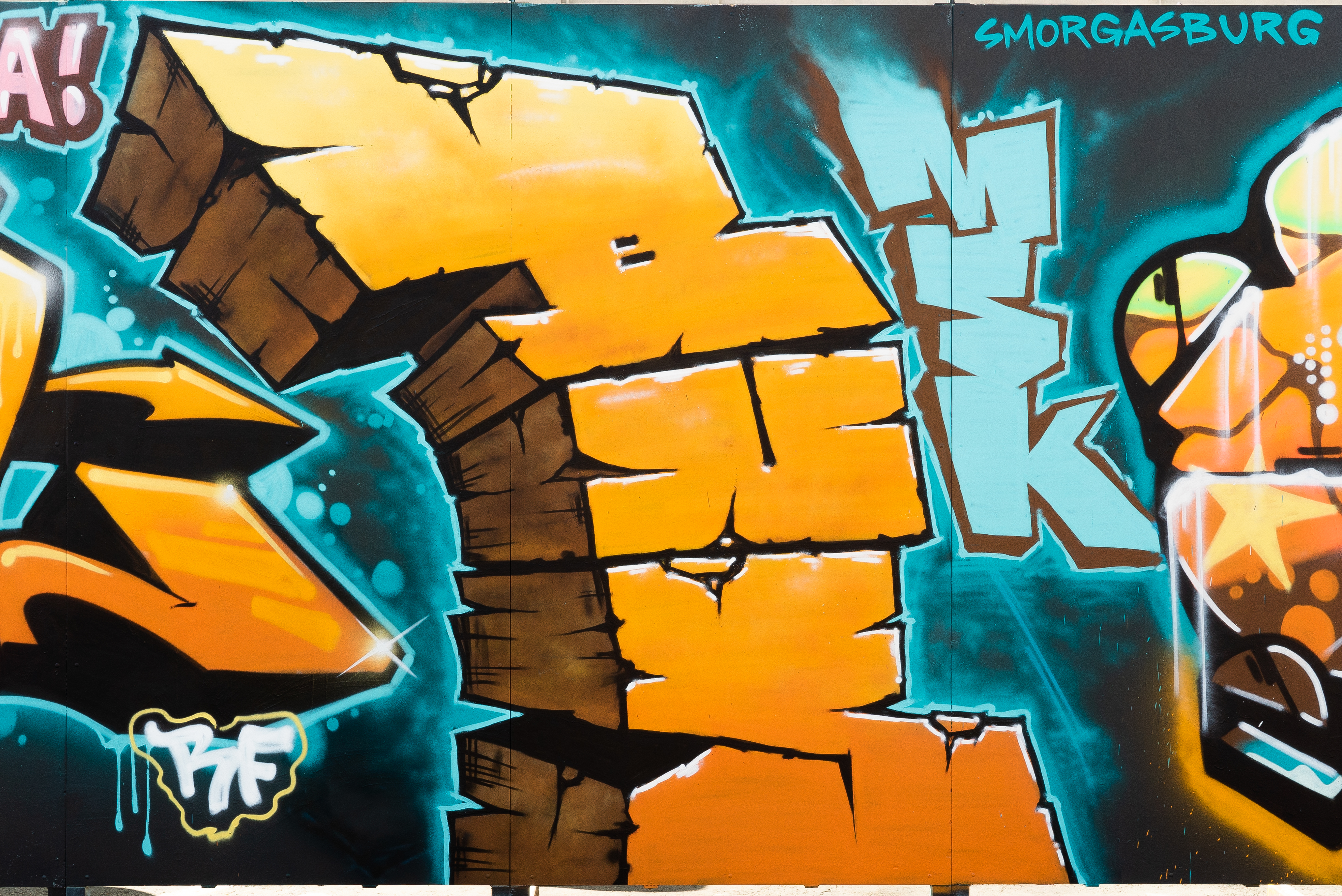 Any shout outs you would like to give? where can people follow you?
I always miss people when trying to do shoutouts, so I’ll skip that. People can follow my graff on Instagram @bus166. They can also check out all of the professional stuff online machineartstudio.com.
Interview by Wesley Edwards 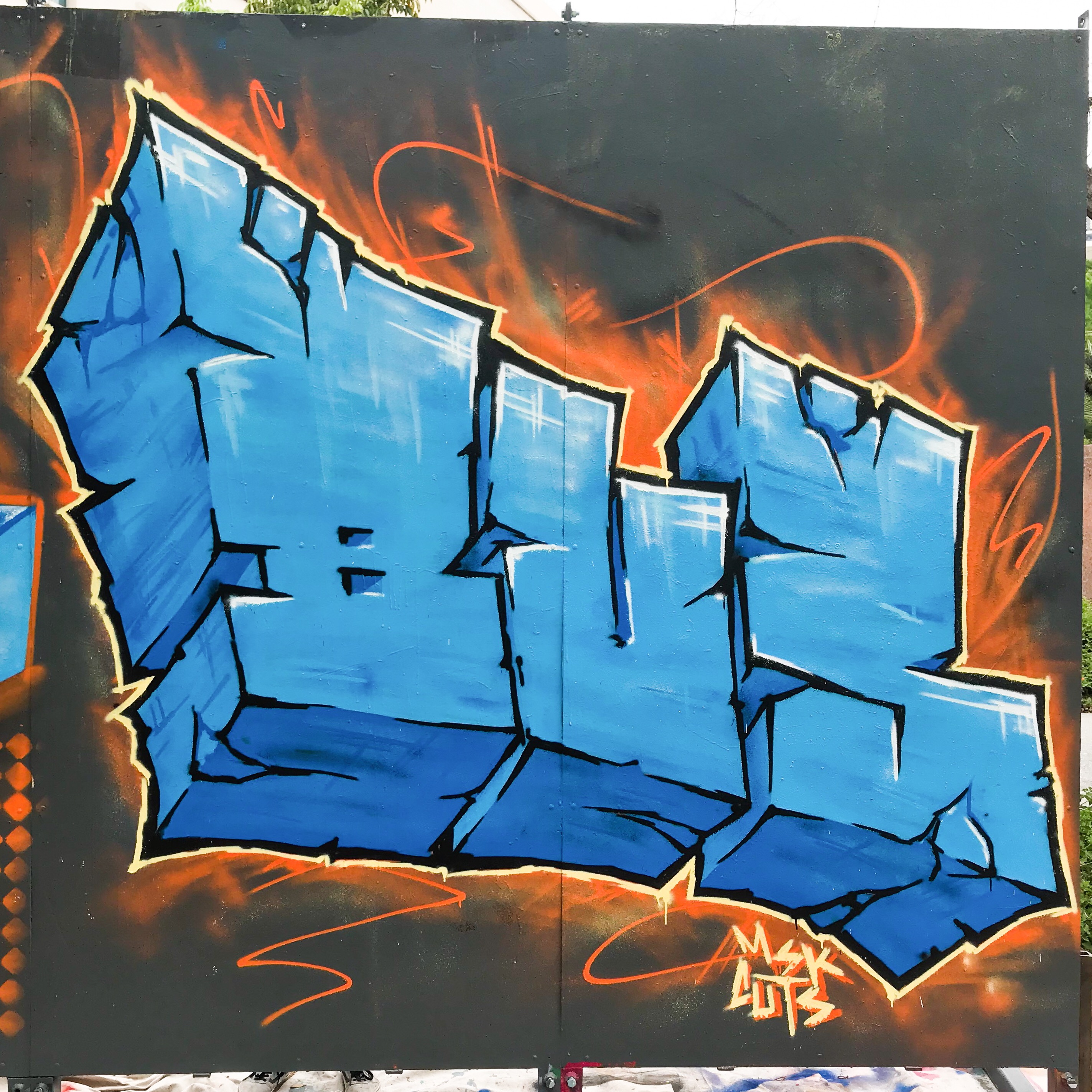