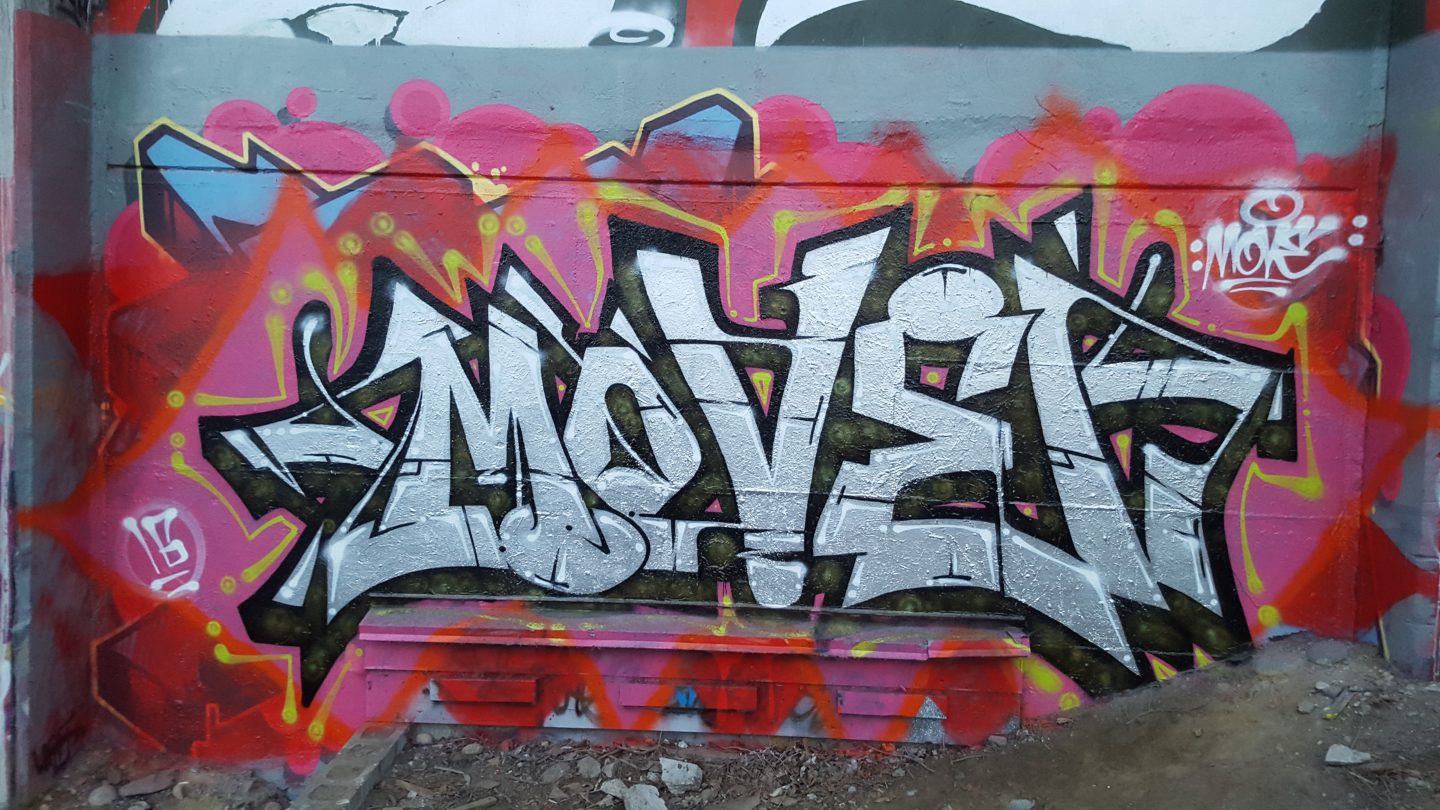 I am a vandal out of Vancouver, Canada that goes by Move. I paint walls, trains, trucks, buses, garbage cans, toilet seats… whatever is infront of me, you name it. I represent Ripset. 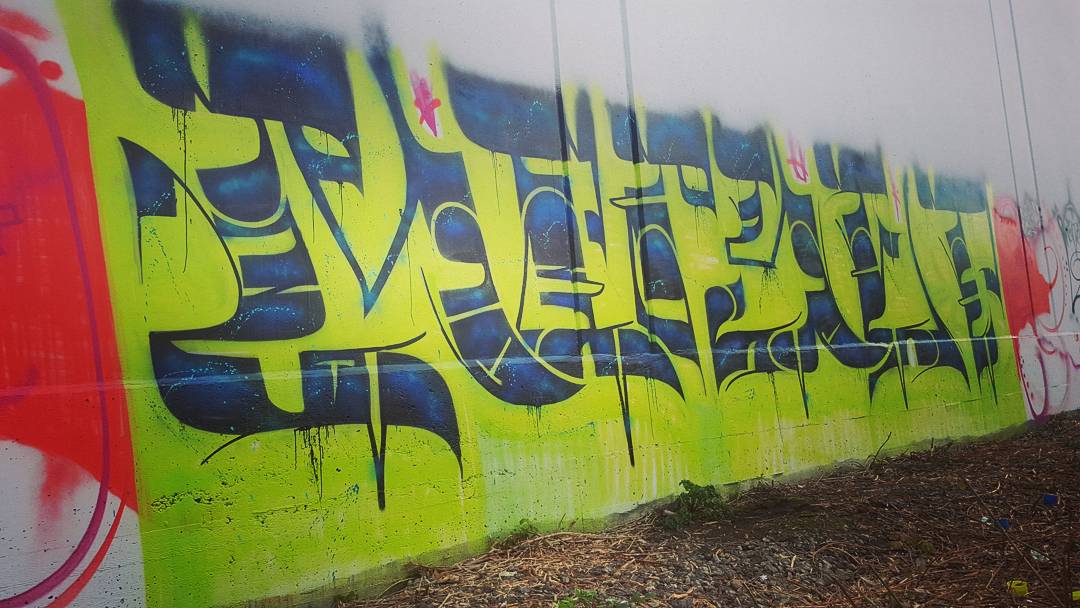 One of the things I noticed about your work is it looks like sometimes you draw your letters in very abstract script that almost reminds me of arabic script, I’m curious what your inspiration for this style was? What inspires you outside of other graffiti artists?

Well definitely Arabic script was an inspiration on my work but I would have to say my graffiti crew and the people I grew up around were the most. Growing up in my hometown at a young age, there wasn’t much of it around so whatever I saw while walking place to place had a major impact on me. Also nature is a major influence for example how the way ice looks when its cracking or just the shapes of random decaying materials I run into. 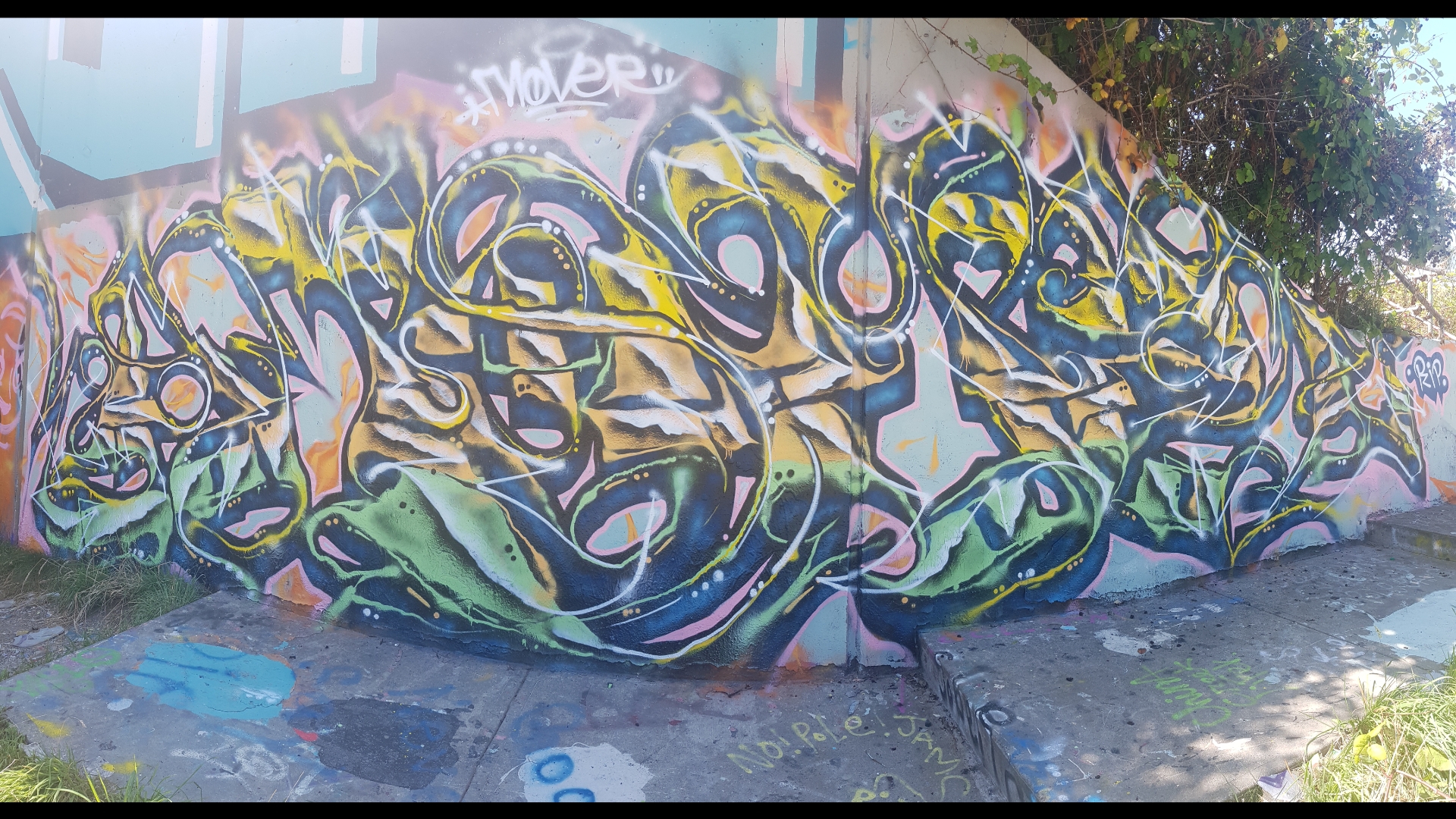 What is your favourite documentary or book that covers the history or major players of graffiti and why?

I always like Piece By Piece because of how they covered the history of San Fransisco. It was a well put together documentary with good editing. It wasn’t just time-lapse after time-lapse, it sheds some light on the history and is a pretty balanced film with interviews and such. 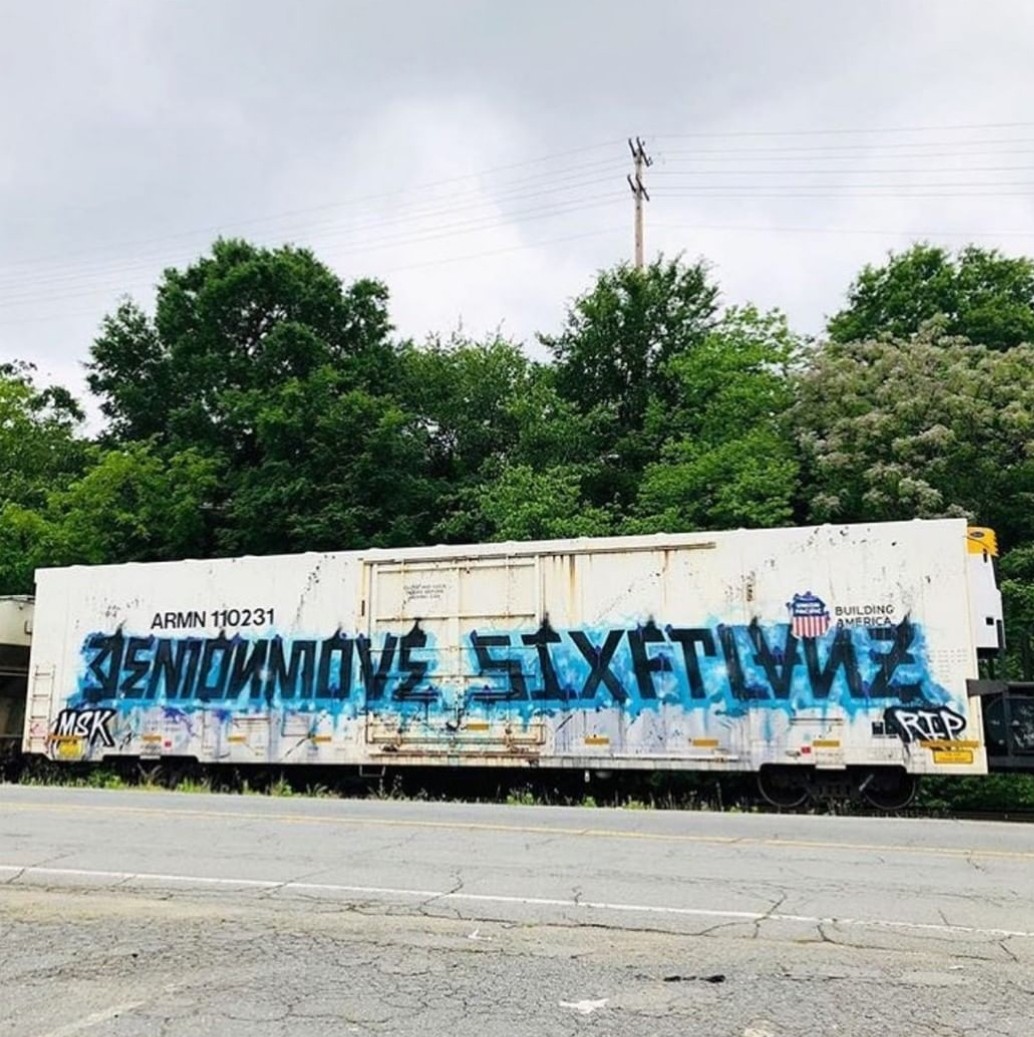 Some people do this for the high of throwing up an illegal piece on a train yard and some people do it to pay bills, where do you sit between these two? Do you ever see yourself doing for hire mural work or do you now?

I have done murals in my past but I am currently not interested in that. I will still paint the odd canvas here and there but I realized where I enjoyed myself the most was on trains or walls. Im not trying to be a Picasso or anything I know where I stand. I just like letters and believe graffiti is more or less, meant to be illegal. 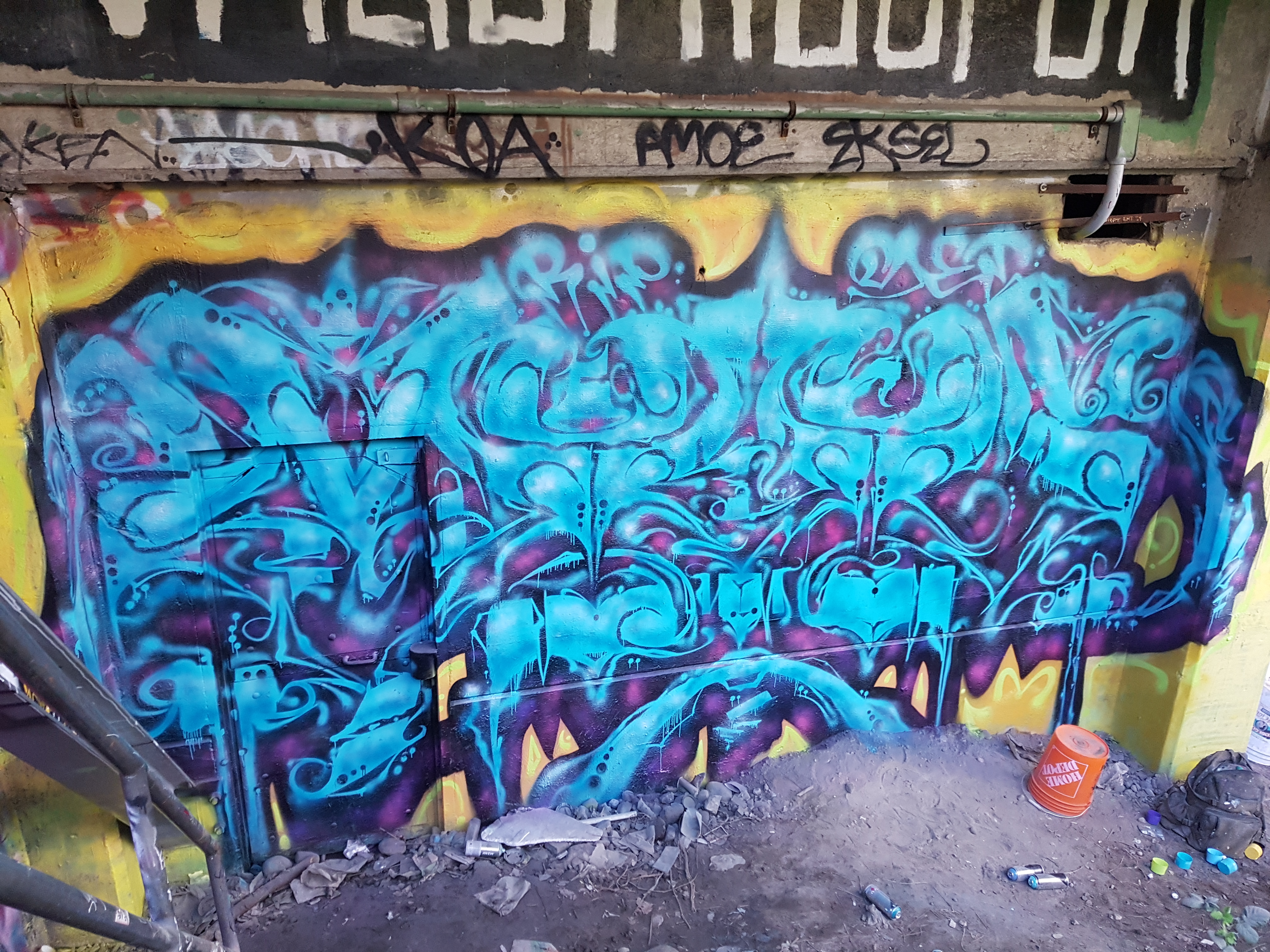 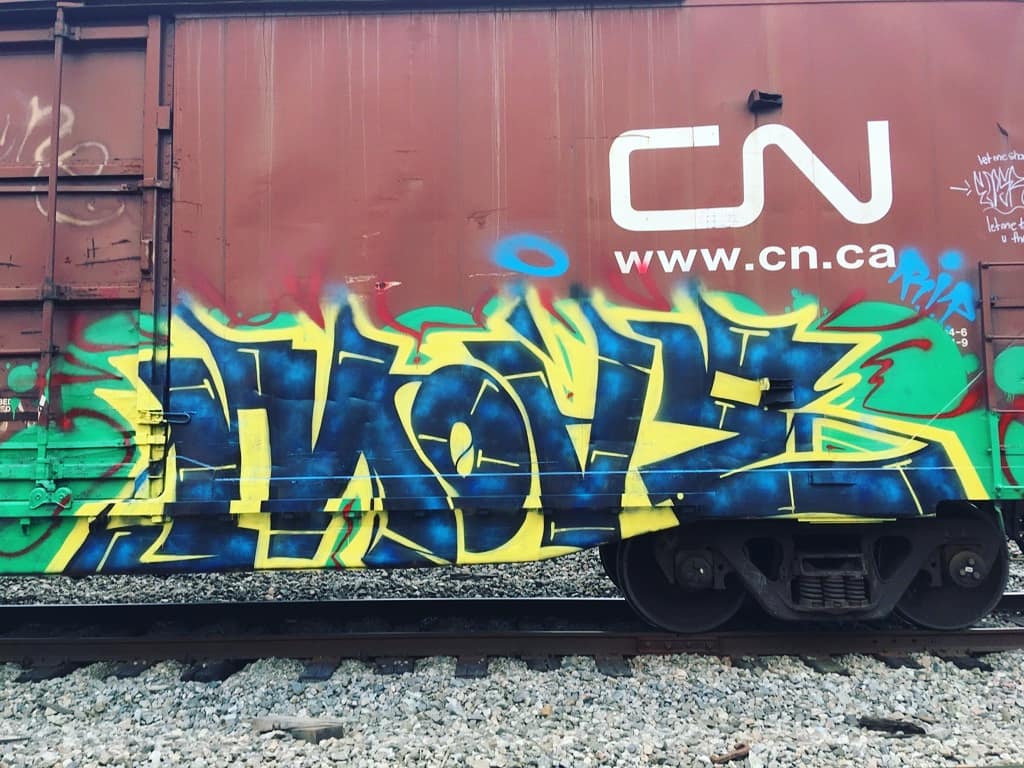 Since you started doing graffiti do you think the graffiti game has changed a lot, if so how? Do you have any thoughts on where it will go from here? Where do you see yourself in the next 5 years in the graffiti world?

Yes it has. You have a generation that think that having thousands of Instagram followers makes you a graffiti artist now. It seems a bunch of them think if there making money off there art then they are doing graffiti well. I don’t believe thats the mentality I’m going for.

In the next 5 years I see myself still painting with some more traveling. More or less working on different styles that challenge me and hoping to inspire others. 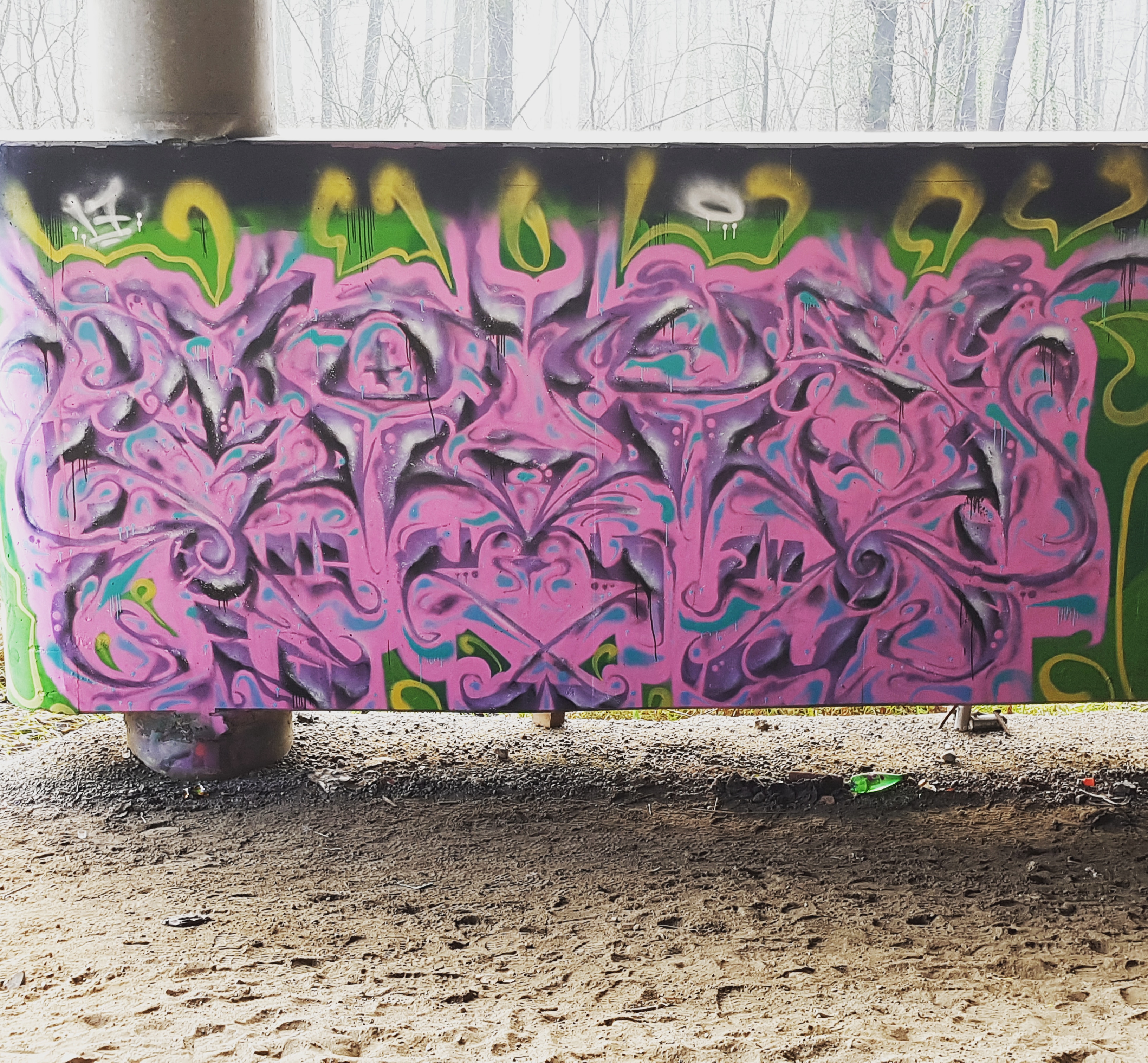 It changes often. It could be Breaks one day, Drum N Bass the next. A lot of Hip-hop, Metal, Punk, Ska. Its all over the place. It sometimes will depend on the style I feel like painting at the time. 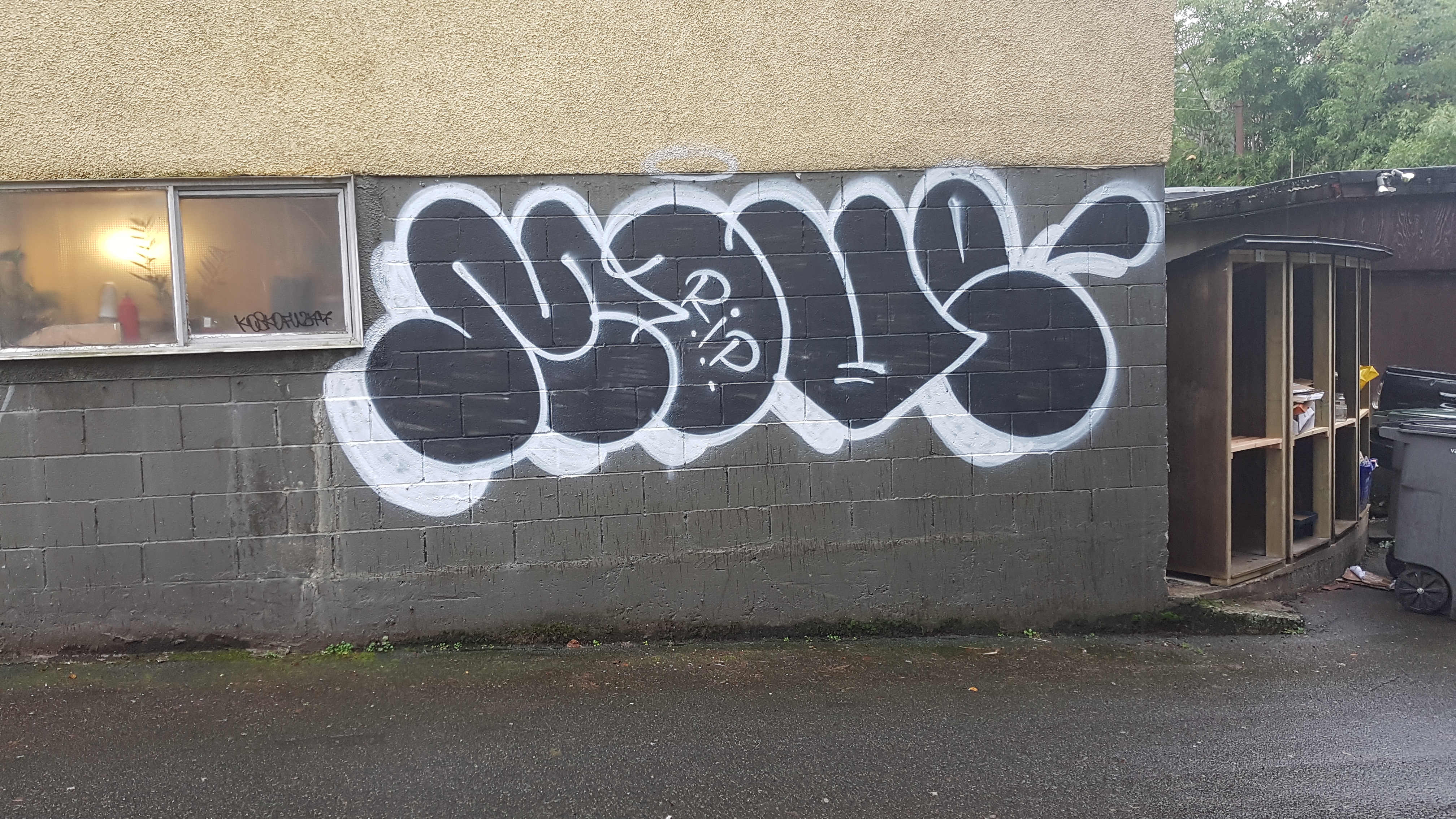 I’d have to say artists like Trik One, Jet One, Pesto inspired my early days of graffiti. My friends inspire me with the racking grind and the spots, but my style was inspired mostly by what they paint out in LA. The original city I’m from was heavily influenced by the work out there. Ripset definitely is what keeps me coming back. Looking at new innovative styles my crew-mates are working on is definitely my biggest influence these days. No doubt about it. 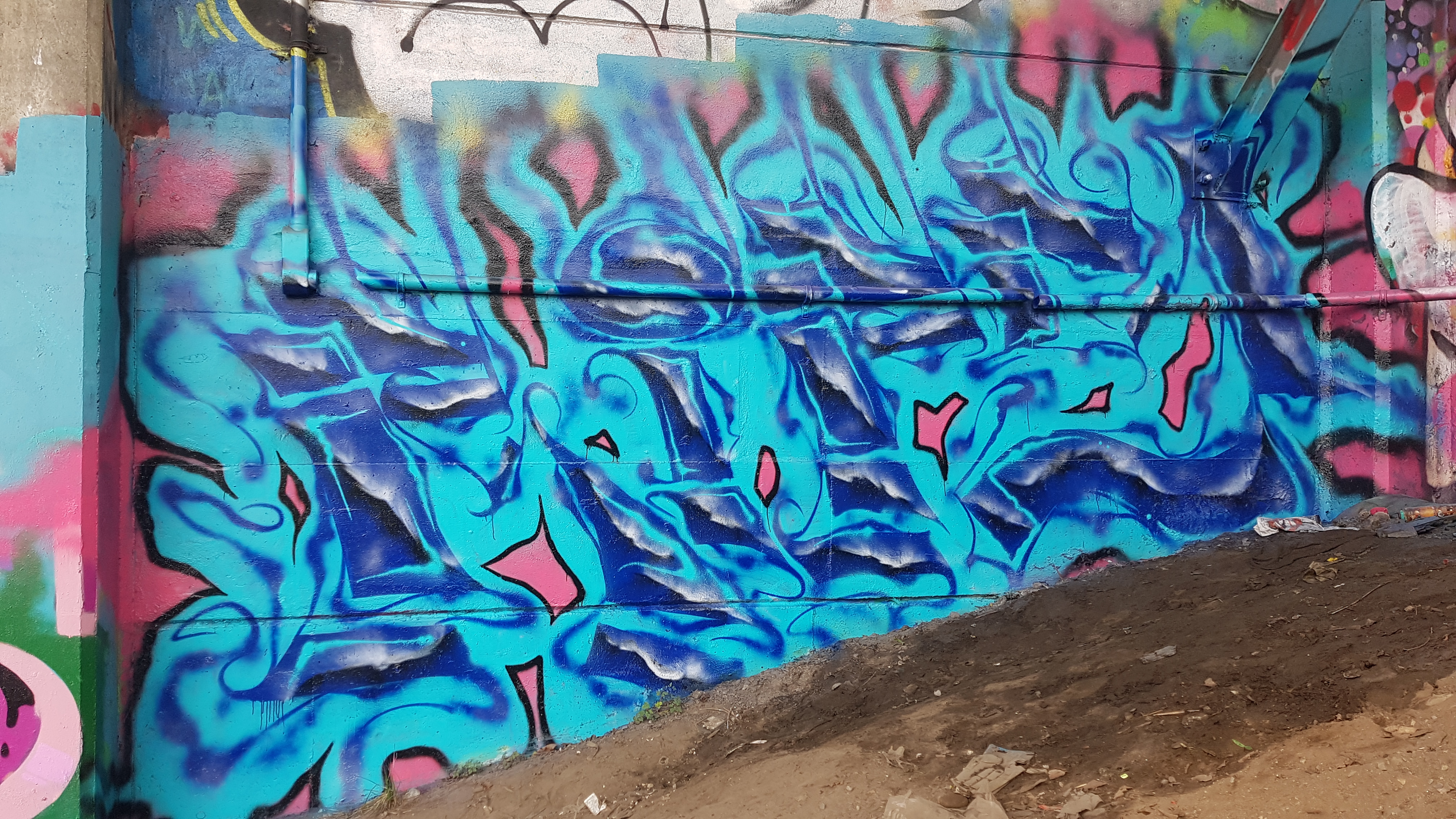 I remember one time arriving in a city here in western side Canada. I was biking home on a bike I had just racked and biked up a main street just doing hollows over windows on whatever street side buildings where around. I had that “tagging anything I could get my hands on” type attitude that night. I remember jumping into a random lot to paint some fence that was in a high traffic area right after seeing a cop or 2 roll by. I remember I was on my outline and as I looked back there was a cop car about to pull onto the street I was visible from so I decided to skip on the drop shadow. As I jumped out of the lot the cop car passed me but not thinking because I was a cocky little bastard at this time in my life, I tagged the front of the building roadside after. I didn’t notice at first but there was a quiet hum of a undercover cop car creeping up on me across the street just watching… I remember pretending nothing happened and walking away but they were slowing down, blocking off the entire road. They started getting out of there car and so I started walking towards them to have that “I know I”m busted” type look. As the driver of the undercover vehicle approached me, which by the way was not dressed like an undercover but was in full uniform, I decided to go back to my roots of sports and shuffle my feet quickly like a football player and bolted. I heard something metal hit the ground, at first I thought my backpack was open and the cans were falling out but as I look back I notice the police officer’s legs in the air and his back on the ground. The other cop decided to get into the driver seat of the vehicle and chase after me, while ditching his partner in the middle of the street. I ran for the backyards of houses and the cop in vehicle tried to scare me out with its sirens close by me. I remember every backyard having lights with sensors so that didn’t help at all. I ended jumped about 7 of those bastards or so until I got to a backyard without a light going off and decided to take off my backpack, my hat, jacket and ditch em. When I get in chases I just listen to my intuition and it told me to jump the fence toward the alley, walk up to a door of a random apartment or house and pretend to open it like I lived there. So the cop drove into the T-intersection alley looked at me with his headlights while I had my hand on a door knob pretending to open it and he drove away. I walked across the street after insight of the crime scene and the police officer was in the middle of the street holding his knee in pain rocking back and forth so I just assumed he fell weird on his knee or something. I guess the sound of metal I heard must of been his belt with all his gear hitting the ground. Goodtimes…

I have been all around western side Canada and to a bit of eastern side. I backpacked town to town all over western side canada for years before the internet really took over graffiti out here. It was something I was told you should do if you were gonna be a writer. I backpacked from LA to San Francisco once. It was nice to be able to hit towns in between those major cities. Ive been out to Seattle, Portland, Alaska, Mexico, etc, etc. I really hope to do more traveling in my future though. Right now I currently reside in Vancouver, British Columbia, Canada. 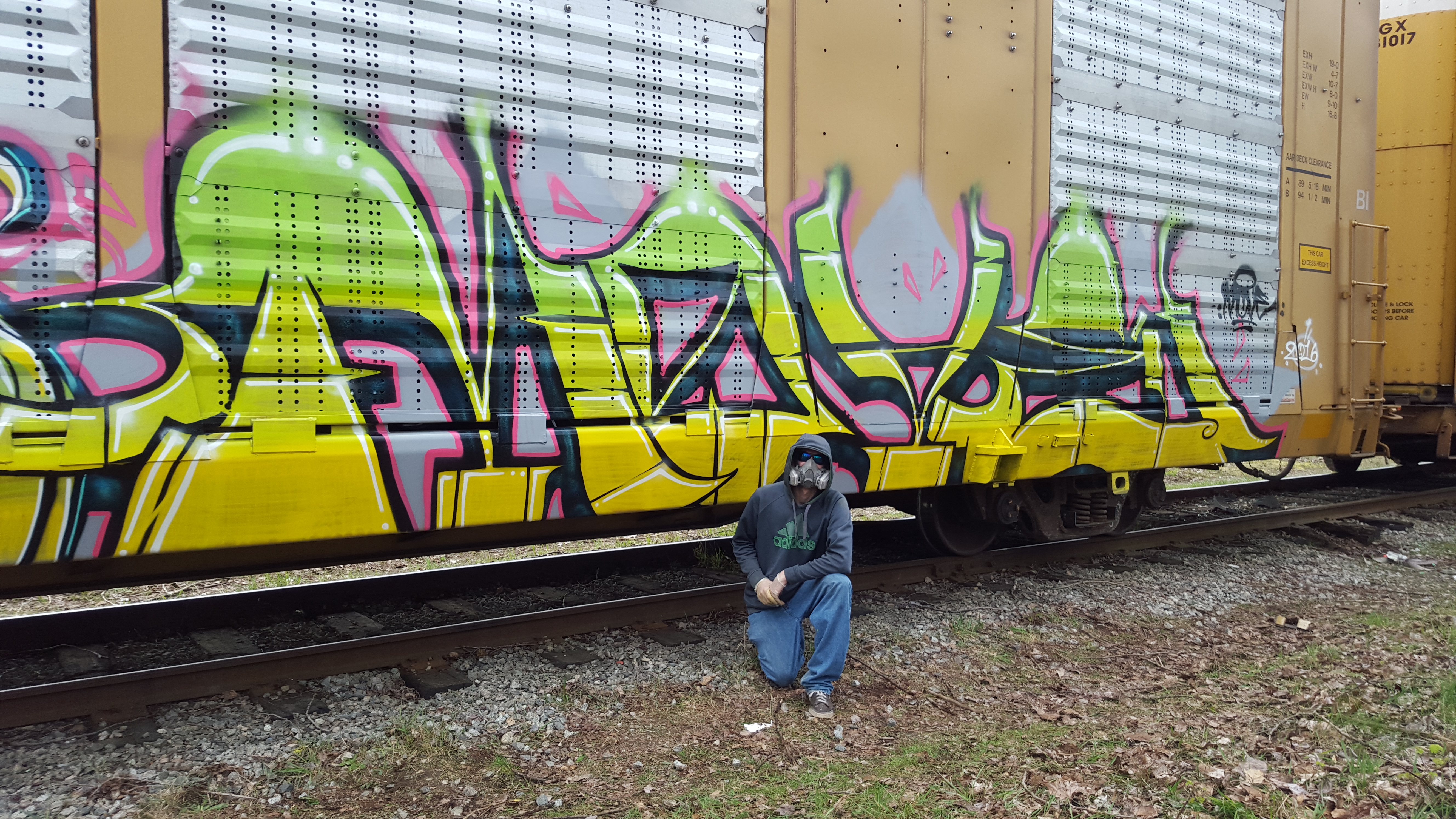 Yeah, Id like to shout out Porfas, Nasty, Sixfoot, Demon, and the rest of the Ripset Family. Id also like to shout My Family back home, My Friends, and My Girl. You all know what sup. Rest in Peace Dmize & Hobit. 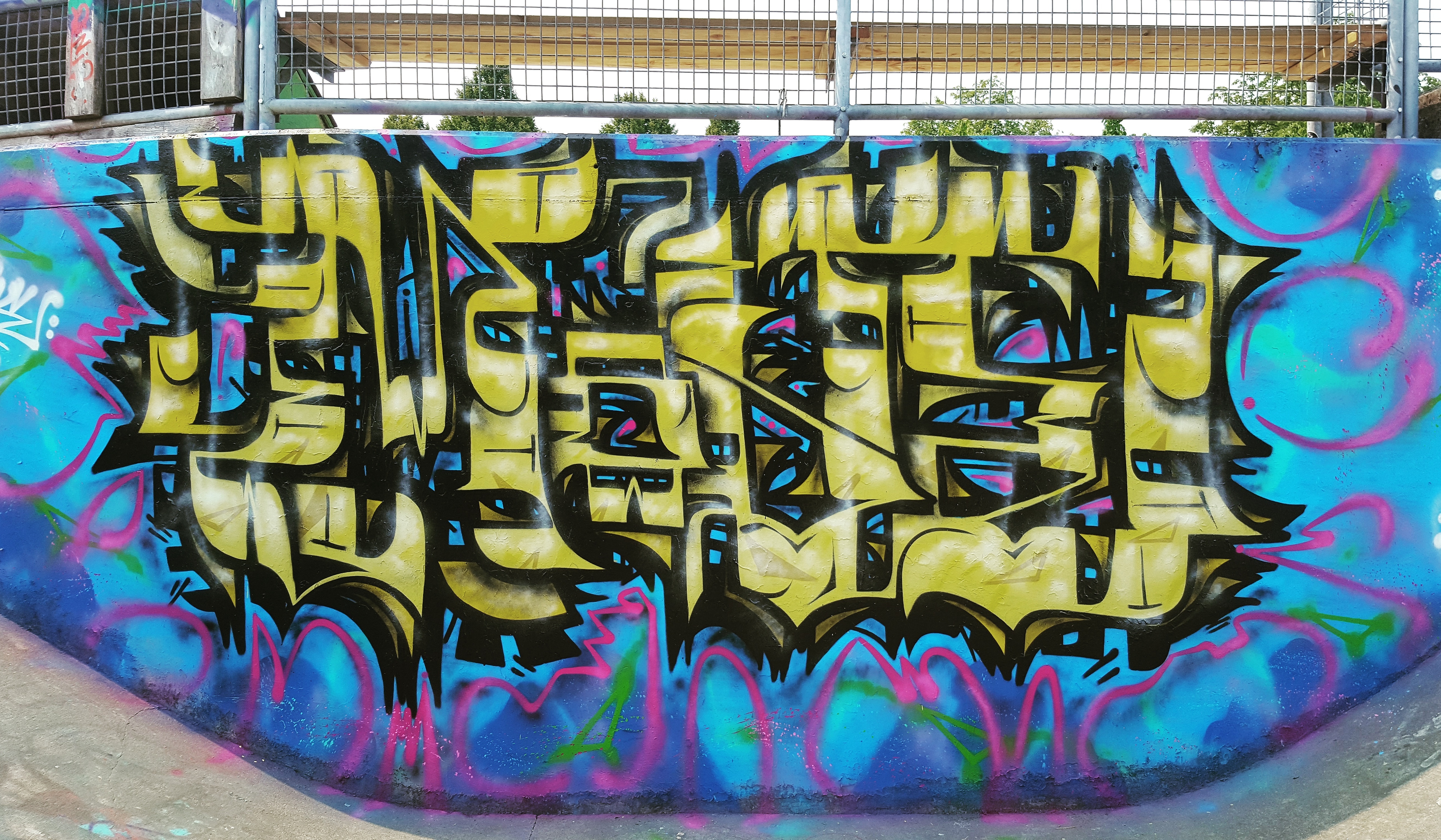 Thanks bombing science for the interview. Much Appreciated. 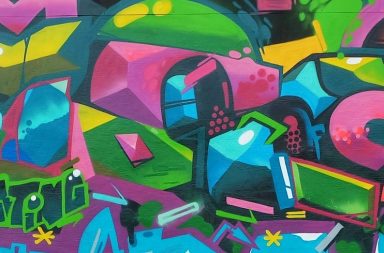 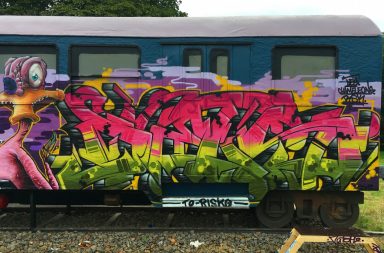 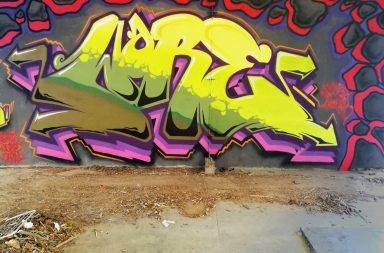