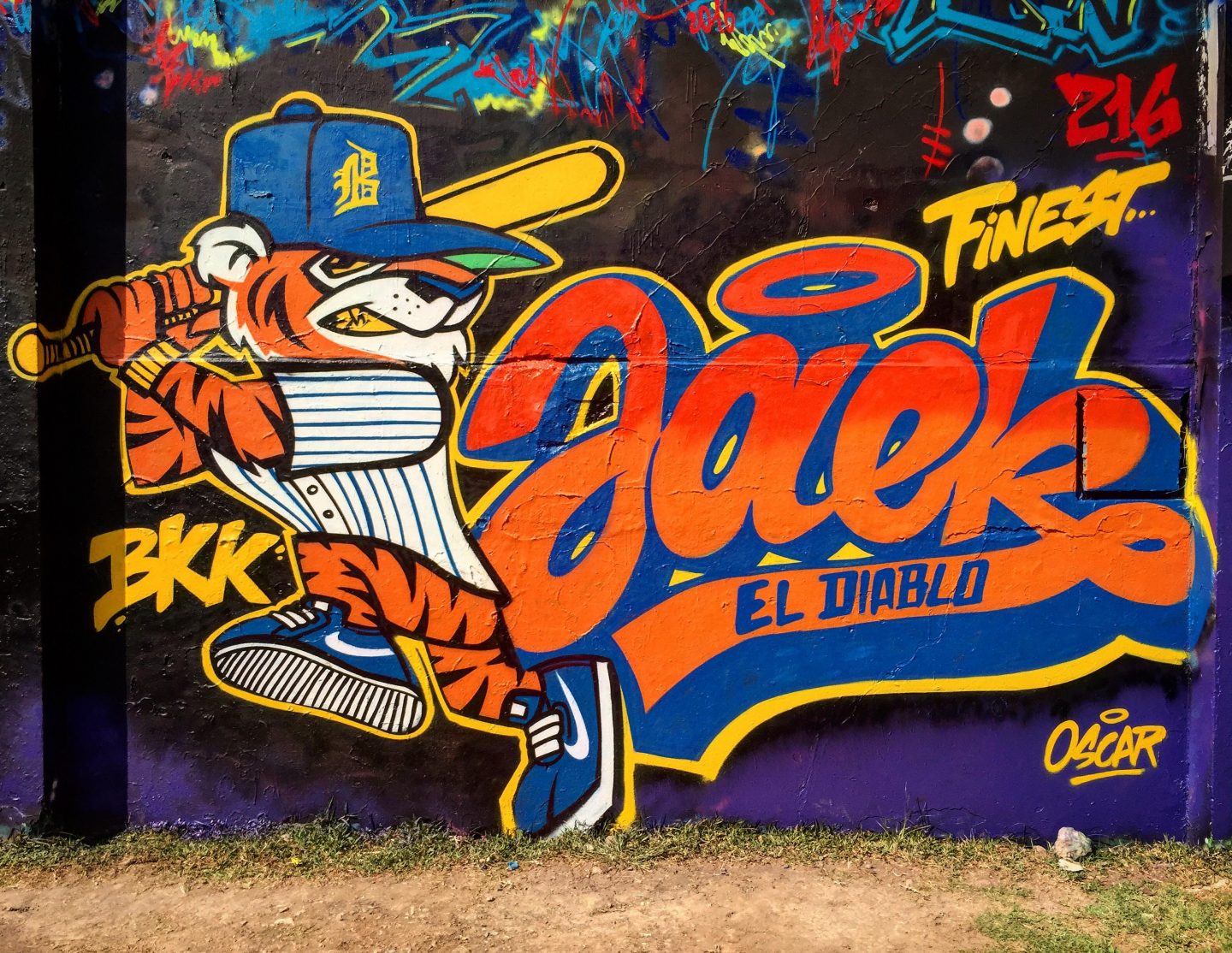 Jaek El Diablo is an inspiring artist. Whenever you first come across Jaek El Diablo’s art you feel an instant connection with him and his work thanks to his use of culture references that bring back a strong feeling of nostalgia for your childhood, and with that he can reach people all over the world from his home in France without saying a word. “Just like Hip Hop remixes sound, or Tarantino’s films mix genres, I enjoy sampling, mixing, scratching cultural references that are dear to me in order to express my own graphic style. ” With more than 10 years of experience under his belt, he was nice enough to sit down and talk to us about his art and where he came from to get where he is now. 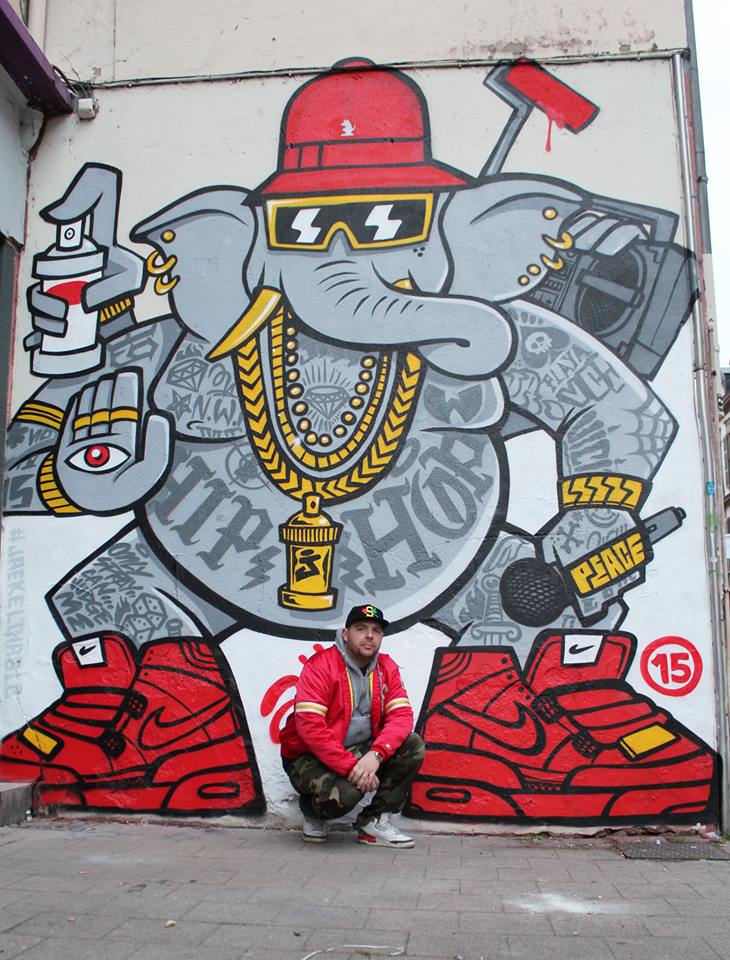 I’ve looked around online for interviews with you and it looks like the only interviews I’ve come across are in French, for our American readers can you tell us about yourself? Were you always an artist or was this something you picked up on later in life? What was the graffiti scene like when you first started?

My name is Jaek el Diablo, I was born in 1977 and raised in Strasbourg in the north east of France.

I’ve been doing graffiti since 1993, and I became an independent artist with my own freelance business in 2004. Outside of graphic design, illustration and painting I’m also a designer of my clothing line brand called Vicius Clothing. I also DJ and organize our own Vicius Party.

I’ve always drawn ever since I was a kid and I think drawing and art from such a young age saved my life. Pop culture, cartoons, animated movies and video games, like Hanna Barbera ,Disney or Marvel comics were my first inspirations and still are a source of inspiration today.

Later when I was 13 I began to skateboard and from this I discovered punk rock, hip hop and the alternate subculture that graffiti belongs to. The designs of Jim Phillips or what Sean Cliver did for Santa Cruz and Powell Peralta was another inspiration for what I do now. When I was young I used to tag illegally before I made my way into doing art legitimately. 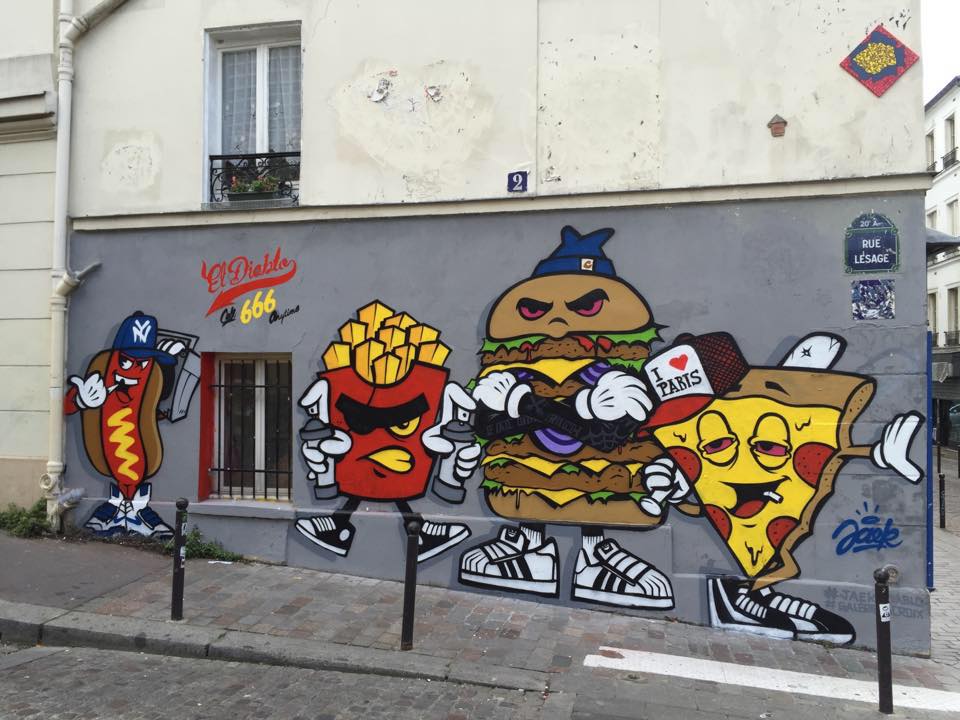 You portray a lot of American cartoon and comic influences in your work, has anyone ever complained or came after you for using their characters? For example, Disney is not shy about suing tattoo artists or even people like Dead Mau5 for using art similar to their properties.

Not really for the moment, a lot of artist use pop and iconic characters as a parody. I call it Brandalism, its like vandalism but its taking aim at the corporate world. You know its kinda like in Hip Hop you use music samples, or in a Tarantino movie you can mix it and create you own version of something that already exist to pay homage or make a comment. I come from the 90’s, I’m an old school guy and when I see the subway art I see a lot of pop and iconic charterers like Smurf or Bode on trains as just another part of our remix culture. Artists like myself, Seen or Kostas Seremethis we get away with it on this level and I’ve never gotten a complaint or been sued. 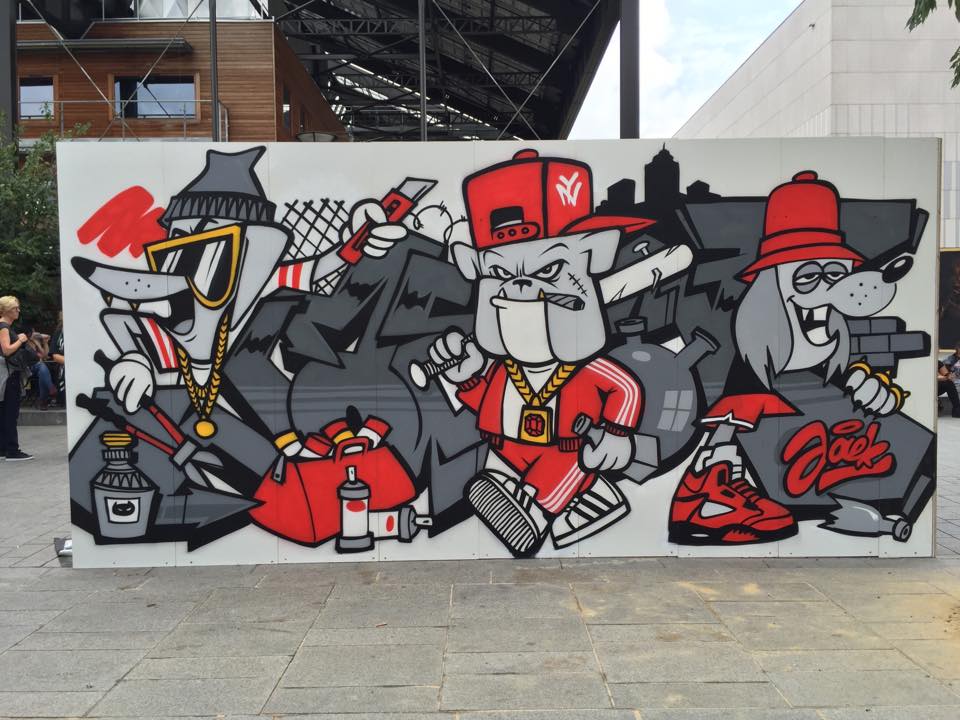 In your early days did you ever have any run ins with police or authorities when you put up your graffiti art?

Yes one time, Police caught me and other writers during a festival where we painted on the train yard, I was under legal majority there so there was no legal proceeding. The second time its was a long time ago in the street when I was tagging after a party. I was drunk and I got caught by the undercover police, they came running after me trying to fight me and I punched one of the fucking pigs in the face. He tried to grab one of my cans and spray me in the face but I escaped. 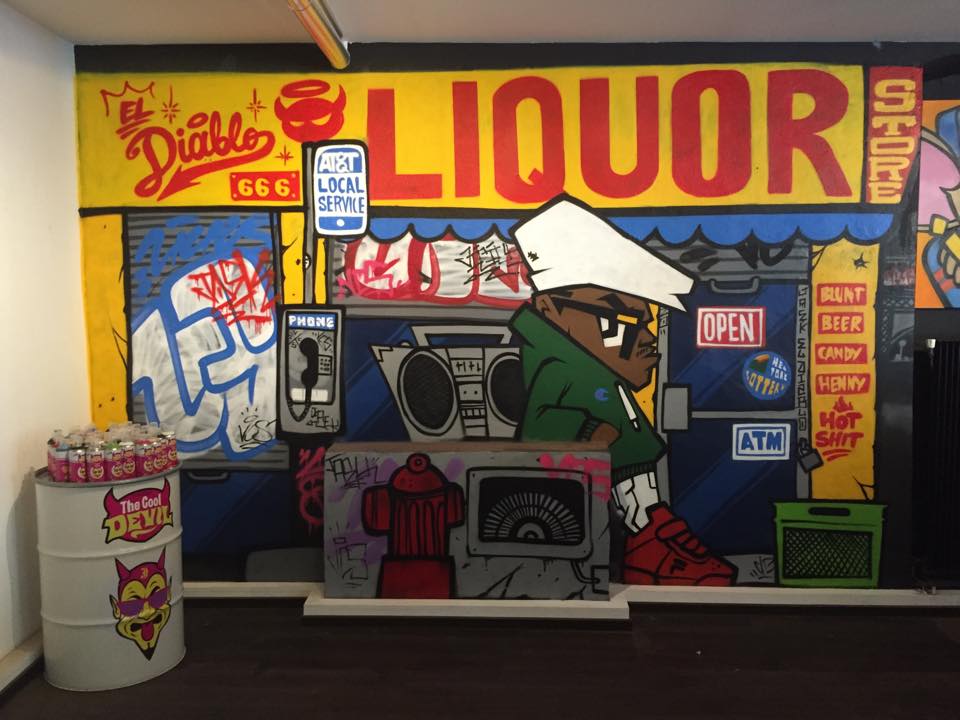 Whenever you first started out, who were the graffiti artists that inspired you?
The first guys that inspire me was the local tagger of my city and after when i discover Subway Art and Spray can art for me the best was TKID, GNOME, STASH, CES, COPE 2, BATES, MODE 2, and BANDO. ALL the 90’S artists in the PARIS scene such as Colors, Boxer, Oeno, SDK, TPK, GT, and NTM Crews. That’s my graffiti base and inspirations. Nowadays I would say the graffiti writers that I like are guys like Rime Msk Revok, Wane, Ewok, DFace and others.

When did you start making a living off of your art? What inspired you to diversify your talent into other avenues like your clothing line and illustration?

Graffiti raised me, and I learned all the graphic design software by myself. I learned it so I could get a clean line that I use on the wall with tools like illustrator and put my design on other media like t shirts, silkscreen, or video art.

I’m a curious guy, and I would consider myself a Jack-of-all trades. I always want to try new tools or new media to expand my knowledge and advance my art. After I got my Masters degree in 2003 I wanted to develop Vicius, my clothing line, to be independent and do my own business but I quickly found that it will not be that easy and I had to make a different proposition and diversify my offer and my skills. Naturally I found some work within the communication agency, doing logo designs, illustrations or flyers and at that point in 2004 I had already established myself as a freelance artist. 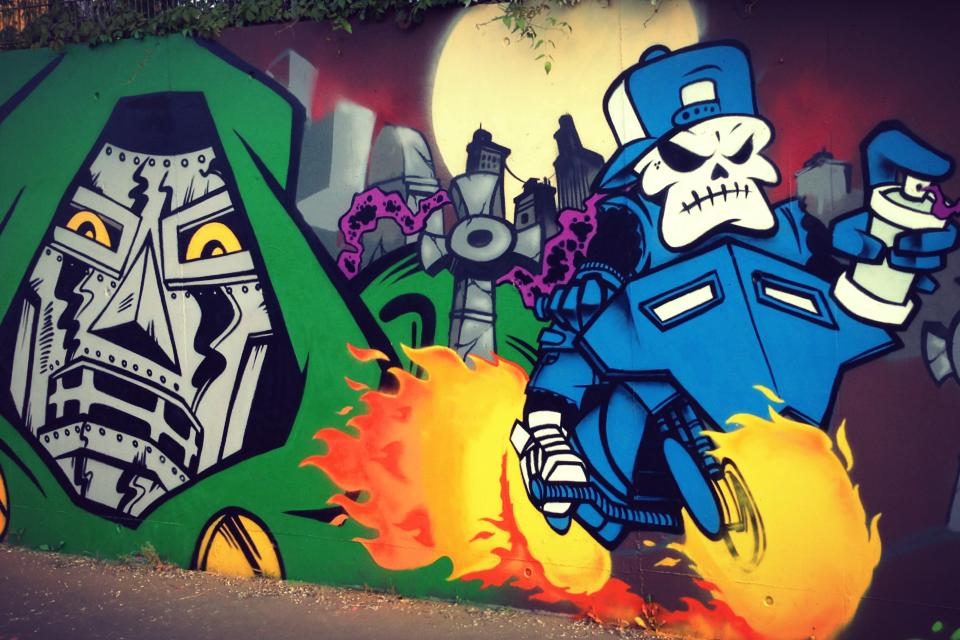 Speaking of some of the other things you’re involved in, can you tell us a little bit about the Vicius Clothing line and what got you started making your own clothes?

About Vicius Clothing, i ‘m a big street wear fan and sneakers addict, for me streetwear and fashion is a new discipline in Hip Hop Movement. I do my thing with Vicius like I do my graffiti, its a passion and a way to express my art. You can find in Vicius a lot of reference and homage to what raised me in hip hop culture and punk rock culture, I use same system and porody logo or illustration. 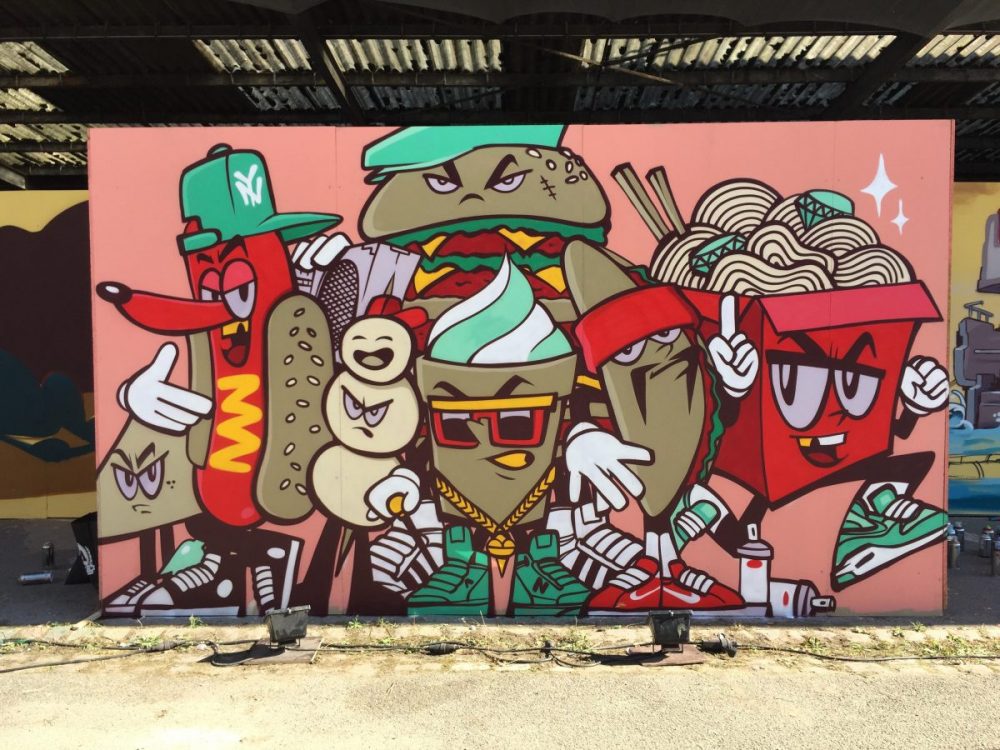 How many black books do you fill up on a regular basis and how do you think this helped you learn your sense of design?

I think I have 5 or 6 black book that I fill during my young age most of all are fill during my school day, I was bored by my professor it was a way to escape and train my skills. I think black books help me to have consistency in work and I used to try to do one shot finish designs, but now I have a black book but there is more sketches than finished drawings. Its more of my travel book of sketches then the thing that i put on my walls.

Making a living off of art is becoming easier and easier thanks to the internet bringing people closer. We are also becoming more aware of the amount of talent that is out there. Who are some graffiti artists that you like to follow and grab your attention these days?

Yes of course internet is a fantastic tool to be aware of the actuality of the game. I think it also that accelerates the way we share graffiti, its almost like a virus. Every day I am surprised by new talents especially on instagram, its crazy! Its also a good way to stay connect with the people that are from where your from. For example i ‘m often in NYC and I can always check the last pieces of my writers and friends that I like to paint with like Wane Cod, Yes one, Ces Fx, Tkid, Ribs, Doc Tc5 or Pro 156.

For me the people that I discover by instagram are artists like Does, Pshine, Faker, Ermsy, Shane, Mast and more. Funny enough I discovered you guys on instagram too.

For artists that are coming up and getting started in graffiti is there anything you notice that amateur graffiti artists don’t do that maybe they should? Is there any kind of practice or something that helped you along the way that you would like to share with artists looking to improve their own work?

I think for the newcomer I can only give the advice to just enjoy what you do and share you love and passion and be positive.
For those that believe that being an artist is easy and cool you must know that its not that easy and every day you have to fight for your art. 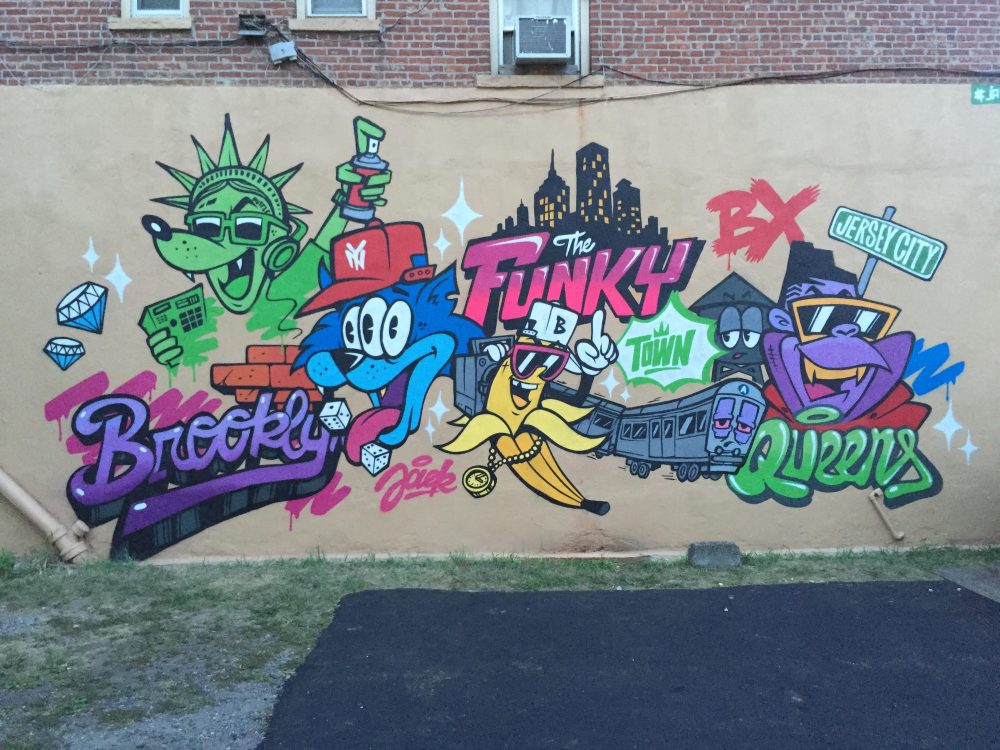