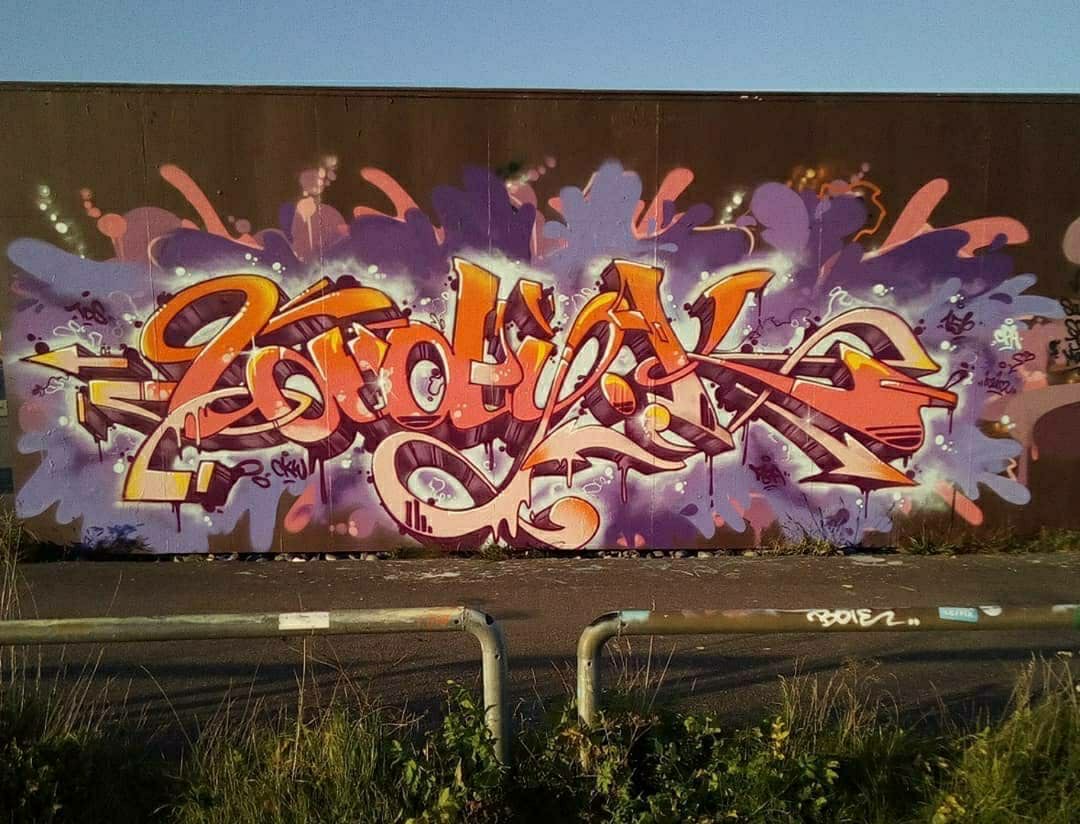 Bonjour, LADY K! It’s a pleasure to have you speak with us. Let’s begin with how you got into the grafﬁti game?

Hi, it’s nice to speak with you again. In 1991, a classmate came to class with a beautiful drawing handmade, pencil. The letters were handsome, I decided I wanted to do better. So I started drawing letters then tagging with markers and spray cans. In 1997/98, I did tags everywhere.

Did you always write LADY K?

No, I started Lady K in 1998. Before that I had other names one of them was CH20, it was an imaginary molecule made out of methane and water. Also, I wrote White. I read an interview of Futura 2000 he explained that he had that dream from the future so it became his name. I asked myself what was my dream. White came out pretty clear, it was purity. Around ’98 a movie about white power came out, posters everywhere, it stained my dream of white, it strangled it, the superﬁciality of the appearances. I changed my name immediately. White silenced a deeper dream than the babbles of some humans with no evolved brains.

What crews do you rep?

Did you study at an art school? Have you experimented with other kinds of art forms during your journey as a grafﬁti artist?

I got a diploma from the Fine Arts School in Paris, I also have a second year of a master’s degree in Creation and contemporary plasticity from the University Panthéon-Sorbonne. Since 1997/98 I’ve explored other forms of art like the classical branches of Surrealism and Dadaism. Especially when I did not want to read about writing at all. The last ten years. To get my artwork new codes and methods.

What are your inspirations and inﬂuences?

I appreciate Kandinsky for his theoretical framework, it gives value to his work. Leonardo da Vinci, his polymath side. André Breton’s manifesto. Revolutions in sciences by Planck, Einstein. Marie Curie’s 2 Nobel prizes. Maria Montessori‘s work. The neuroscientists who explain how the body works by observations and measurement tools. I think that our mainstream culture is not that knowledgeable. I try to escape from it by adding some science and consciousness to it. I believe the authorities don’t want people to think so they can keep an eye on us. So they pour out sex and violence to the culture to keep them satisﬁed. Creation is a biochemical process like any organic ones. Pierre Lemarquis in his book Portrait du cerveau en artiste wrote that we make those to regulate our behavior whether we are sad or not. What inspires or inﬂuences me makes me create serotonin and dopamine…like eating pho soup or pancakes and drinking tea with berries with a good friend after painting on a train line. Also, my son, is the most wonderful source of inspiration. His innocence and the way he looks to the future…I changed many things in my way of perceiving the world, in my paintings, and being able to conceive in parallel of writing another style of painting inspired by writing which can be even more centered around eudemonism and to preserve the planet for him and all of the other children who will become adults and will in turn have children who will perpetuate this pattern, I hope. I think love, tenderness, attachment, affection inspires me.

What do you like most about the Paris Grafﬁti scene?

When I was younger, Paris was all about 5 letters: WEANE. Nothing else interested me. Now that I’m older, I admire the works of Psyckoze, L’Atlas, JonOne, Guy from 156, but all of them are international writers not only held to the Paris grafﬁti scene.

I know you are also a big fan of the grafﬁti scene in Moscow and Berlin, can you explain what you like about the graff scene in those places?

Well, I think that if we would have to choose a place where it all begins, it’s in the states. Speciﬁcally NYC and Philly. The inﬂuence from the grafﬁti motherland is clearly visible in the writings of Paris which was the ﬁrst city in Europe to embrace the art form because of artists like Bando but the letters that are created in Germany is so beautiful. There are such good writers there like Focus, Skore79, Plaque, Phet, Dejoe, Amok, Rism, Scotty, Rast, Spade53, Skenar, Kest, Don Copsa, Dark, Honey, Unsin, MAD.C….the list is longer than that, I regret not giving you all the names. With Instagram, you know I discover writers, the letters struck me then I wanna interview the artist on the behalf of Paris Tonkar, 90% of the time, they’re from Germany. But I prefer the Russian letters, they are a mix that evokes the harshness of the climate and the sophistication of the culture (ballet, chess, classiﬁcation of periodic elements, ﬁrst woman in space, architecture inspired by the Renaissance, literature, Medovic….) Moscow is magical. You can’t summarize the city to writing only, the architecture is stunning. Between the buildings you have onion shaped domes, just like hard candy. The lights are enchanting. During the night it’s magical. The subway is the most beautiful around the world. Its countryside zigzagging the birches. Old buildings are taken care of, they paint them, it’s like Disneyland. In Paris they only clean them and that’s it. Zemra told me that it reminds her of a dollhouse. People living there following the seasons. The purplish blue skies. All of this you know it gives the writing environment in Moscow a magical touch. Walking through the snow, alongside the railway, people working or traveling, looking at the snow ﬂakes spinning. A one hour trip just to go paint a train with an orange sky you can’t explain it. Doing panels also. The grafﬁti scene in Russia is so fascinating and interesting, I wrote a book about this topic.

You’re also well known for day time bombing and tags during broad daylight in crowded streets so I have to ask, have you ever been in trouble with the law?

Yes, I’ve been busted 24 times, have had more than 7 lawsuits, slept in jail cells and police stations many days and nights, and have gotten numerous one hundred day-bills (when we don’t pay we go to jail). Now that I am a mother, I’m doing my best to be careful.

Last summer, sometimes you would tag the name “Plato” in the streets of Paris. What was the reason behind that?

We had a discussion with Psyckoze, we concluded that people liked more asses than books, our Instagram accounts reﬂect that a lot so I decided to use Plato, Hegel, and others too. I am keen on their philosophy, our hierarchical system is based on it you know. I tried to make it clear to people too. If I had to reveal a dream more than a reality, I would write Epicurus because happiness is the center of the world to him.

What is your favorite documentary and/or book that covers the history or major players of grafﬁti and why?

I don’t have a favorite book or documentary. It’s really awkward for a writer, I admit it. But the history of the writing is not my favorite subject. I can study it but I am not a specialist. Well, if I had to choose then I would select Bernard Fontaine’s book, Discover the grafﬁti. Also, the grafﬁti documentary Girl Power by Sany.

I’m aware that this may be a somewhat difﬁcult question but what is your vision of grafﬁti? In your opinion, how should it be viewed?

Huge subject! To me there are different kinds of writings with different states of minds. You have cool people cooking BBQ on a Sunday afternoon painting outside, people armed in the yards, people who steal the sprays from others … to summarize I would say that writing is the artistic consequence of the drifts of capitalism. I also think it is important to have those disturbing writings in a sleeping city in its cofﬁn which turns itself into a reef where boats smash. That’s what writing is to me. You know, one day I was walking near the Austerlitz metro station, everything was so beautiful, the Haussmann architecture, the summer like breeze. And all of a sudden the subway was here, painted, it reminded me everything that was not going so well in my city, the poverty, unemployment, people sleeping outside, war, violences…if the walls were silent what would be interesting to reveal, nothing. We are humans not slaves of the power. We always want more democracy and it’s totally normal.

What is the message that you hope people will get from seeing your work?

It’s really up to what I wrote, the colors I used, people don’t understand, they don’t have the keys to do so. I think we re-humanize the city. We put humans ﬁrst and not the economy.

Is there any advice you can share with a young person who wants to get into grafﬁti but doesn’t know how to begin?

First step is to exercise on paper, practice a lot and probably surpass yourself, be the best like high level athletes.

Of all the women I have met my fav are: Moesha, Justine, Marguerite Stern…Zemra, Shupa, Sista, Jolee, Chika, Honey, Alise, Adel, Sol, Nina, Unsine, Magic, Sany, Nelly, Kenza, Utah, Aussi…those I had no chance to meet personally and to those I just bump into but I don’t want to make a list. If I make a list of people, even if I favored women, this list cannot be complete without my son, my family, and my male friends especially Psyckoze, he’s like a girl, I can speak with him about many things and is the only boy in my female crew CKW!!!! And my friend with whom I tasted borscht for the ﬁrst and only time. Merci à Sarah Gozzi pour la traduction. A bientôt! 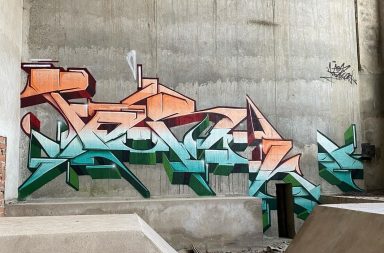 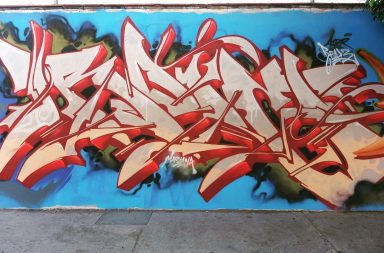 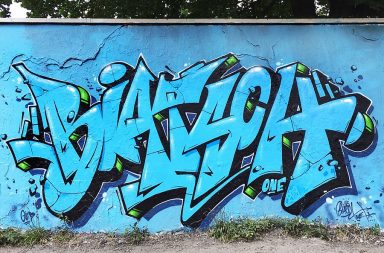