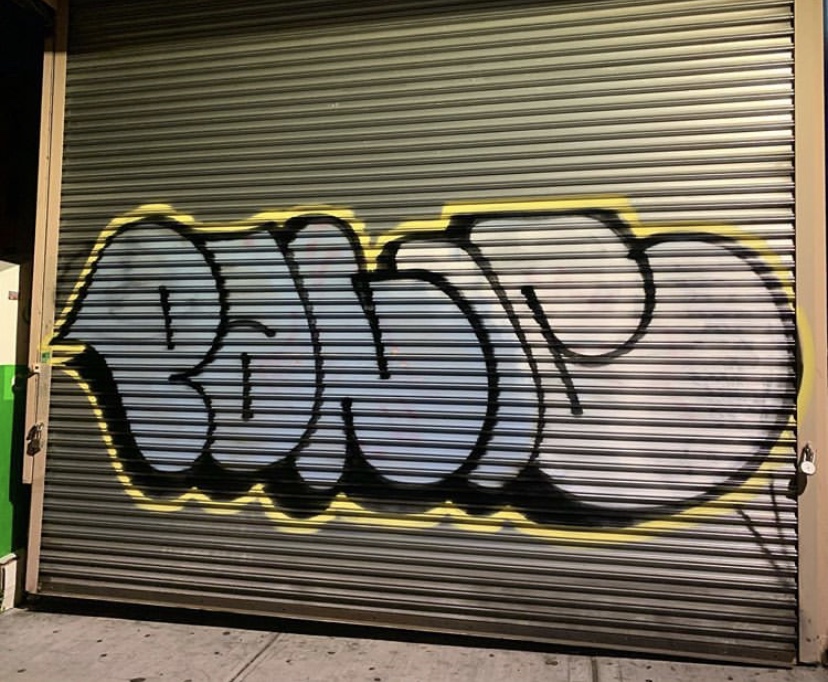 How old were you when you first started to notice/ get into graffiti?

I noticed it when I was around 9-10 years old, but I had no idea what it was at that age. I was just curious why the walls were all scribbled up. Then one day as I’m walking down the street with my mom we notice two people with binoculars (undercover cops) looking toward a wall off the sidewalk onto the highway. It was people doing graffiti. So I ask my mom “What are those kids doing?” She just tells me that what they were doing is bad. I was completely fascinated by it and got into graffiti later on at the age of 13.

Who was getting up at that time?

Definitely BRUZ & NATO since they had a bunch 7 line roofs that were always huge and legible. I couldn’t really read anything else; I just remember the shapes. Looking out the window as a kid gave me a dope feeling of excitement & curiosity as to why there was art on top of all of these buildings.

What were some of the first names you started working with?

How/ When did you get your name?

I got my tag from my sister. She was into graff too and at the time I didn’t know a single person that I could bomb with, but her. One day she watched the Disney movie Hercules that had these two little gremlins named Panic & Pain in it. She tells me that I should write Panic and she should write Pain. The rest is history.

What writers would you say have influenced your style the most?

VEONE, GIZ MTA, SLASH FTR, and KORN to sum it up. I always fucked with that bubbly style with some sharp jagged areas in it. PAINE TRU from Queens had a dope script hand style that I always dug so I picked that up over the years. I’m a self taught writer so the rest was just taking bits and pieces from other people’s styles and creating something I thought looked good.

When did you develop your notorious two letter throw-up staple?

I want to say around 2008. I started out doing my entire tag as a throw, but then I shortened it up. I always wanted to create an iconic two letter throw that’s like a stamp. It didn’t look shit like it does now, but I always had a vision of how I wanted it to look mentally.

Where else besides New York have you had the opportunity to paint? And what was the scene like?

I’ve painted México city. The graff scene is poppin’ over there. Graff everywhere. I got bagged by cops my first night and I just paid them off with like $15. No one beefs or rags each other either so it’s kinda different then NYC for sure.

What’s a night you can recall where the mission didn’t go as planned and things started to get a little wild?

I was in the south Bronx a couple of years ago plotting on this sexy ass box truck. SEO is on the corner looking out and gives me the ok. So I start shaking my cans getting ready to rock. Right when I do a lil test spray the truck door flies open and a big Puerto Rican looking dude hops out with a baseball bat.  He starts screaming at me asking if I was the one that kept tagging his truck up. I start cursing him out so he swings it at my face and misses me by like an inch. At one point were both struggling to get a hold of the bat when he kicks me in the stomach and I fall to the ground. Right when he’s about to swing it at me SEO pops out of nowhere and punches him right in the jaw laying him out cold. We ran for like 10 blocks, copped forty ounce beers and kept painting.

What spots have you painted that you may have risked your life hitting?

Mexico City. I was hitting this spot on the side of a mountain about 100ft up with a two-foot dirt ledge. The ground kept crumbling under my feet and I was getting dizzy from inhaling so much paint. I could’ve easily lost my balance and fallen down the cliff.

Whether you’re rocking solo or with a few heads, what’s your favorite type of spot to hit?

Store gates for sure. Especially ones on a busy corner that are hard to pull off. The hotter the better. I love the rush of hearing cars fly by me from all angles honking n’ shit. Box trucks too because they’re like modern day trains. They get around all over the city.

How has being a writer impacted your life?

I’ve met some of my best friends through graffiti and we’ve made memories that could never be replaced. It’s made me more aware of my surroundings and peoples intentions. Bombing and seeing my name up keeps me happy. But other than that there’s nothing positive about writing graffiti or the people in this game. So if you’re thinking about picking up a can, do yourself a favor and just spray yourself in the eyes.

What’s your opinion on social media (any platform) and graffiti?

It’s good and bad. It’s good because you’re exposed to graff from all around the world instantly. Instagram can be whack as fuck. It’s a drama filled soap opera with inflated egos. Any kid now can pick up a spray can, catch a spot in his backyard or in a bando, upload pics online, and then boom he’s a “graff writer.” But you’ll never see their shit in the streets.

What keeps you motivated to keep painting?

My crew, seeing other writers destroy shit. Finding new spots I want to hit is exciting. I’ll have a list of spots I want by the end of the week and it’ll bother me like an itch you can’t scratch. We’re not the only writers out there plotting on spots. So if we don’t hit them, some other crew will.

How often do you try to paint?

When I first started painting hard years ago I’d go out about six to seven times a week. I’d even paint the same night after getting released from central bookings. Nowadays About three to five times a week. It ain’t crazy, but at the end of the day like a famous writer once said, “There is no finish line.” I try and stay consistent and paint as much as I can every time I’m out.

Have you noticed a difference in activity in the streets as far as painting due to the Corona Virus (Covid-19?)

100%. Vandalism has gone up crazy since Covid-19 hit. Lots of writers out the woodwork. It’s the perfect storm for it to spread. There’s barely any cops or pedestrians out. And if you do see them they ain’t tryna chase or arrest you in fear of getting infected. Wearing a mask and gloves isn’t suspicious in these times.

What’s the most monumental piece you’ve ever painted?

I could care less. That’s a good way to get attention from the wrong people.

How did you cross paths with you notorious bombing partner SEO?

We met through other mutual friends. We spoke one night after painting and realized we had the same vision of how we wanted to destroy the city strategically and what we wanted our graffiti to look like. We didn’t want to be the next one hit wonders.

How long have you been down with SB for?

I been Staying Busy for about 14 years now.

Is there anyone you want to give a shout out to?