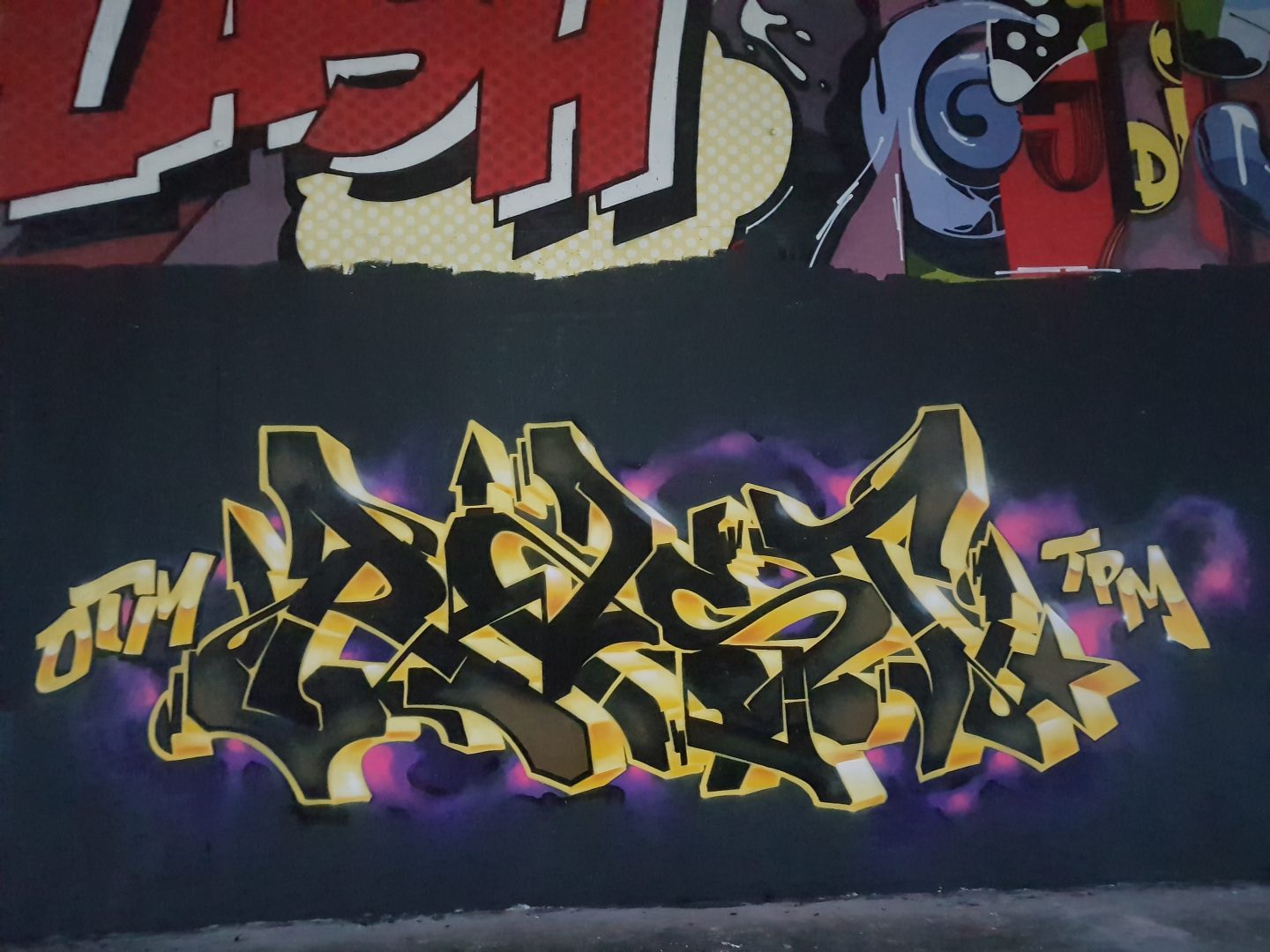 Long ago as a kid, I wondered the streets of Heidelberg, Germany and saw some guys who looked like writers so I asked them in English if they wrote. I hoped they would understand me, and you know what they were so cool to me. Here’s some young kid from the States, eager to experience German graffiti and as it turned out, it was the infamous TPM crew, Kane & Scotty 76 I was talking to. Later that day, I saw TPM on subways & track sides and all over the city streets. I even walked onto the subway line in the daytime with 2 girls just to take photos of the trackside pieces TPM had. A train stopped, the conductor hopped out and yelled at us in German and we ran. So when I
stumbled upon Rast’s IG and retold this story to him, it made my day.
-Jehu OSD

When did you start writing and who were your influences?

I started drawing early as a kid. That was mostly stuff like comic strips, influenced by Cartoons. Saber Rider and the Star Sheriffs or Marshall Bravestar were the shit back then for 10-year-olds…By becoming a Teenager I saw all the girls running after the athletic boys and I was the weird guy sitting in the back of the class, drawing. Finally in 1996, when I was 14 it came all together. I was drawing and I was into Rap but didn’t know anything about Hip Hop. One of my classmates told me, he met some guys who were much older and they were doing Graffiti. Suddenly, it all made sense to me. The guys, my friend knew back then were REAL, RAKE, BASCO, BEAST and some others from Mannheim. They taught us the real meaning of Hip Hop and the rules of Graffiti. Mannheim is very close to Heidelberg… geographically and style-wise. Back then, every bigger city had it’s special letter styles. Stuttgart, where I come from was doing the typical Basel style in the ’90s. Mannheim and Heidelberg were much closer to the New York phunk style… I was influenced so much by TPM, SAA, ROE, and NCS. For me and a lot of people, it was the essence of style writing. To me, TPM was always top-notch! The Phunk Masters! What a great team. King KANE, the founder Scotty 76, truly a Graff and BBoy Legend, Peso and Time.

“It is so special, to be a part of that team. Not everybody can be in. You got
to have style.”

Kane is a mastermind of style and pioneer of German Hip Hop, long before other cities started. Scotty 76 lived in Stuttgart since the mid-’90s and worked in a Shop for Streetwear. We always came there and showed him our sketches. He was never rude or snobbish. Always encouraging and living each 1 teach 1. So I got influenced by them and of course New York Oldschool. Dondi, Kase2, and the Stylewars movie of course. Also, Berlin had an Influence on me, because I spent a lot of time there. ODEM, AMOK, SHEK, FOK were some of my role models in Style. The day, I was asked to write TPM was almost as important to me as my wedding. No kidding. It was like becoming a Knight of the round table, you know, graffiti saved my life.

Years later, seeing “The Phunk Mobb” on trains & streets in European graf mags, bro that got me so hyped up because I remembered meeting you guys. Tell me about TPM’s history & when was it formed?

TPM was found in 1983 by KANE a.k.a. Gee1 in Heidelberg. I was 2 back then, but I was told a lot of stuff. So Kane moved to Heidelberg from the UK and he already has known about Hip Hop, when there was no single tag in Heidelberg. He developed a unique phunk style and formed “The Phunk Masters”. One of Germany’s oldest crews. Maybe even the oldest with the original cast, still active. TPM seems quite organized, share a little insight about the crew dynamic. How is it ran, etc. The TPM crew consists of about 30 members who are always in touch. Although the individual characters are so different we are brothers in arms. We have a hierarchical structure, based on respect. Every member is an individual and free to develop but we feedback each other a lot, which is good, to get forward. We really put letter science before innovation. KANE is the founder and has the last word. SPADE53 was put in charge by him, so he worked a lot on the build-up of the team.

We do a big meeting at least once a year with all, the original 4 as well as the 3rd gen, I belong to. Thanks to Spade, we have 3 members in Asia today. In Beijing, it is ANDC and SMER and ARES in Bangkok. I see so many crews, that have big names and they have 100’s of members all over the globe. They don’t even know who is in, themselves. They pick people who do completely different stuff, only because they have 50k followers on IG. Like a company out for public relations…It is not the same feeling. It is so special, to be a part of that team. Not everybody can be in. You got to have style. So being in TPM for me is like a lifegoal. I definitely agree with you about crew dynamics. What made you choose this medium of creative vandalism over doing something else? I think it was the mix of drawing and adventure. Feeling like a superhero, surprising society every morning. As a teenager, I always felt like a misfit. I couldn’t find my place really… all the rules made me feel suppressed, so graffiti was my way to break out. It
wasn’t about the destruction, it was more, that I tried to make my surroundings fit me.

“It’s nice to paint ugly war architecture with colorful pieces, while your girl isn’t complaining, ‘cuz she’s at the beach with you.”

You have painted all over Europe & the States, what has been your favorite cities and why?

I think every city has it’s charm. Of course, NYC is very special to every writer. Painting at the 5 Pointz to me was like living in a dream. I visit NY a lot because I have family there. Beside my Aunt, I am talking about people like BOWZ and MERES, who are like brothers to me. Also cities like San Francisco, Berlin, Madrid or Istanbul I painted. Istanbul was very special and really cool. One of my favorite spots was the Atlantic coast of France, where you can paint bunkers from World War 2 right on the beach. It’s
nice to paint ugly war architecture with colorful pieces, while your girl isn’t complaining, cuz she’s at the beach with you.

What city/ region of the world made the biggest impact on graffiti? Obviously New York City is the mecca, the beginning for the most part, but what other cities really got your attention and why?

Besides NY it was Mannheim and Heidelberg. Those cities are the origin of my style. Berlin for its massive amount of writers, it’s urban structure full of history and tunnels, bunkers, layers of cityscapes above each other. Style, as well as pure bombing, is comparable to nothing else. I like Paris for the same reason in a different way, if you know what I mean. Same but different.

“I see painted subway trains every day. Even after all these years. Here on the Autobahn, pieces can stay for years and even decades”

Of course, Stuttgart, my hometown, made the biggest impact on me personally, because it is where I made all my experiences, made friends, lost them and developed myself.

In Berlin & Heidelberg, I remember seeing city streets just absolutely crushed & trains running with pieces. For those who don’t know, describe the German graffiti vibe and specifically your town.

In Germany, Graffiti is huuuuuuge. I think it was one of the first countries in the world that started Hip Hop. Maybe it was because of the American GI’s stationed in Germany. Nowadays Graffiti is everywhere and I see painted subway trains every day. Even after all these years… Also the Autobahn. In the states, they buff highway pieces pretty fast. Here on the Autobahn, pieces can stay for years and even decades. People show respect. I got illegal pieces on bridges that are over 20 years old. In the cities, we have a lot of officially legal spots, so come visit.
That is so sick.

What is a typical day in the life of Rast?

I am a social worker and work as a kind of youth counselor. I can use graffiti to teach young wannabe gangsters the value of creative art. That was the aspect that helped me a lot. To learn that respect doesn’t mean that people fear you.

Very cool that you are contributing to society in such a positive way! It’s sick to see your affiliation with Snowgoons, my people in Copenhagen (Shak) are down with them as well. Tell me about that association?

Snowgoons are reppin’ the real underground Hip Hop, as I try to do. My Brother DJ CRYPT from Snowgoons lives just 2 blocks away and we met some years ago in Stuttgart’s nightlife. He really became a very good friend. Also DJ ILLEGAL and DET GUNNER I know in person and we collaborate a Lil… Why? I think Snowgoons do kind of acoustically Phunk style as well as TPM does visual Boom Bap.

How can people see more of your work?

The most stuff you see by checking my Instagram @phunkmaster_rast, In the end, I want to say a special thanks to you to some people who helped me so much on my way: SPADE 53, SCOTTY76, MERES and BOWZ. Of course, love goes out to all my crewmembers from TPM, OTM, and ROT. Don’t stop.

Thanks to Street Love Magazine for the additional photos. To see more of Rast’s
work:
@phunkmaster_rast 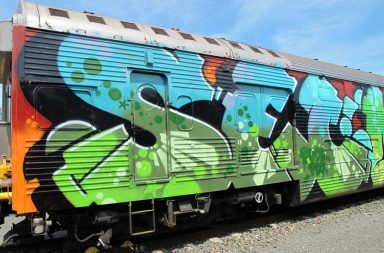 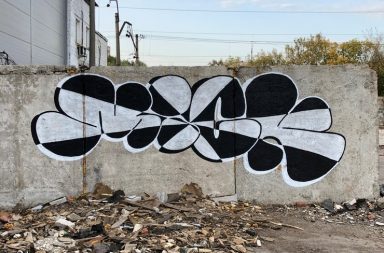 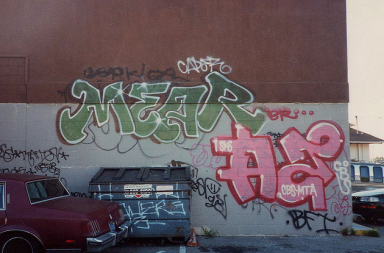