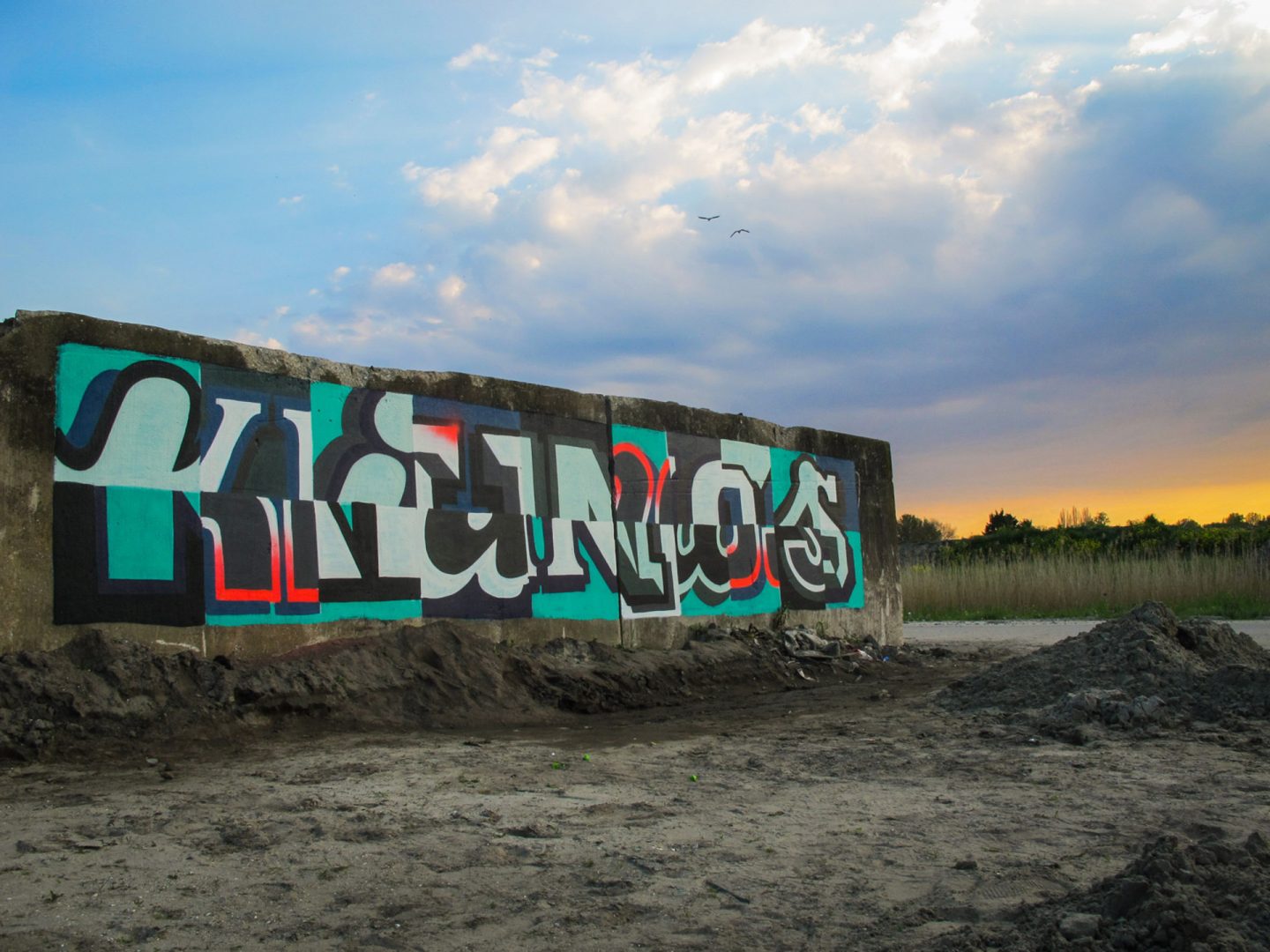 Said Kinos is a prolific artist based out of Rotterdam, The Netherlands and his murals struck a chord with me on something I think we can all relate to: the never ending noise and over stimulation of advertising, technology and media in our culture today. I had a chance to sit down with Said Kinos below and talk about his inspirations and where he sees his art going from here. 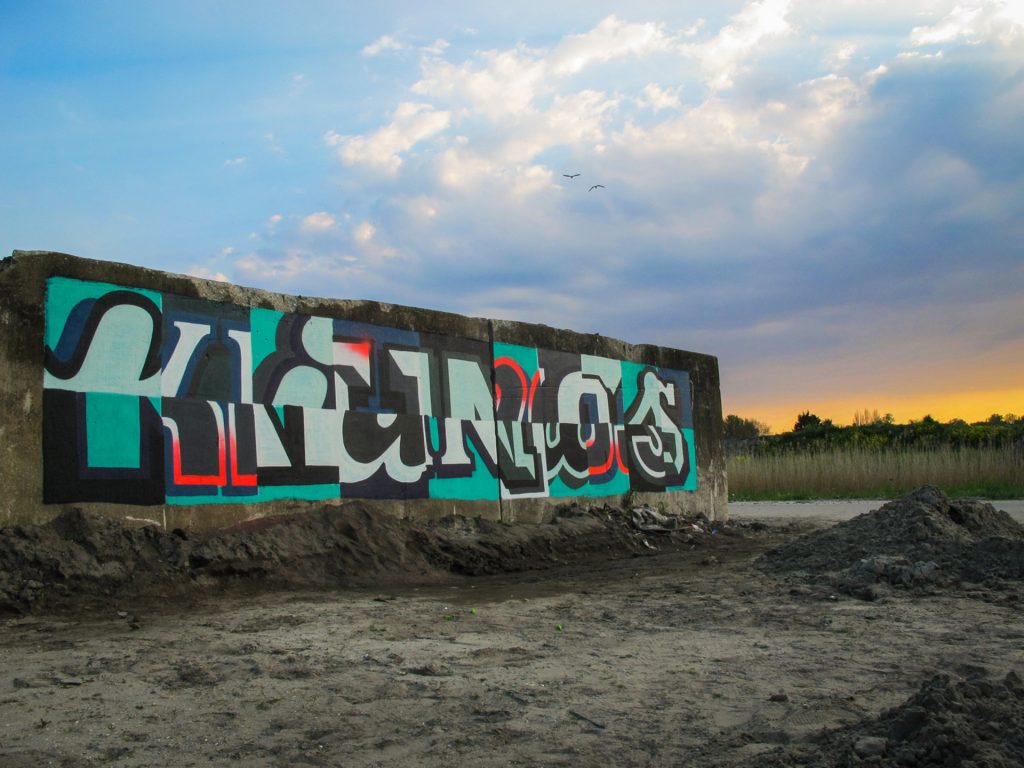 1) In your previous losbangeles.com interview you mentioned that originally you went into school for journalism, and I’m curious to know how journalism training has affected your art. Is art just another form of journalism to you?

I don’t really see art as a form of journalism. I think the parallel between the two is curiosity. Both ﬁelds require a certain amount of it. I wanted to be a journalist at the time because I was curious about the world and what was happening in it. I wanted to travel (and still do) and write about it. Artists, designers and journalists can cover whatever subject matter they ﬁnd interesting or worth exploring. If you have any other ‘regular’ job you’re kind of conﬁned to your ﬁeld of work. Maybe that’s why I gravitated towards collage and abstract work after a while. When you work ﬁguratively, you also have to pick one subject and work from there. I can take reference from where ever I want and incorporate it into my work. 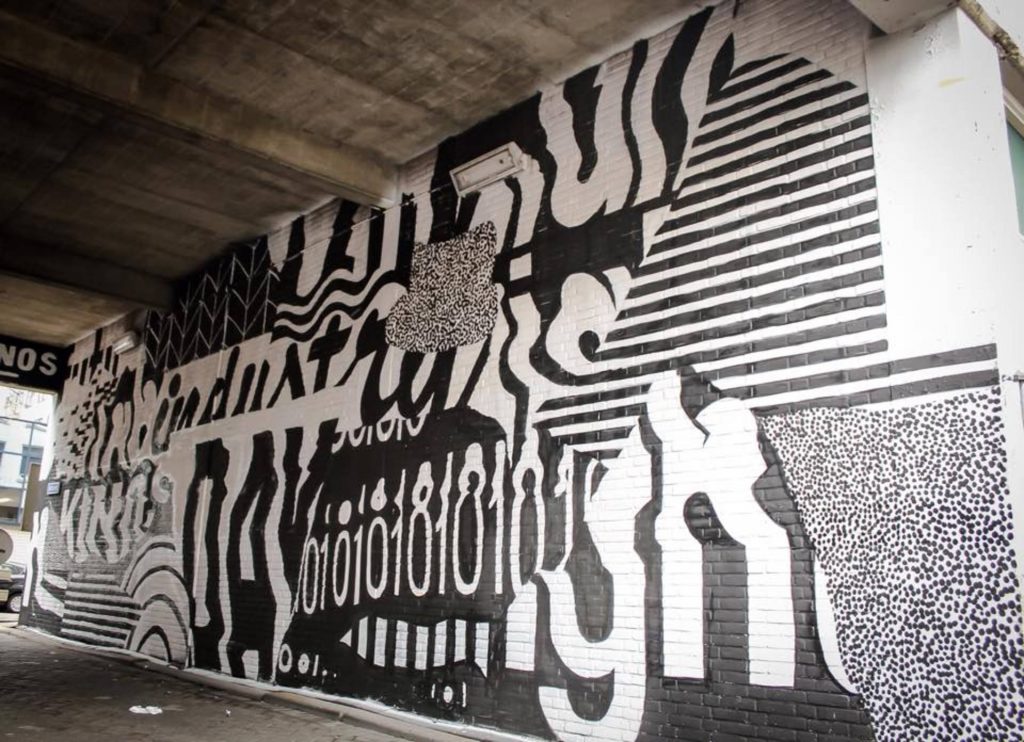 2) In one of your murals I see a lot of overlapping text along with what looks like to me computer algorithms. It reminds me a lot of the over saturation of advertisement in media today, is this what you would consider your message is in your art? What do you hope people will take from your work?

Yeah I think that’s a pretty accurate assessment. All my work starts off as a collage. All little bits say something individually, but all put together they become meaningless, abstract and kind of merge into a big composition that doesn’t really mean anything. I think it’s the same with ‘content’ nowadays. If I spend a day online, or even on the street for that matter, I will take in a huge amount of information, but almost none of it sticks. I mean how much content from your FB feed from today do you actually remember? Or was actually worth reading? One article? Maybe two posts? I also have a thing for places where you can see the real life version of this. Places where advertising and posters start to decay and layering starts to reveal itself. It’s a beautiful thing, while it’s the exact opposite of the function it had when it was made/designed by someone. I do feel like I have been exploring this subject for a while now and I’m looking for new things to gradually move towards. Maybe it’ll be aesthetically, maybe it’ll be conceptually, I don’t know yet. 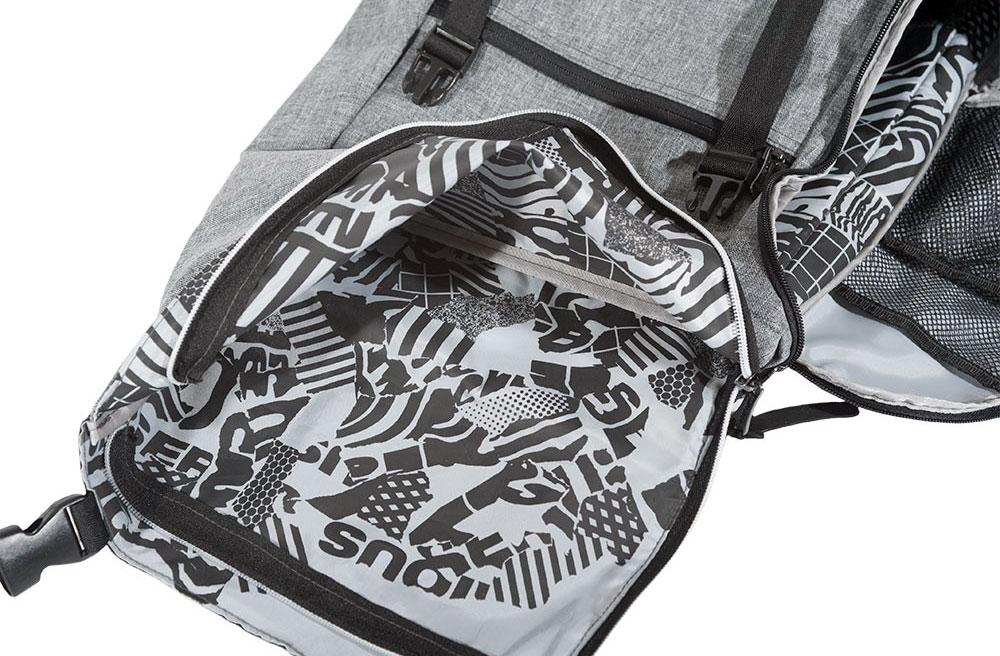 3) You have started designing a series of backpacks with Mr. Serious. Where did the idea for this come from and how does this ﬁt into what you want to do as an artist? How much involvement did you have in the overall design?

I’ve been friends with Mr. Serious for a while now and we had been talking about it. So at the beginning of this year he contacted me about it and I obviously I want to do it. Mr. S. made the design for the outside and asked me to make a design for an inside print. This way the outside looks super casual and kinda classy and the inside looks like visual mayhem of sorts haha. I was given total freedom and he wanted something that was recognizable for my style. That’s the ultimate commission as an artist really.

4) You mentioned previously that you are reading through the book Fingerprints of the Gods by Graham Hancock, is there anything in that book that has inspired your personal work? How has  podcasts like the Joe Rogan Experience or Duncan Trussell Family Hour inspired your work, if at all?

I think it all comes back to curiosity again. I’ve got such a broad spectrum of things that interest me and I ﬁnd fascinating that I just want to keep learning about them. Also having gone to art school and not getting a ‘regular’ education, I kind of feel like I’m missing certain knowledge.. Not that I actually wanted to have gone to a regular university or something, but I guess reading and listening to podcasts is kind of my way of educating myself. Einstein said that “Once you stop learning, you start dying” So hopefully I’ll keep learning for a while haha

5) What does your name mean?

Nothing really. I used to write Sonik, but once I learned that there was a Sonik in Paris that was signiﬁcantly better than I was, I decided to ﬂip it. 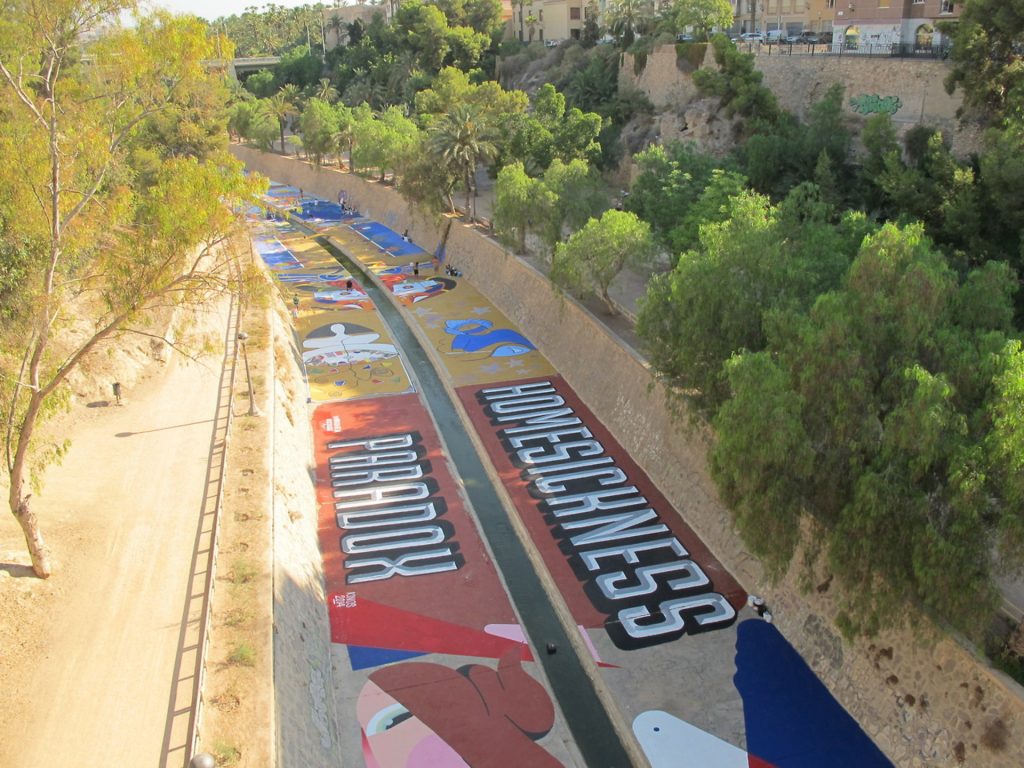 6) How did you learn how to design? Do you follow a thumbnail process?

I went to art school and studied Graphic design. There’s no speciﬁc process for the design work really. It starts with an idea. And usually it stays in my head way too long up until the point that it’s driving me insane. Then I do a quick sketch and that stays in marinating in my head again. For my studio work /collages I usually just start making stuff. The process informs the outcome. It’s a very instinctive process. Whereas the execution/last stage of the work usually is painstakingly precise. With my graff I used to never sketch. I try to sketch more these days. Almost make it a daily practice. Just to keep it going. I ﬁnd that from starting to sketch one thing/piece almost instantly another idea comes out of it. This way you could keep going forever. Maybe people have been sketching all this time for a reason.. hmmmm 😉

7) Who are your biggest artistic inspirations? How does writing about your inspirations on your blog help you grow as an artist?

Man there are so many. And constantly changing as well. It varies from contemporary artists like Frank Stella and Ellsworth Kelly to more classic artists like Escher or Dalí. But also graphic designers like David Carson and Alex Trochut or younger artists like Parra, Kelsey Brookes and Sam Friedman really inspire me. I recently discovered the work of Dominique Petrin which is fucking amazing. Same goes for the work of Robert Beatty. I also love to see proliﬁc grafﬁti writers turn in to ‘serious’ (whatever that means) artists. People like Pose, Revok were really pushing the envelope when it came to grafﬁti, but also seeing them succeed as contemporary artists really inspires me. In grafﬁti it’s usually the people who redeﬁne what grafﬁti looks like that I ﬁnd the most inspiring. Maybe thats why I try to look outside of grafﬁti for inspiration most of the time.

8) In the meantime while you work on your art, how do you support yourself and maintain a balanced life?

I do graphic design work for money basically. And try to make as much studio work as possible. And ﬁnd time to paint every now and then haha. Yeah its hard to balance it all out sometimes, but I deﬁnitely cant complain. I’ve been a terrible planner my whole life, so that deﬁnitely doesn’t help, but after 28 years im getting the hang of it, I think…. As far as maintaining a balanced life goes, I don’t think I have one at the moment haha. And if I do it’s because my ﬁancé forces me to take a day off every once in a while. I try to meditate to keep my thoughts straight (sort of) 9) To you, what is the role of the grafﬁti artist in society? What draws you to make public art rather than just art for galleries? Thats an interesting question. I feel like personally I have surpassed the point of making grafﬁti to ‘rebel against the system’ or something like that. Even though I do feel like that way of thinking is what drove me to grafﬁti in the ﬁrst place.

At this point in my life I see my own grafﬁti as just another form of self expression. But grafﬁti in general does still carry that rebellious feel with it. Seeing grafﬁti in the street and on trains proves that there are still people willing to go to ‘extreme’ lengths to paint and it proves that there’s still rebelling going on. Picture a city without grafﬁti. It almost immediately brings forth this image of a sterile, Orwellian city (in my mind at least). In that sense, grafﬁti almost proves that a city is alive and all segments of society are represented in a way. Making public art rather than making art for just galleries wasn’t really a conscious choice. I started out doing grafﬁti, so that’s what I did.. making art outside. Making art inside came after. I do feel like public art is the least pretentious and most accessible for the spectator. You don’t need a museum card or money to enjoy it. And I kind of like that. That being said, making public art often isn’t the most lucrative as an artist, so dabbling in the gallery segment of the art world makes up for that I guess. I’m not too experienced in that particular segment, but I hope to be in the future. 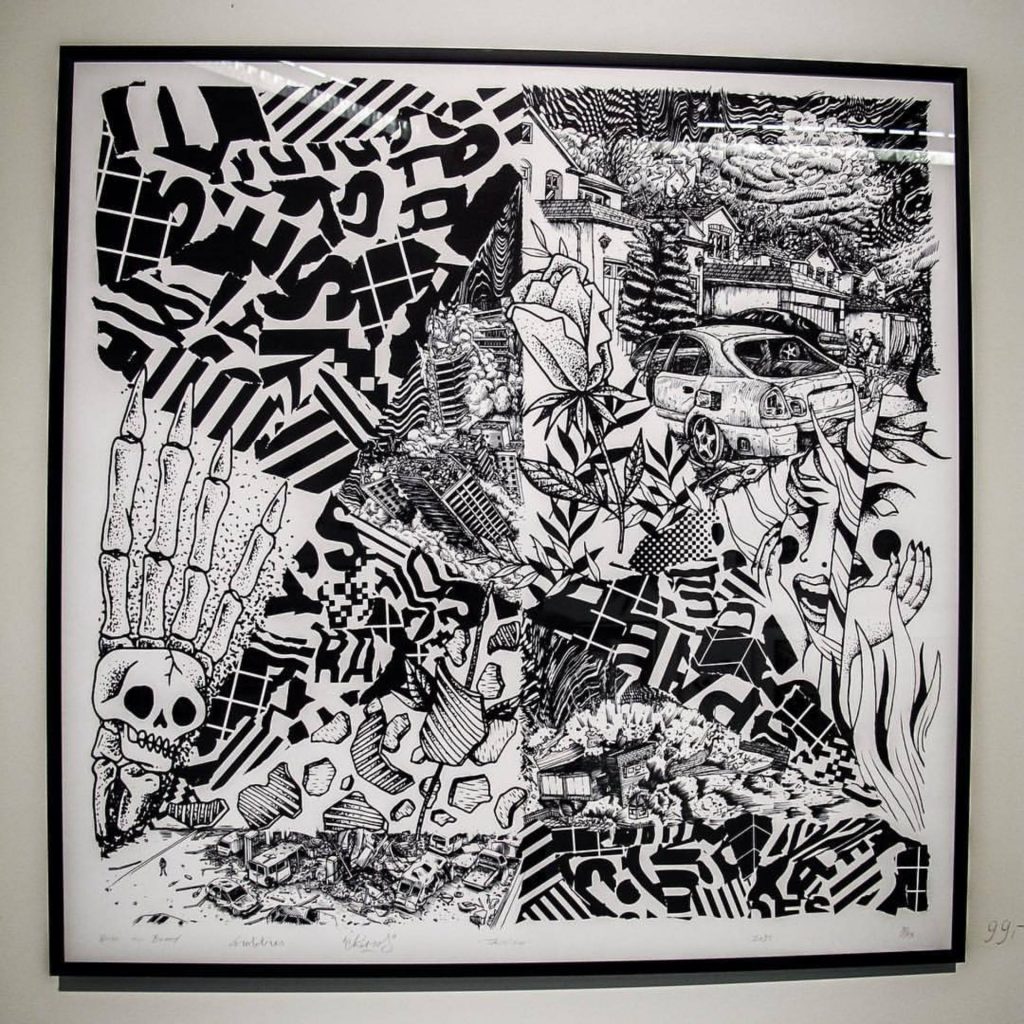 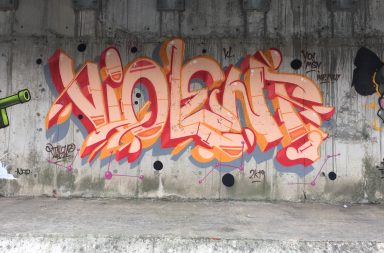 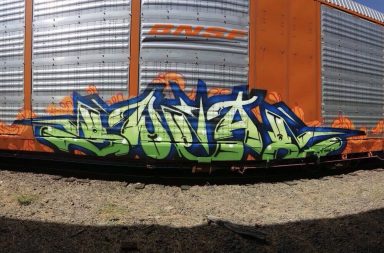 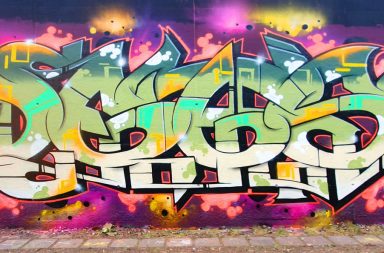