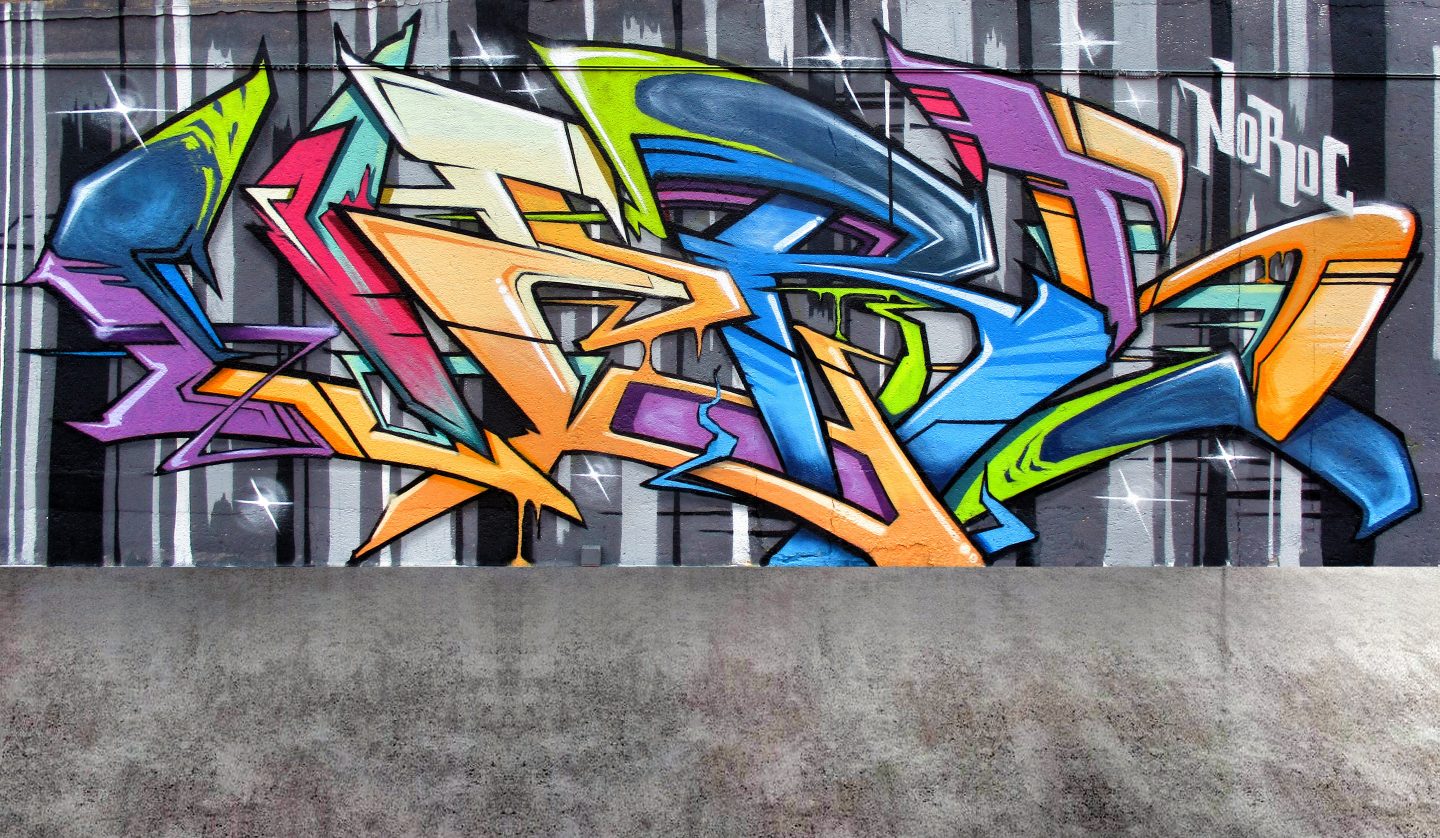 Hello. Before we get started, I appreciate the respect and I am honored to be taking part in this interview with Bombing Science.

I write VERS aka VERS 718. I’m born in and based out of Brooklyn, NY. I started writing around 1985-86 if you would even call it writing; catching nonsense marker tags on schoolyard handball courts, neighborhood poles, typical toy material. By 1988-89 I was hitting the streets and highways; early 90s is when I began painting pieces. 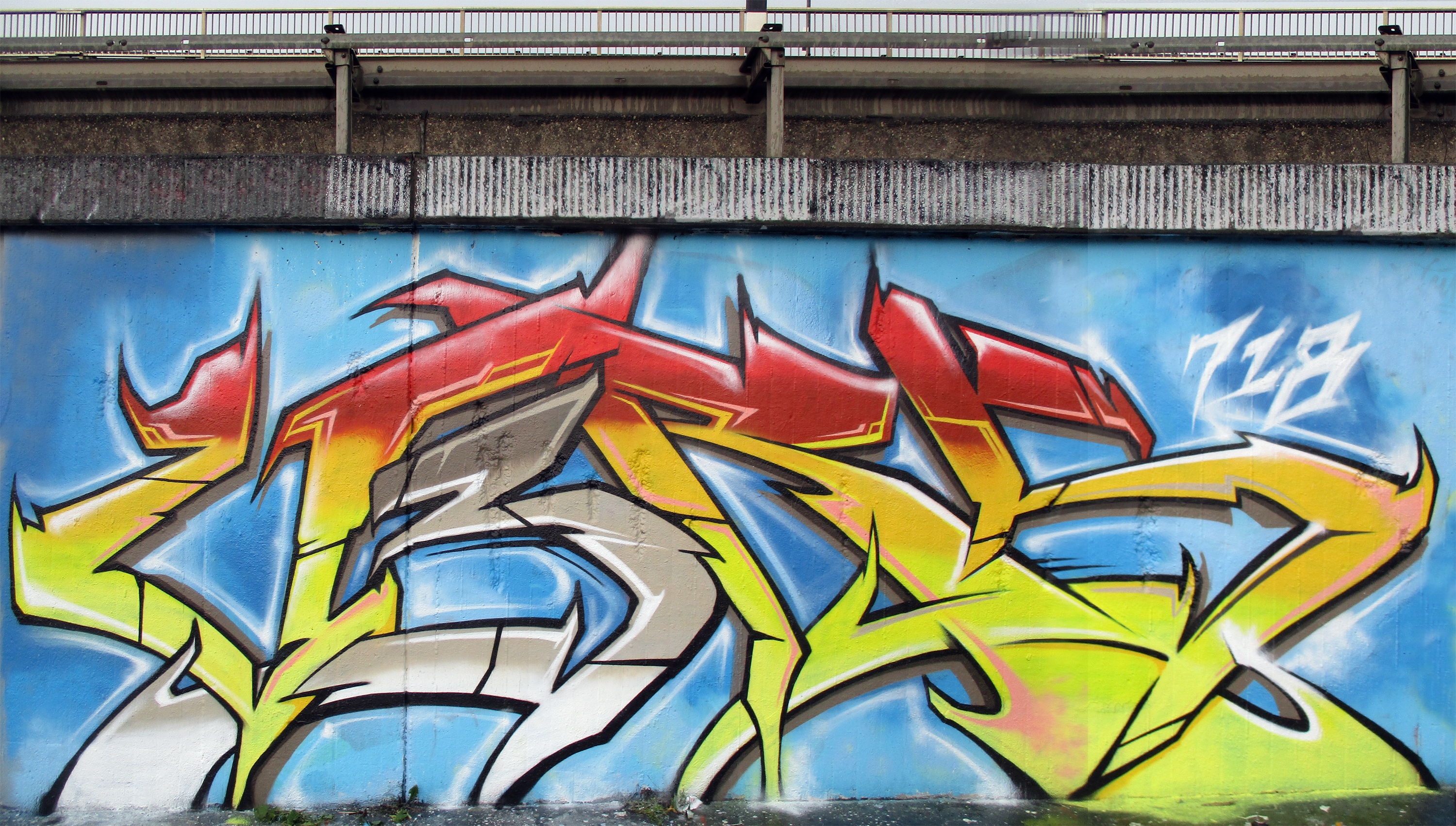 How did you land your first gig doing mural work? What did you bring to show as a portfolio? I don’t imagine you can walk around with a portfolio of illegal work.

The first legal mural that comes to mind was for a good friend – Jay – who lived on my block at the time. Jay was opening a slot car racing place and needed some graphics for his walls and a logo. It was a fun project and I got paid for doing what I loved. At the end of the project I remember Jay handing me a beer and saying “cheers”. It was a proud moment … and a cool moment since I wasn’t of legal drinking age. 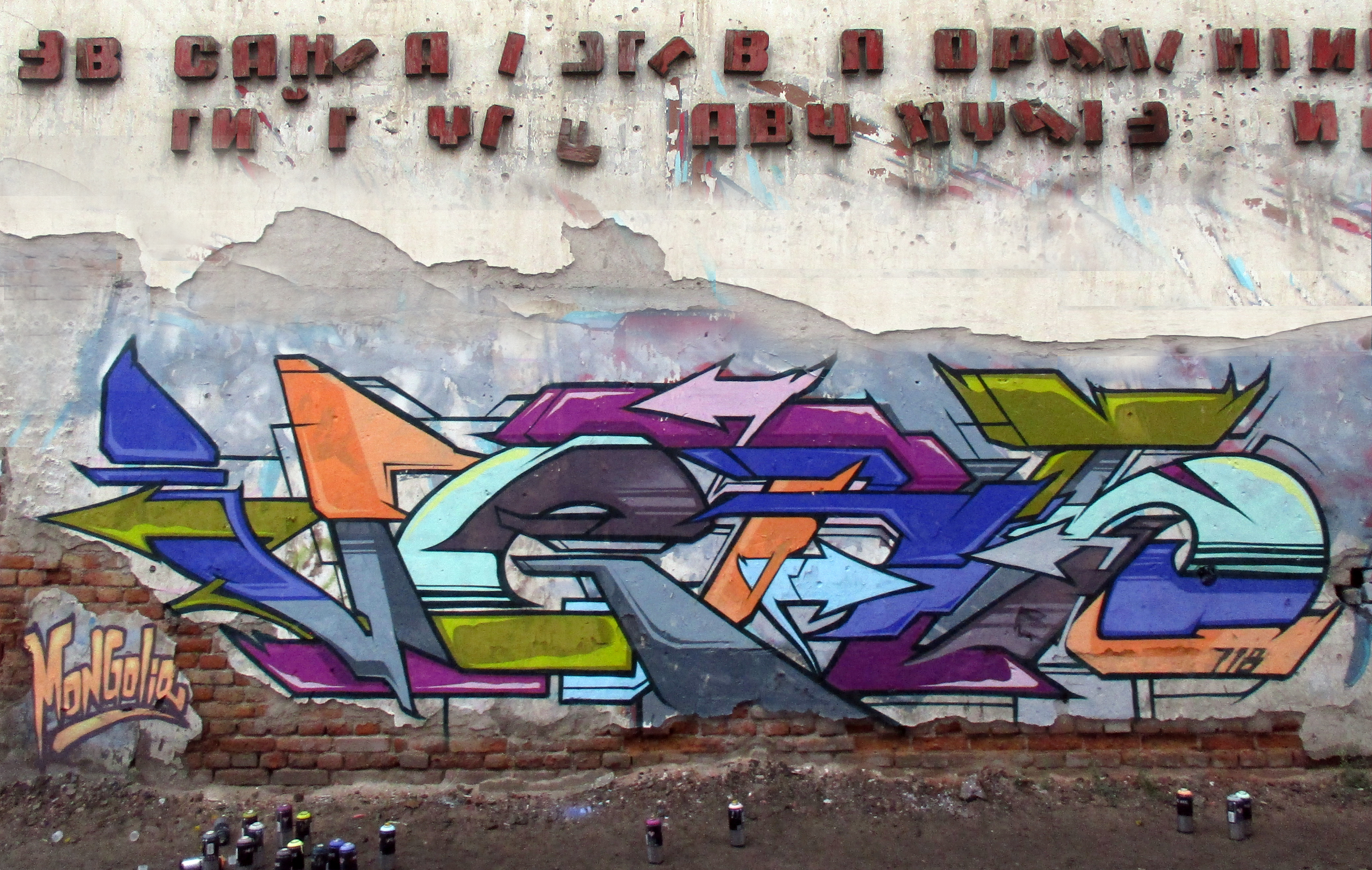 I see you are an artist that is expanding out of the street scene and into the gallery scene by doing these awesome canvas paintings that you’ve put on Instagram. I’m curious to know what inspired you to want to try different avenues for your art? What do you think of the debate about graffiti in art galleries vs on the street? How significant has this changed your business?

I appreciate the kind words. I’ve always like to try different avenues with my art; even with my graffiti pieces I mix up styles, layouts, themes. I get bored of doing repetitive work.

Canvas work brings a different kind of release to my creativity as I’m locked away in the studio coming up with new, inspiring works and experimenting in solitude for several hours, days… I appreciate canvas pieces as they are a permanent form of art that can move through and enjoyed in different environments from galleries to residences or offices. I’m all for graffiti in art galleries. I know some writers will say that graffiti belongs in the streets and that putting work in art galleries is selling out, but those are the same guys that come Monday morning are back to their 9-5 punching a time clock … For me – as a full time artist- canvas pieces and gallery shows have opened up more avenues of growth both professionally and personally. 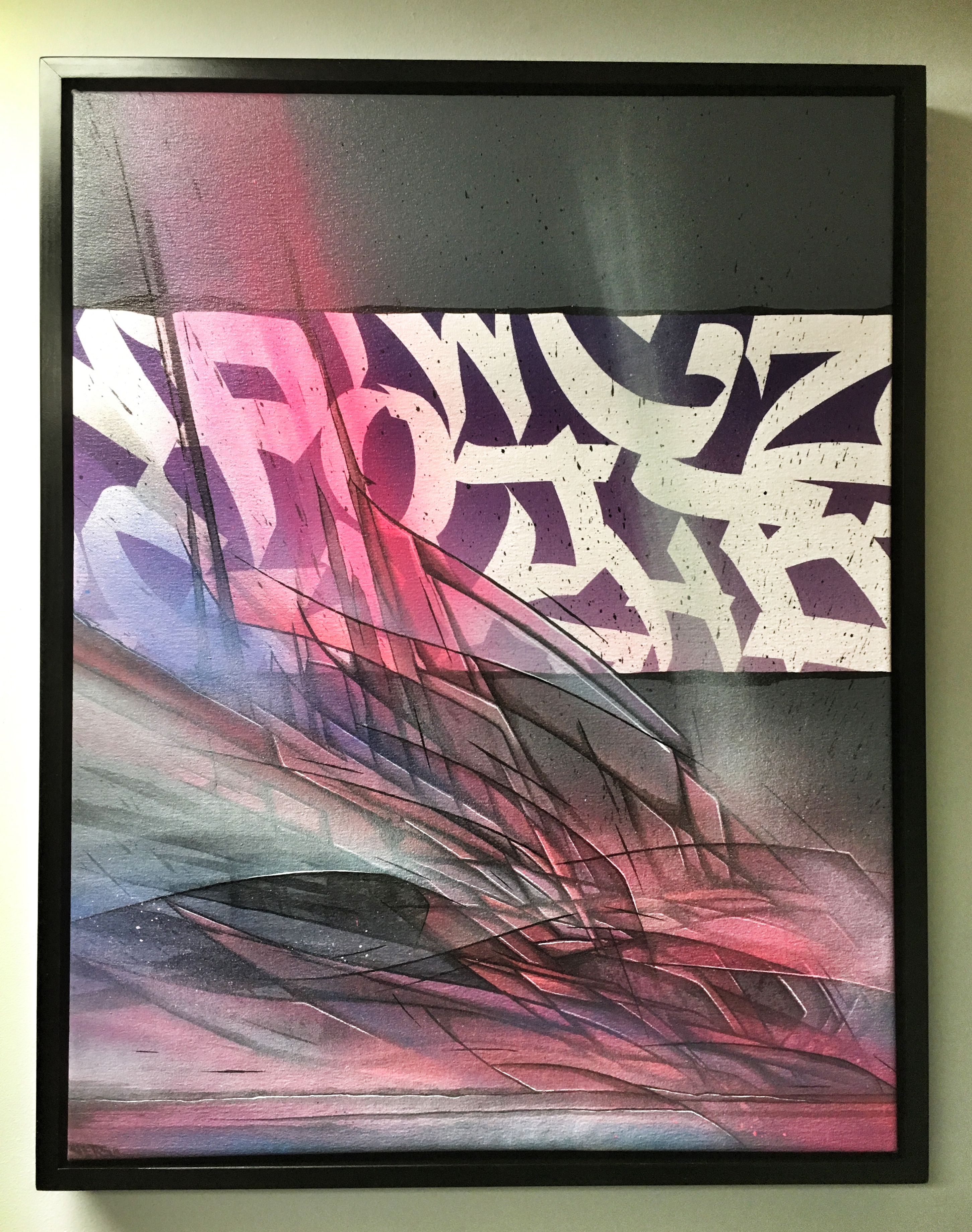 One word- DISCIPLINE… Slacking off is so easy when working for yourself if you’re not careful. Define a daily routine and follow it the same way as if you were reporting to a job. Commit yourself 110%. To be honest, independent work is more demanding than a typical job. My head is always buzzing with new ideas to do lists and follow ups. If you are serious and want to be successful you have to live and breathe your passion. 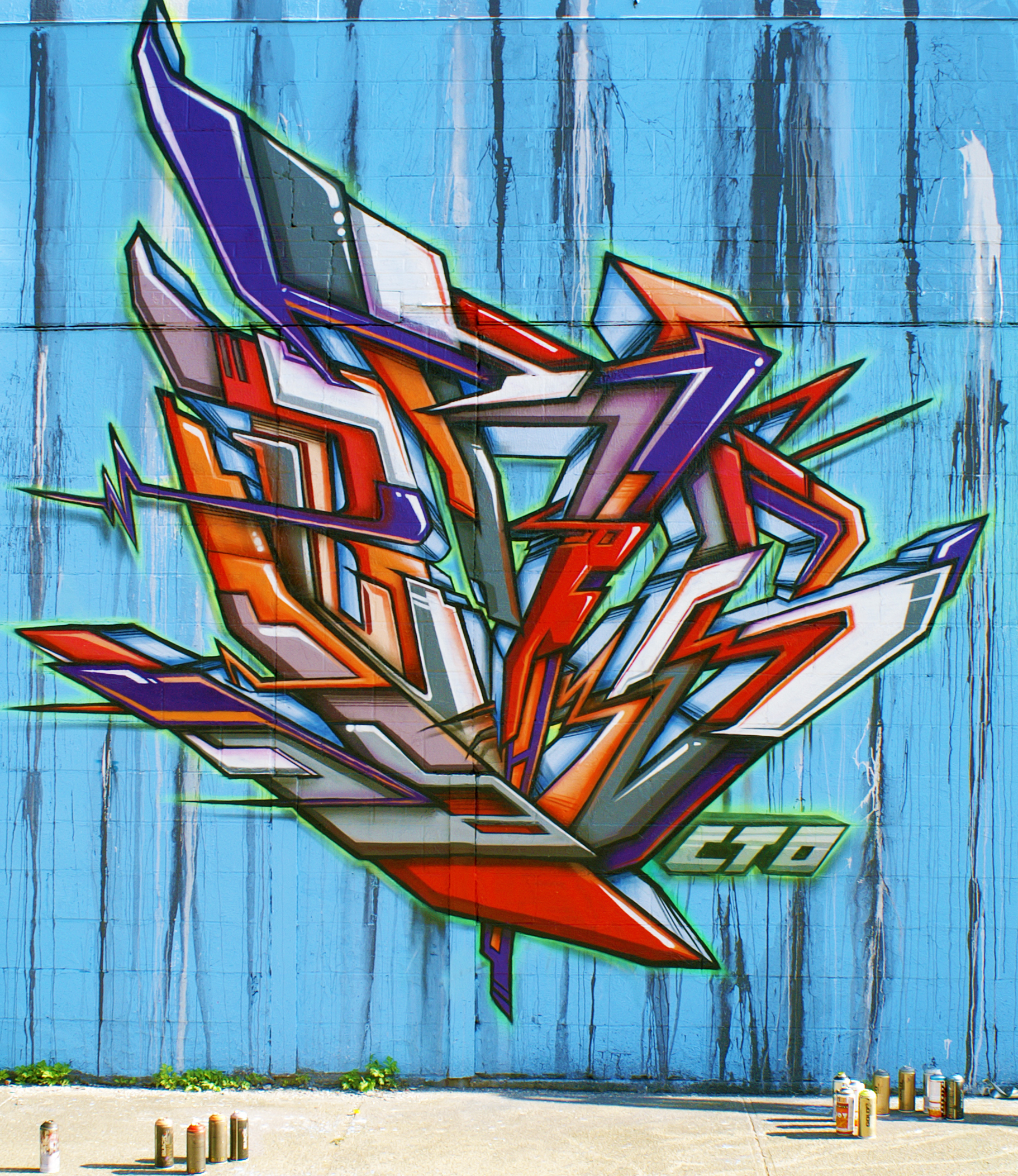 What kind of music do you listen to when you paint? How important is music to what you do daily?

This is an interesting and funny question; my friends (especially NYC guys) bust my balls constantly for my preferences. You see, most of them are into 90’s East Coast Hip Hop but I prefer Techno, Ambient, Electronic music while painting. Hip-Hop or Rock & Roll have lyrics that tell a story from the lyricists’ perspective while I like the escape and the journey your mind creates through the sounds without words. Music is an extremely important part of my day especially when painting. 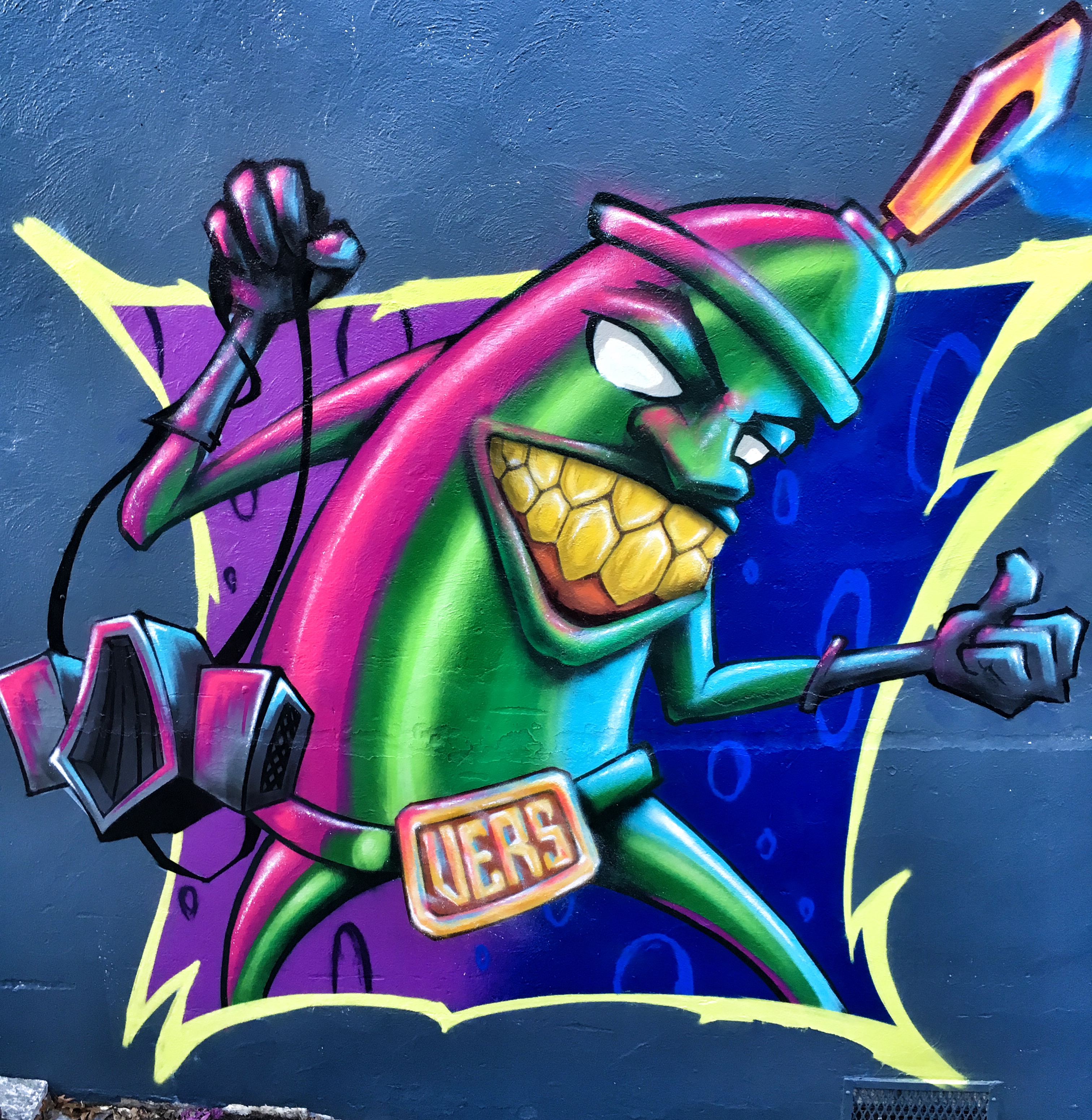 For me, this is an evolving topic, and time to time my answer changes not because I lost respect for an artist over time but because there are so many over the years that as I see a photo of an old piece I remember its impact on me – especially in my early years of graff.

SKEME was a master technician with his letter style on trains. CHINO BYI or DCEE with their killer handstyle tags and throws around Brooklyn. FIB, DUEL, SAINT, who used to crush NYC highways in late 80-early 90’s which was right around time I was getting into bombing highways. Then there were MARS, AIR3, SKOPE2, KAVES who were nasty with piecing. Bronx had some killer walls back then and I’d skip school to go check out some amazing FX productions, DAIM, HESH, with their mind blowing 3D. Writers like SUB were just crushing the character game; CES and PER were style masters. You also had TAT’s CRU slaying walls… Sitting here thinking about it there just too many to name. The list could go on and on.

Back then you had to go out and actually see the artwork to appreciate it. I respect social media and realize how it has broadened horizons of and appreciation for graffiti. Writers are getting much better quicker with so much access to photos and videos. Social media has created great opportunities for me and I don’t want to knock it or sound my age on this but the new generation just won’t experience it the same through a phone screen.

I keep coming back to graff now because graffiti is my recharge in life. Nothing beats a natural high I get from great day out painting with the crew the laughs, the trash talking. I still enjoy the rush of bombing. It reminds me of my early days in graff. Living in NYC “I don’t shit where I eat” as the expression goes because I don’t need Vandal Squad knocking on my door. But when I travel it is an important part of my visit. 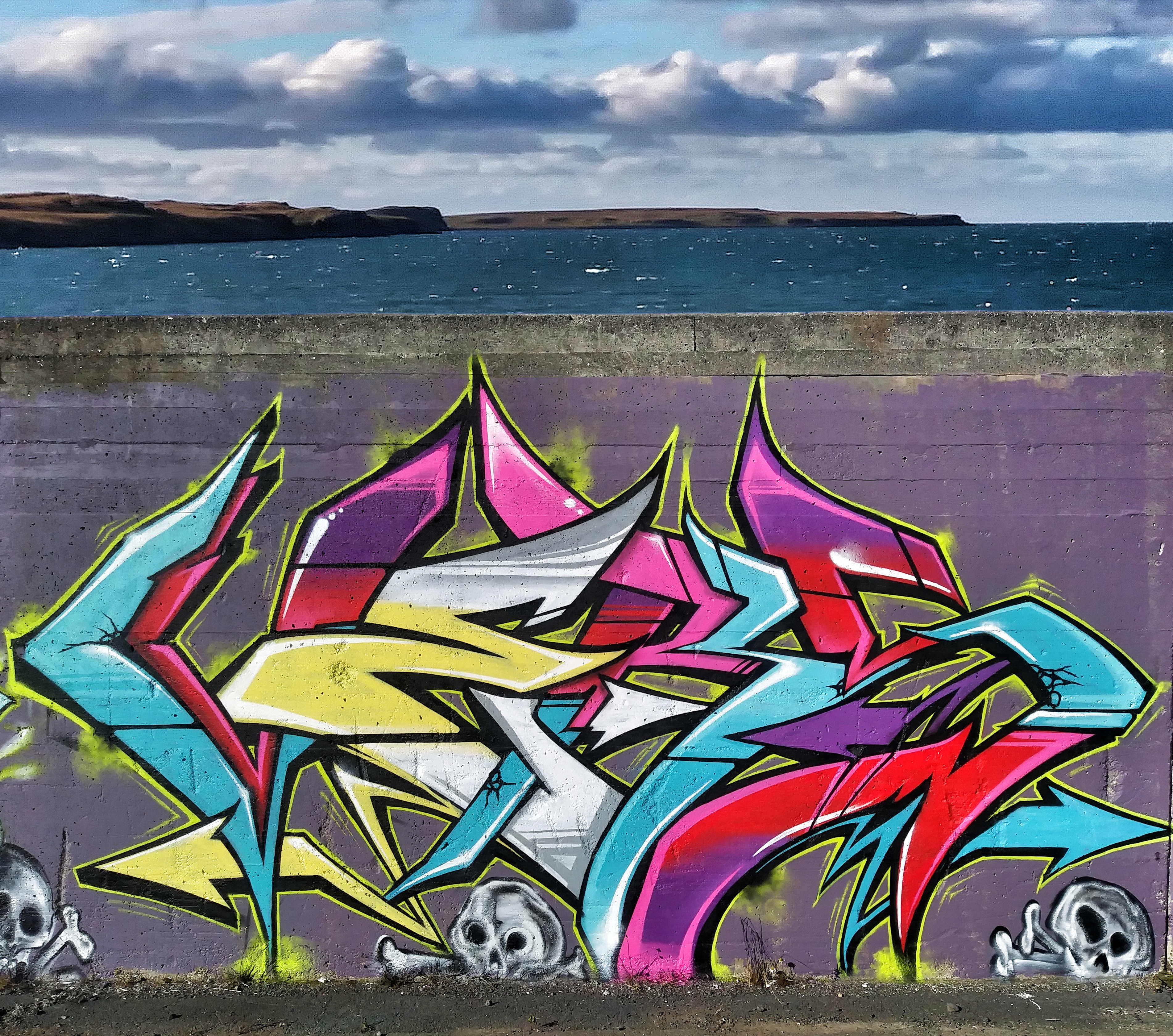 I have quite a few over the years from early highway bombing days to more recent ones in my travels. Fortunately I have been able to travel and paint throughout the globe. I am from the US but it is kind of interesting when it comes to travel. I have been to more countries then to the states in the US.

I travelled most of Europe and touch on a bit of Asia. Germany, Czech Republic, Spain, Hungary, Italy, Portugal, England, Romania, Poland, Austria, Netherlands, France, England, Ireland, Iceland, Belgium, Switzerland, Luxembourg, Norway, Barbados, Mexico, Canada, Costa Rica, Barbados and as far as Japan, S.Korea and one of my favorites Mongolia. I even had the opportunity to live in another favorite place Barcelona, Spain (on and off for about two years) but Brooklyn will always be my favorite and my permanent home..

Mentioning Romania, there is a day worth sharing when I was in Bucharest and linked up OKSEN @oksennesk. So OKSEN organized the whole day – freight trains during the day and metro trains at night. We meet up in the city center with some writers from the RSH crew to head out to the train yard, but first we stop in a store for beer and food. Turned out it was one guy’s birthday and unlike in the States, it’s the birthday person who treats all the friends to drinks not the other way around. So of course, in typical good-friend-ball-breaking fashion everyone makes him buy a massive amount of beer. All stocked up, we head far out of town passing beautiful countryside and a group of gypsies traveling on two wheel horse-carts selling anything from PC parts to handmade trinkets.

The freight yard had pretty easy layout with low key on-duty staff. We had a killer time, smashing all that (now warm) beer and knocking out some pieces for a few hours. Back in the city, we stop by a friends place whose girlfriend was having a party. I would have loved to stay there, surrounded by beautiful Romanian women, but as I joke “graffiti is my girlfriend” and we still had metro trains on the agenda.

OKSEN and I meet up with HUST from Bucharest, MANIA from Norway, a few others and a guy from Russia (whom I won’t name for sake of story). We “strategize” from a construction site near by the metro train yard, figuring out how to get in and how long to stay. This yard actually had a security guard in a booth and security in the office. Luckily someone knew the guard, so a bribe is all we needed. As I start reaching for my wallet trying to figure out if he will take some cash and how much is appropriate to give, one of the guys stops me, takes out two cigarettes and says he got it covered. I look at him puzzled because in the states two cigarettes won’t get you anywhere. The plan is to sneak up to the fence, climb over, bribe the guard, avoid other security and get out in under 20 mins.

We get to the fence and realize the Russian guy is smashed, absolutely wrecked. Dealing with a drunk Russian friend in a bar is usually entertaining but when you’ve got to sneak around or jet out to avoid arrest, you start questioning it. Anyway, the nice guys that we are we took him with us, after all, he travelled far and everyone loves to do a train. I wish we had a recording though of getting him over the fence; it was a mission to say the least, ripped his clothes in several spots on the chainlink. The guard takes the “bribe” and we are off running low along the building to pick the trains. Adrenaline is kicking in but so far so good.

We all do quick pieces; I’m just wrapping it up when in the corner of my eye I notice some commotion. The Russian guy is butt naked running back and forth along the train taking photos. The Russian posing in a ROCKY stance by his piece is (unfortunately) forever burned into my mind. Anyway, everyone made it out fine, we even took a group photo. There was a feeling of victory and we toasted to it with a few beers at a local deli saying “Noroc” (Cheers in Romanian). It was a hell of a day, one I will never forget. 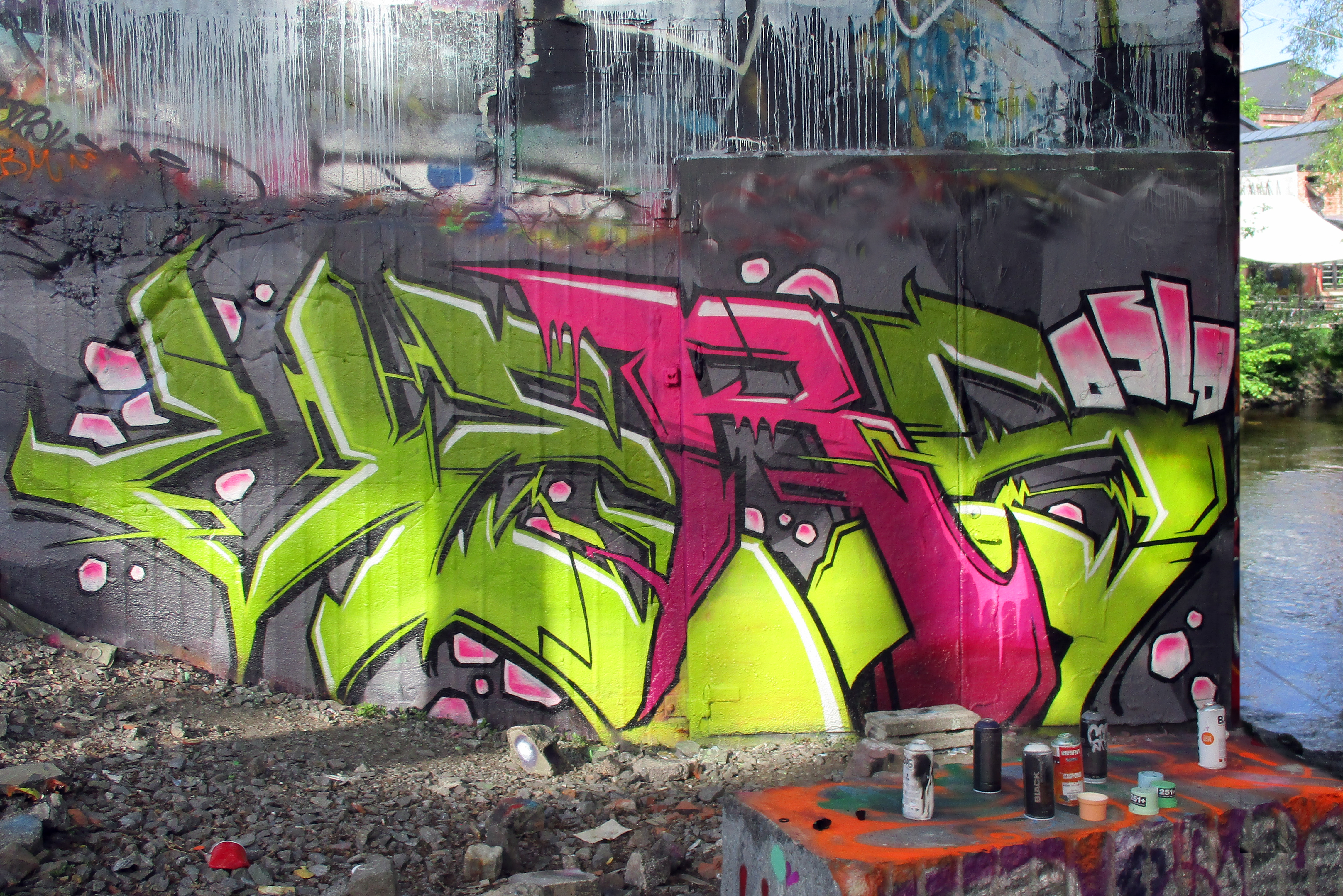 Any shout outs you would like to give? where can people follow you?
I started writing a list of guys but then remembered the one person who always asks me to hook him up. This is his time to shine, much respect to TONY TEO.
Follow me @vers718 and check and out my site www.VERS718.com and my youtube channel 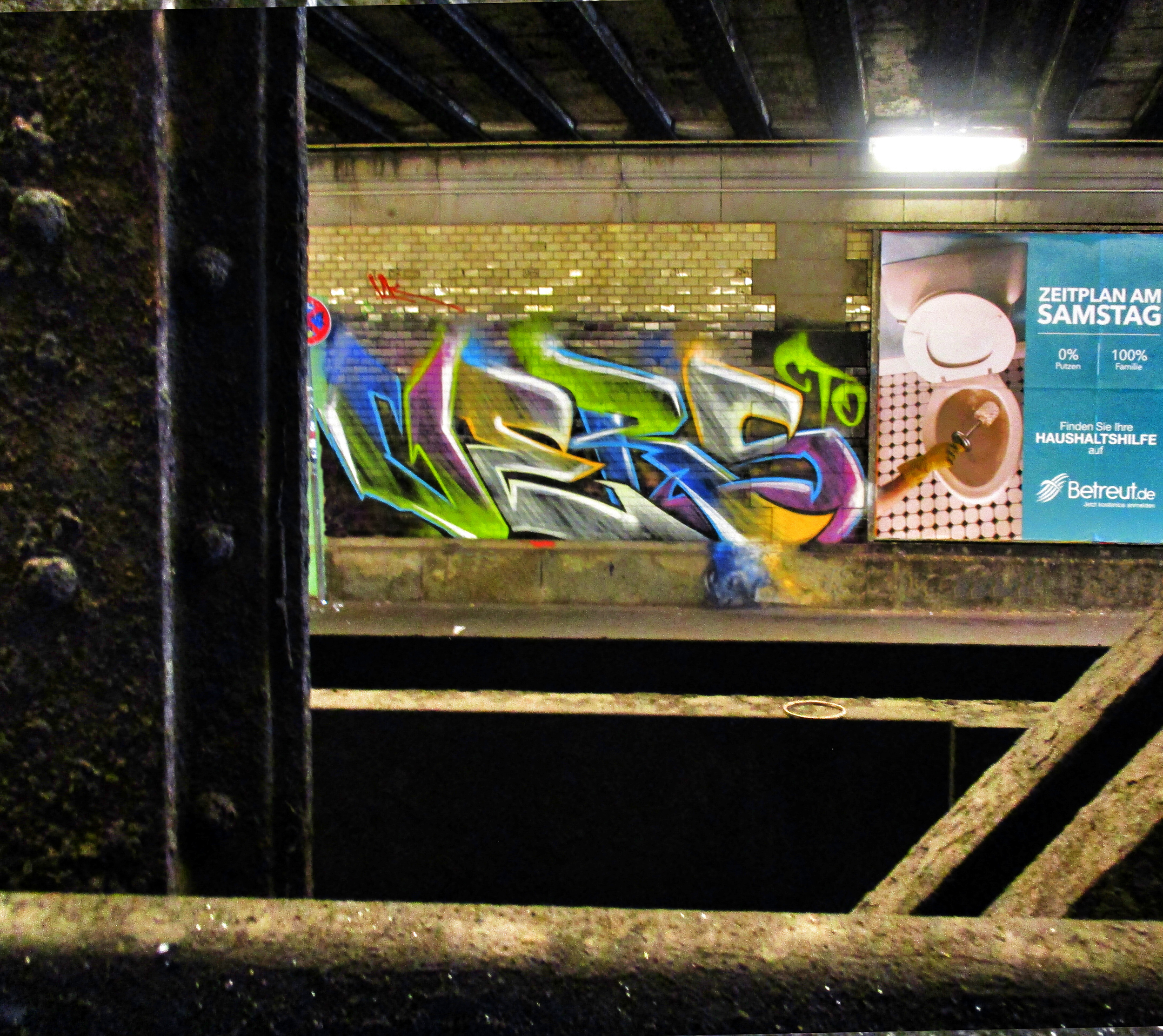 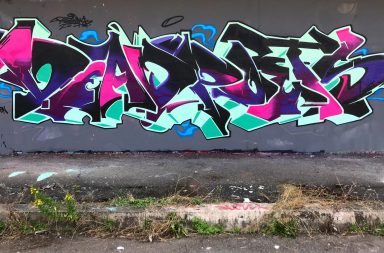 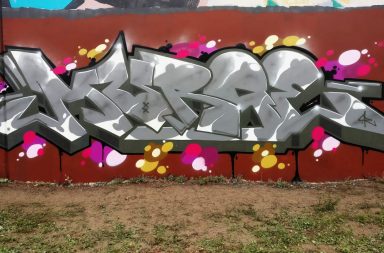 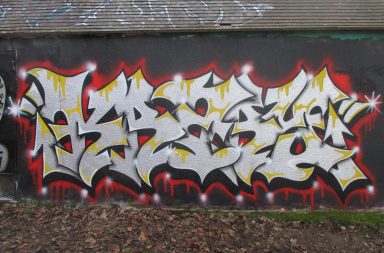