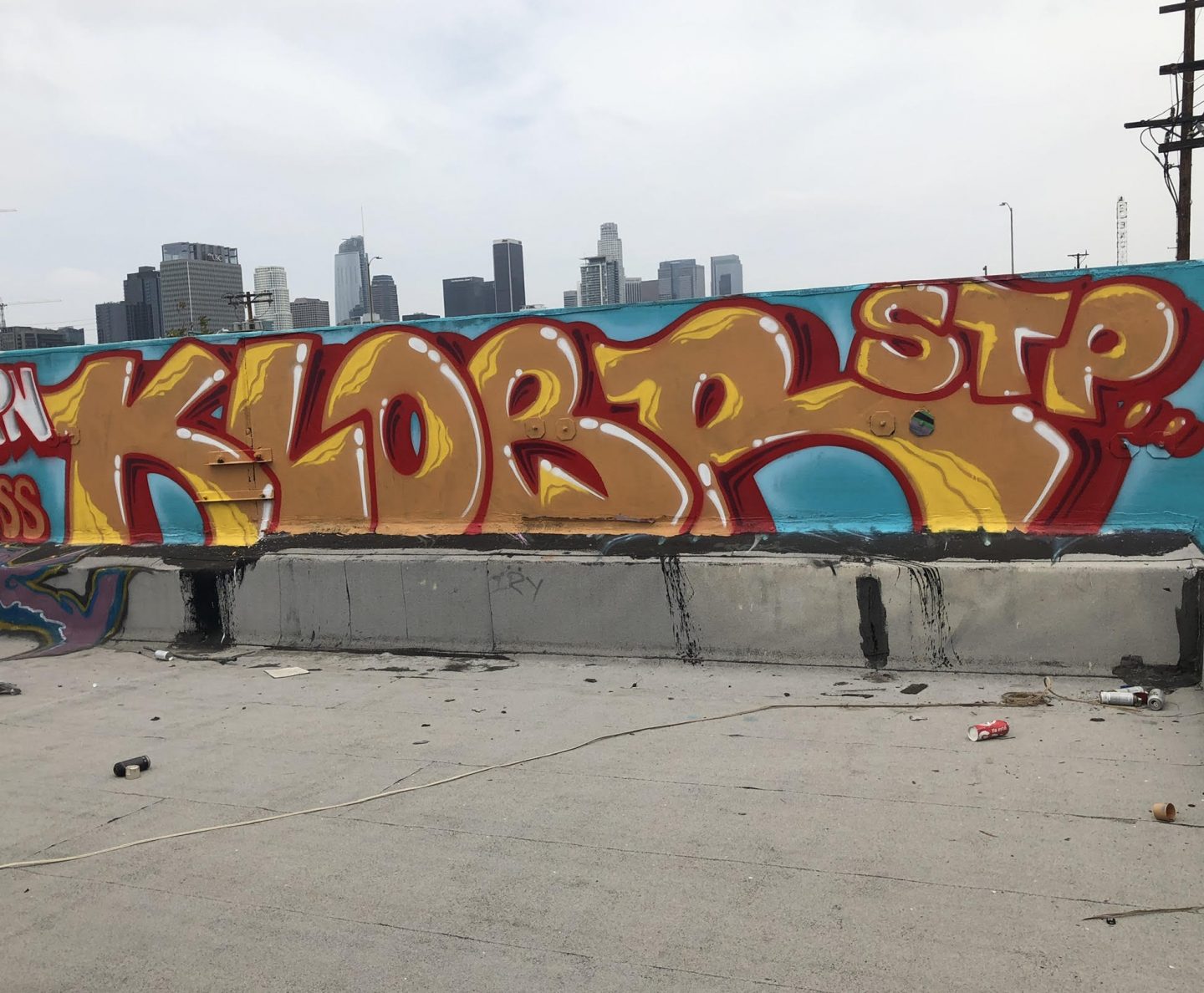 Ok, I think I know what you’re referring to. It’s not so much about ripping artists off, because getting ripped off is, unfortunately, part of being an artist. The City “mural event” was sponsored by or was working in unison with graffiti abatement. The contracted company that works for the city and with the Tucson Police Department to cover graffiti, document incidents of vandalism and helps the cops build cases. And I don’t fuck with any of that, that’s the enemy in my eyes. I had a lot of people sending me links and shit to get involved and do a mural for the city. I didn’t want to reply to each individual message so that post kinda sums up my feelings on the matter. The company that’s been covering my murals for 20 years isn’t going to get any help in renewing their contracts off of me doing a mural for them. Fuck that and fuck anyone who works with the police…

4) I see you offer a variety of products with skateboards and canvases for sale, I’m curious what your experience has been with selling products to your following. Do you plan to turn your art into a full-time business and what do you do for daytime work?

Yeah, I’ve always been into producing artwork. Since way before graffiti presented itself. Making art that’s graffiti related seemed like a no brainer to me. I never originally had the intention of selling any of it, it was more just to decorate my own home when I had one or give to friends. Once people started showing interest or asking for commissions I jumped on it. Same with gallery shows, it’s just another place to put up my name, plus I could get lucky and make a few bucks. I currently make a living off of my artwork and have been tattooing professionally for about 8 years. I’ve been very fortunate in that way.

5) do you participate in a lot of festivals and jams? If so which ones are your favorite and why? Would you say the community is the reason you love graffiti?

Depending on who’s putting on the event, I love graff jams! Any excuse to travel, I’ll take it. I love rolling out as a crew, showing up and putting together a good wall, seeing what kind of food a place has to offer, sightseeing, and going out and exploring for new spots at night. I try and stay an extra day or two to go to local spots and meet people who are doing good shit in that area. YPN has been doing the Kansas City Masterpiece event since it started, Iv been out the last two years and that jam is fucking awesome. Put on by great people, buncha crushers show up and everything is good vibes. That’s the event that I always look forward to.

6) What kind of music do you listen to when you paint? Who is your favorite hip hop artist and why?

I listen to a lot, depends on the mood. If I’m painting with people it’s chill to just throw on the classics and enjoy the day and be able to joke and talk shit with whoever’s at the wall. Those are some of the best times. If I’m mobbing on foot it could be anything from Misfits to Biggie, or Ceremony to old Kanye. I don’t give a fuck as long as there’s music on, and Iv never really tried to impress anyone with my taste in music. I like a lot of shit music, but sometimes it’s perfect for the circumstances. Favorite hip hop artist? Redman. If you consider yourself a hip hop head I don’t think it needs explanation. Also, Gangstarr put out a new album this year for anyone who didn’t know already…

7) For those out there that are hungry to improve at their craft but don’t know how to exactly what do you recommend? Is there any specific practice or exercise that you have discovered that has helped you over the years?

I mean the only way to get better is practice. Repetition. Go out and empty cans, try different tips and paint brands. Take advice and be open but don’t take other people’s word as law, I’m probably full of shit. Find out what you like, stop copying shit of the Internet, we can tell.

8) in one of your posts you mention the piece you featured as a “throwback to when I got stung by a shitload of bees with @yarbsthepirate”. It sounds like there is a funny story behind this piece (please include the piece in attachment) can you share it or tell us your craziest memories from your years of tagging?

Fuckin bees man. Me and my homie Yarbs we’re painting a yard. To leave, you have to walk along this ledge to get out. It’s nothing crazy tall, just rocks and shitty old water from Last weeks rain about 8ft down. I walked past a little hole in a cement wall with a couple of bees flying around it but didn’t think twice, swatted them out of the way and kept moving. A second later I feel a sharp pain on my stomach. Yarbs says “oh shit”, I turn around and see a shitload of bees flying out of this hole in the wall behind us. I feel a sharp pain in my leg and then I say “oh shit” and take off running. We ran completely out of the yard, bees chasing us, Yarbs threw his fuckin beer in the air, it had to look hilarious if anyone was lucky enough to catch it. I got out of the area enough to where the bees weren’t following any longer. Pulled all the bees off of our clothes and counted up stings. Yarbs didn’t get stung, I definitely caught a couple. Fuckin bees man.

9) when you were coming up who inspired you and taught you the ropes and who inspires you now? Who are the artists that are inspiring you now?

Coming up here in Tucson I looked up to Token, Lex, Jawser. In Arizona as a whole state, I looked up to NG. There wasn’t really internet like that yet, so out of town graff were magazines and travel. Lex was probably the one doing it the longest in Tucson, I think. He showed me a lot of love when I started, put me on walls I wasn’t good enough to be on. I owe a lot to that dude. I remember he called me one afternoon and asked how I was, then he said: “say hi, I have the homie on 3way”. It was Cope2. In 2004/5ish that was way cool. I probably said some dumb ass shit that made me look like a clown, but I was hyped hahahahah.

Shout out to my girlfriend, she’s the shit. I wouldn’t be able to do a lot of what I do if she wasn’t so cool and put up with all my dumb shit. @noir138 Shout out to everyone. Fuck it I love you all. You can follow me on Instagram @TheKlober I might have a link to my tattoo stuff on there. Thank you to my Crews and everyone who’s ever shown me love, and shout out to anyone who ever talked shit or thought I sucked. You made me way better than anyone else could have.