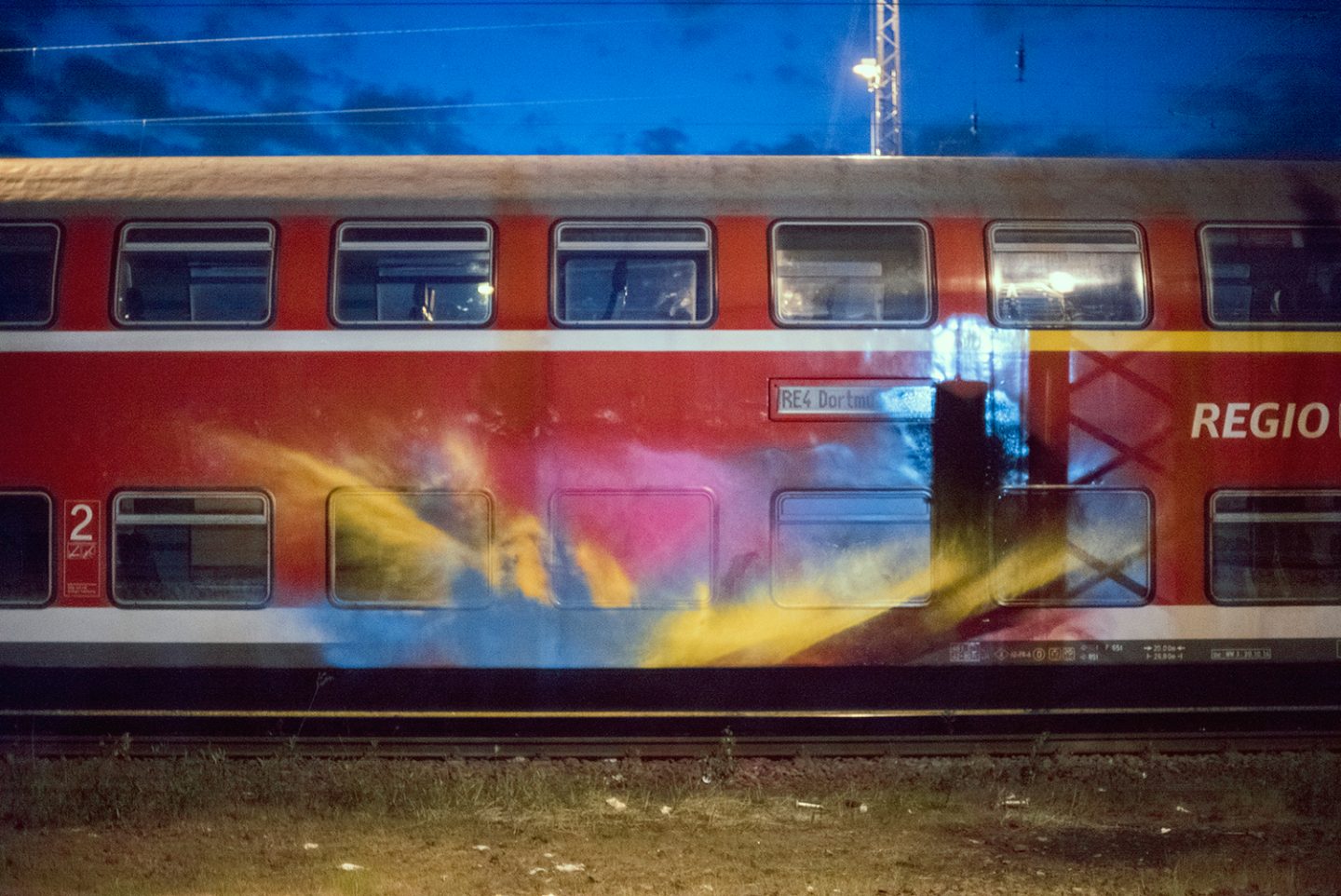 This article was first published on 12ozprophet.com in 2015.

In a new interview with The Grifters, well known German duo Moses and Taps give a full rundown of ‘their’ craft at this moment in time and it makes for intriguing reading. Progressing from European style Train painting they’re now making work that has parallels with wider traditional painting and beyond that, creating pieces that explore what Vandalism itself can do for the creative urge.

“The public opinion is absolutely irrelevant when you are expressing yourself.”

To Moses and Taps the traditional model of post-Style Wars graffiti has stagnated, relaxing into a state of circular letterism that hasn’t made any major movements forwards in around 40 years. Graffiti writers reference graffiti writers and graffiti to produce graffiti, when in fact the original progenitors of the art form built these foundational styles on anything but graffiti, as there wasn’t any stylistic predispositions to inherit.

It is here where the similarities of movements within modern painting begin to appear with immediate echoes of the inherent physicality of Abstract Expressionism where the ‘action painting’ of Pollock and Franz Kline saw movement and automatism as primary into unlocking the honest truth behind a painting as it was intimately connected with a state of mind.

Breaking away from accepted conventions in both technique and subject matter, the artists made monumentally scaled works that stood as reflections of their individual psyches—and in doing so, attempted to tap into universal inner sources. These artists valued spontaneity and improvisation, and they accorded the highest importance to process. Their work resists stylistic categorization, but it can be clustered around two basic inclinations: an emphasis on dynamic, energetic gesture, in contrast to a reflective, cerebral focus on more open fields of color. In either case, the imagery was primarily abstract. Even when depicting images based on visual realities, the Abstract Expressionists favored a highly abstracted mode.

The work Taps and Moses are speaking about is their celebrated SPLASH! pieces (pictured above) where cans were burst onto trains or the floor and the finished piece resulted as a consequence of matching the colours:

With SPLASH, we skip this tiresome aspect of painting; the accurate piece. Rather, we concentrate on the [act of painting and the documentation. The message is pithier.

And it is in this breakaway from convention that means we can roughly see Moses and Taps work into 3 categories:

Abstract Expressionism was born from a reaction against the favorable artistic movements of the time in social realism which the Abstract Expressionists simply did not think was suitable given the climate of the Post-War and Great Depression. They did away with the figurative, the representational. Given this movement was reactionary, could we say the same of Taps and Moses? Are letters our Social Realism?  Simply not appropriate with the needs of many of todays graffiti artists?
(edit: in 2020 we can see this is plainly true as there are a lot of people doing very weird things with graffiti).

This also rings notably for PAL Crew from Paris, with artists such as SAEIO fully reducing and exploring this more physical, abstract and reduced style.

It must be a performance! Once you have pierced the spraycan there is no turning back, no second chance. You need to use your whole body to paint and you need to move fast which gives the splash it’s vitality. The result is almost uncontrollable however the techniques to achieve it are. So of course, the technical differences between a SPLASH and a traditional graffiti piece are huge.

SPLASH! to Moses and Taps is the ‘very end of graffiti’ – the reduction to pure physicality and freedom is complete. We have nowhere else to go. But looking at wider elements of Abstract Expressionism we still see some similarities with Moses and Taps work by way of another example – the Automatism directed ‘Subway Drawings’ by William Anastasi

Sitting with a pencil in each hand and a drawing board on his lap, his elbows at an angle of 90 degrees, his shoulders away from the backrest, Anastasi surrenders to a random process. His body operates likes a seismograph, allowing the rhythm of the moving train – its starts, stops and turns, accelerations and decelerations – to be transmitted onto the sheet of paper.

Furthermore, we only need look at their recent interventional artwork ‘The Wall’ to see how Moses and Taps have elaborated their practice beyond traditional means into a wider interest in Vandalism itself in both its expressive and transgressive natures. By literally building a wall between the passenger and their transport Moses and Taps have started to question what it really means to make confrontational artwork and in so have expanded on graffiti through its primary intentions – forceful space taking through uninhibited self expression. They have passed beyond letters as a means to confront, they’ll now just literally get in your way.

The question is: is it real to act the martyr and go down in tunnel to paint a Metro that no one will ever see, except the person who will clean it?

What we have now is a really interesting period in graffiti, where many celebrated artists are evolving their practice into the Post-Graffiti  spheres by keeping with the illustrative nature of the art form and others (such as these two) are completely pushing beyond this illustrative boundary and exploring what ‘graffiti’ actually is.