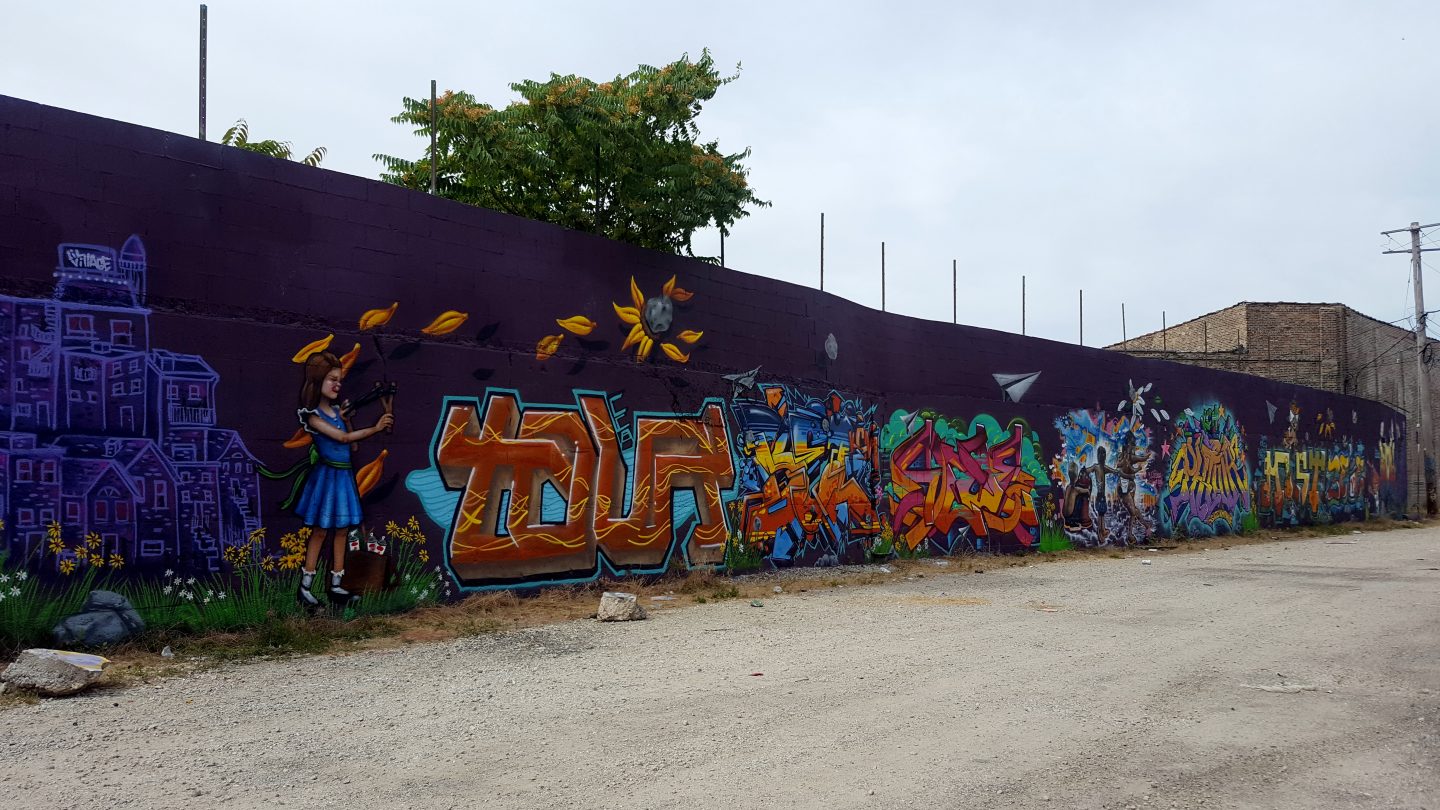 Summer is over, but the walls of summer are still standing strong. One of my favorite walls is the Splash Wall located in the Little Village neighborhood of Chicago in the shadow of Cook County Jail. This is the 3rd summer for this all female jam. The production was made up of Chicago writers Bel2 KCM and Phina KCM who curate the wall, along with Beloved, MonstroChicka, Stef XMEN, LGray, Zeye EDSK, Gloe and Tova CCA. This year they also welcomed Mist from the 559. 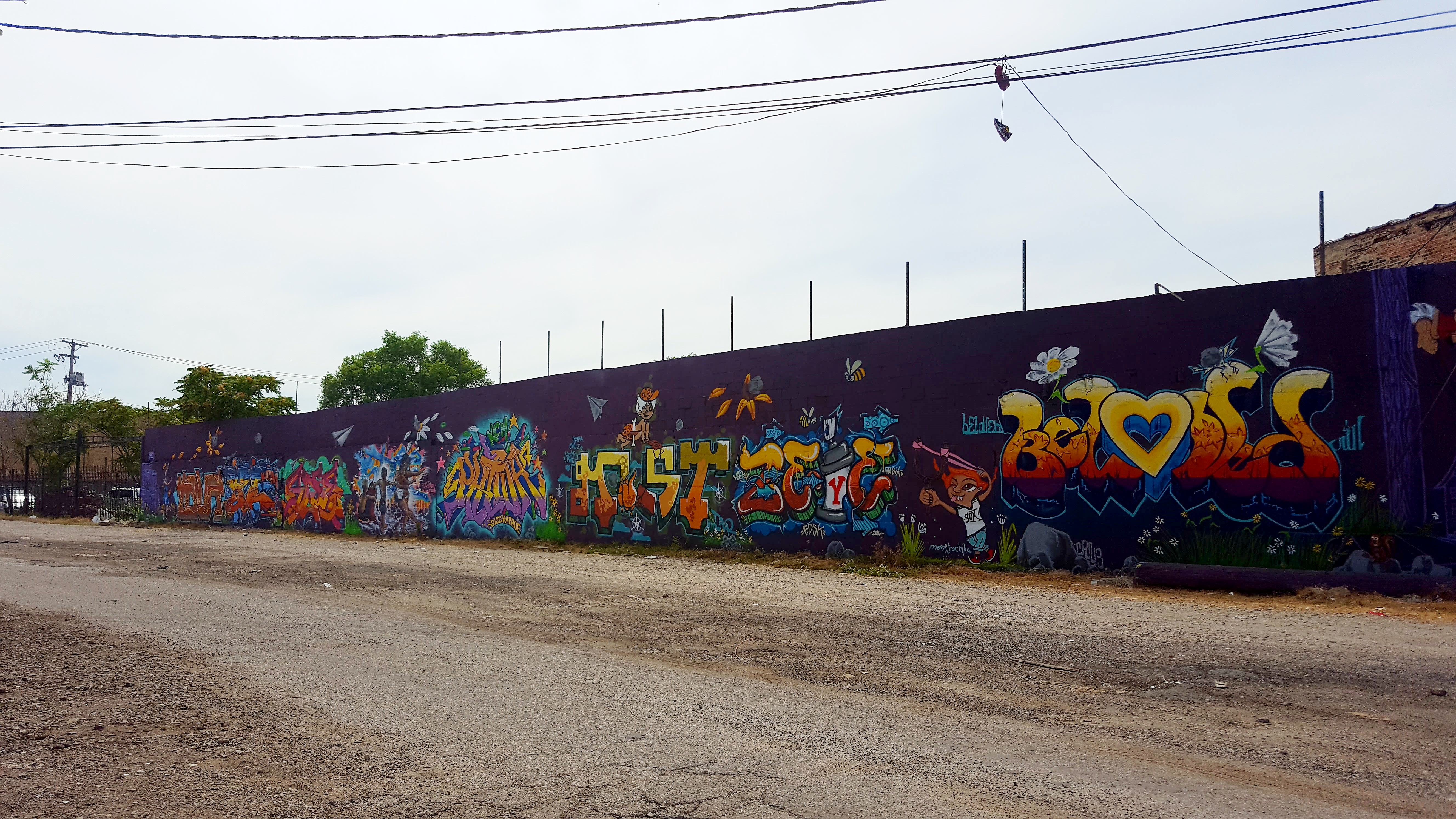 Splash started in the summer of 2014. According to Bel2 and Phina, in the years prior, they were invited to paint by several different writers around Chicago and had a great time jamming with them. As they painted with different male writers they also met and painted with several talented female artists and writers. They just had just acquired an amazing wall, and thought about how dope it would be to organize a female paint jam. “There seems to be more and more young potential female writers these days, and while our male counterparts throw some amazing paint jams and productions, they are mostly male dominated with the exception of a few,” said Bel2 and Phina. “We thought, why not provide a space to showcase as many female artists and writers, that can hold their own, from around the city.” They wanted to show everyone that Chicago has a strong female graff presence, and a damn good one too!

When I asked how they decided who would participate in the Splash event, they said they wanted to make sure there was a wide range of experience, ages, and talent. They ask themselves: Are they passionate? Do they paint their own pieces or characters without help from anyone? Do they produce solid work? and Will they be able to be present for the majority of the jam? They said several of the girls come back each year but it can change due to schedules and availability. They always leave several spots open for artists who are new to Splash, as well as for any ladies from out-of-town that want to join in.

Since 2013 when they acquired the wall, they have always run it. They have used it for Splash, but also for their crew and invited guests to have a space to paint throughout the years.

Phina said it was important for them to get a wall in Little Village. “I grew up in that neighborhood and love going back.” When they started Splash they knew the impact they would have on the female artists and graff scene, but they didn’t realize how much it would impact the community. The flyers for the event say it is a kid-friendly event. Not only do the kids stop by, but whole families take walks to the wall to take pictures and watch the ladies paint. Friends come out and play music, cook up eats on the grill and make it a real nice event for the community as well as the artists involved. “I’ve worked with the youth in several communities including this one,” said Bel2. “It’s very rewarding to know that they ask about Splash and even volunteer to help in any way possible. Teaching art in these communities is definitely making a positive impact, and I’m glad to be a part of it.”

The impact they make on the neighborhood girls can be seen throughout the event. Phina said, “It’s great to hear little girls whispering about how they love the colors and want to try it too – the smiles – even stopping to answer their questions – it feels amazing to bring joy to my neighborhood.”

Starting at a young age and being a female in the graff scene has its challenges for both Bel2 and Phina. Phina has been writing since she was 12 and started piecing in 2012. Phina says for the most part she’s had good experiences with the guys. “They’ve showed us, mad support and respect, and it seems that as time goes on, the idea of a female aerosol artist/graffiti artist is more and more common.”

Bel2 has been writing since she was 13 and started piecing in 2009. Bel2 said that more often than not, she always received mad love and support from other writers. “I’m always truly humbled by how much love I get from all the homies,” said Bel2. “The most challenging part has been getting up in the boys bathroom without getting looked at like a creep for being in there.”

I also had the honor of spending some time with another one of the ladies, Zeye EDSK this past weekend. 2016 was Zeye’s second year participating in the Splash wall. Zeye’s interest in graffiti was sparked when she was around 12 or 13. At that time she would go out tagging and use her grandmother’s leftover paint from her job at a paint factory. She’s been drawing for as long as she can remember but took a break from it until about 3 years ago. “I love the Splash wall because it is such an awesome experience to meet other women who are so humble and not hating on each other,” said Zeye. “They give props to each other and lift spirits through the production.”

Zeye’s artistic influences come from Chicano, Mexican, Buddhist and Hindu art. She drives herself to do better on every new piece but says that working with so many dudes also pushes her even harder to disturb and enlighten people. She loves people to look at her art and question it and expand their minds. For the past year she has been focused on her characters. She loves her letters, but feels the graff world needs characters too – like a cherry on top. Zey also likes her characters because they take less paint than letters.

Be sure to check this wall out next time you’re in Little Village. and for more information on the Splash Wall or any of these awesome ladies, please check out their instagram pages @kampaneeta @k_phina or @labrowneyezzz. 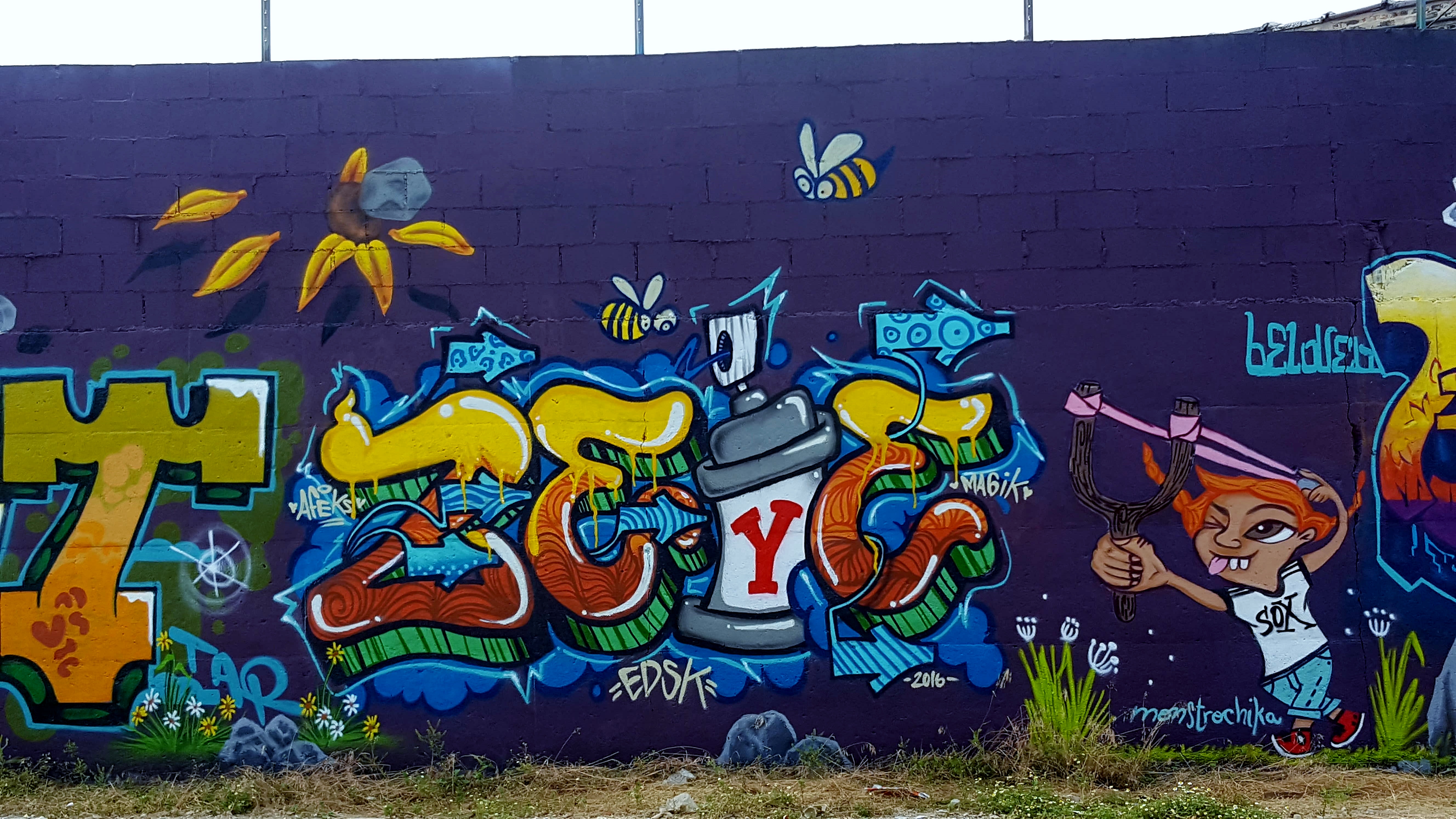 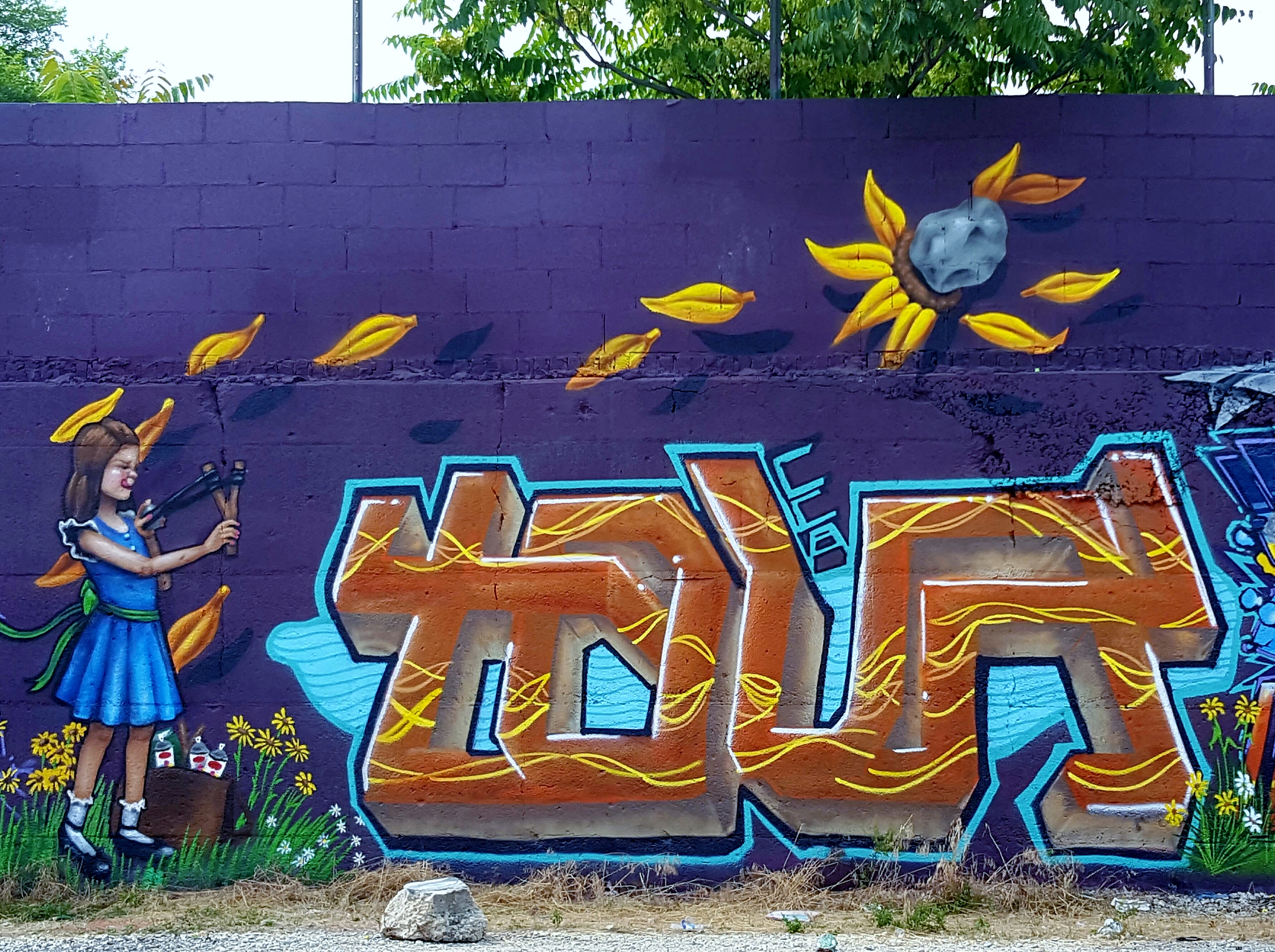 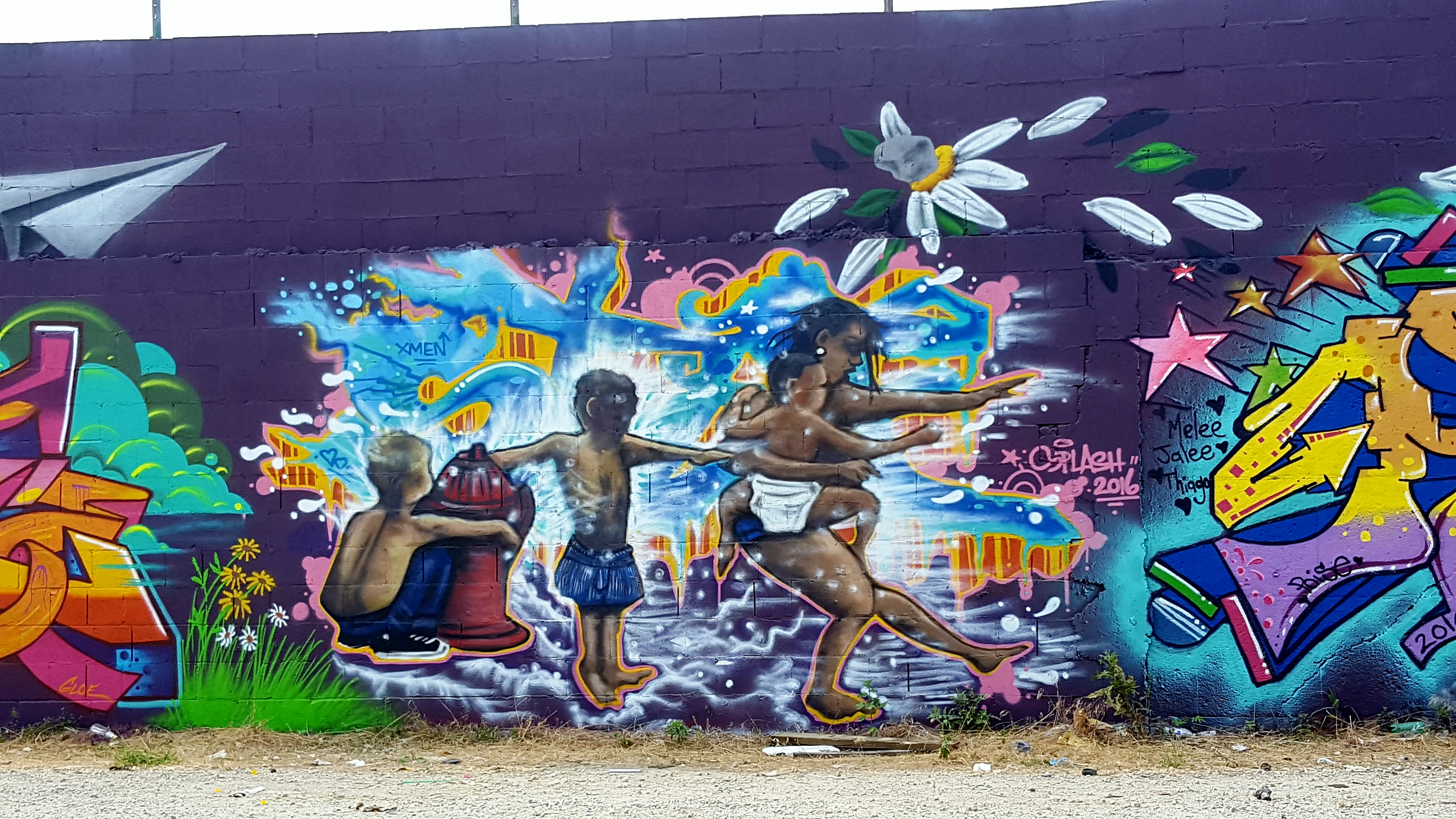 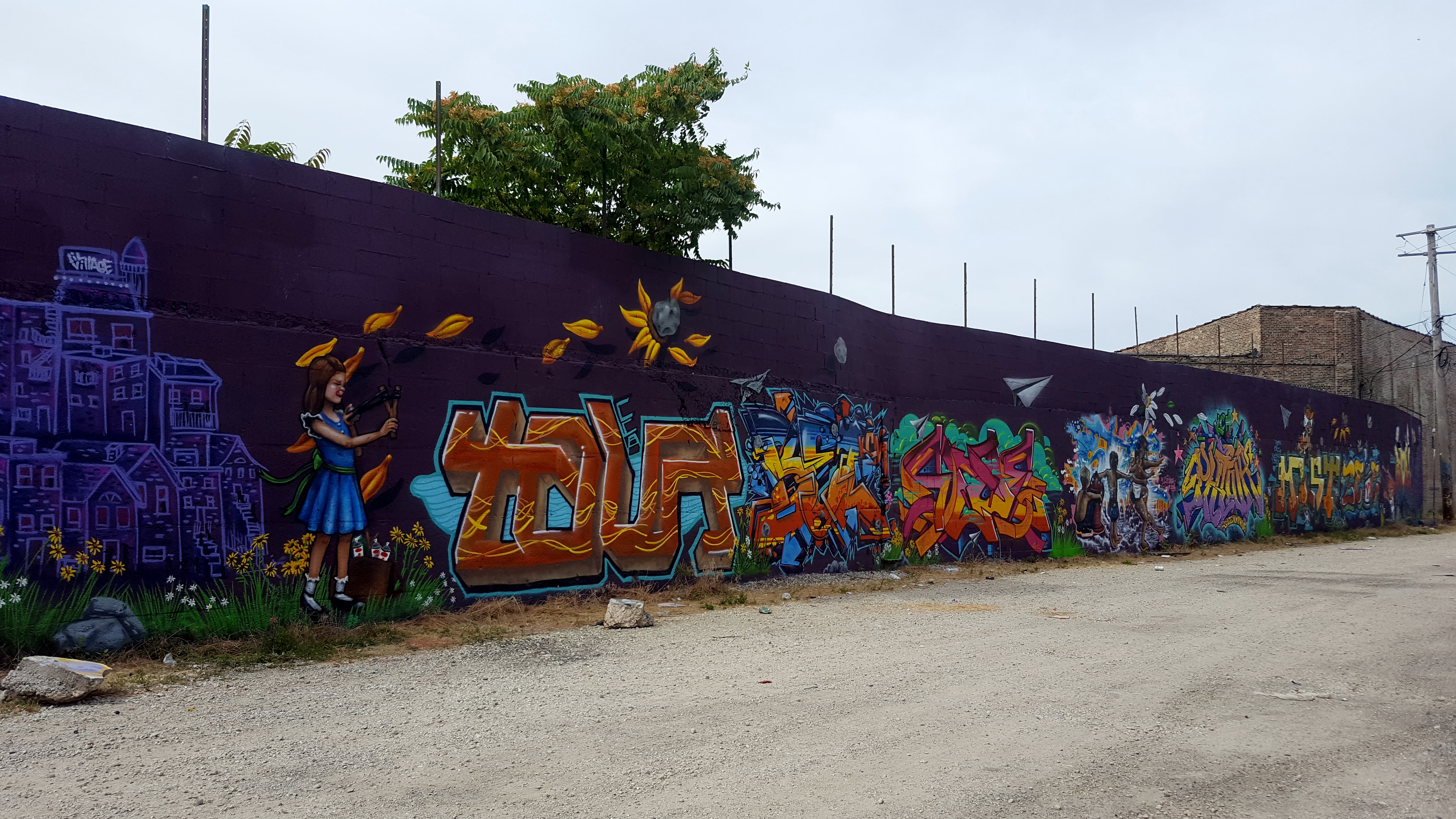 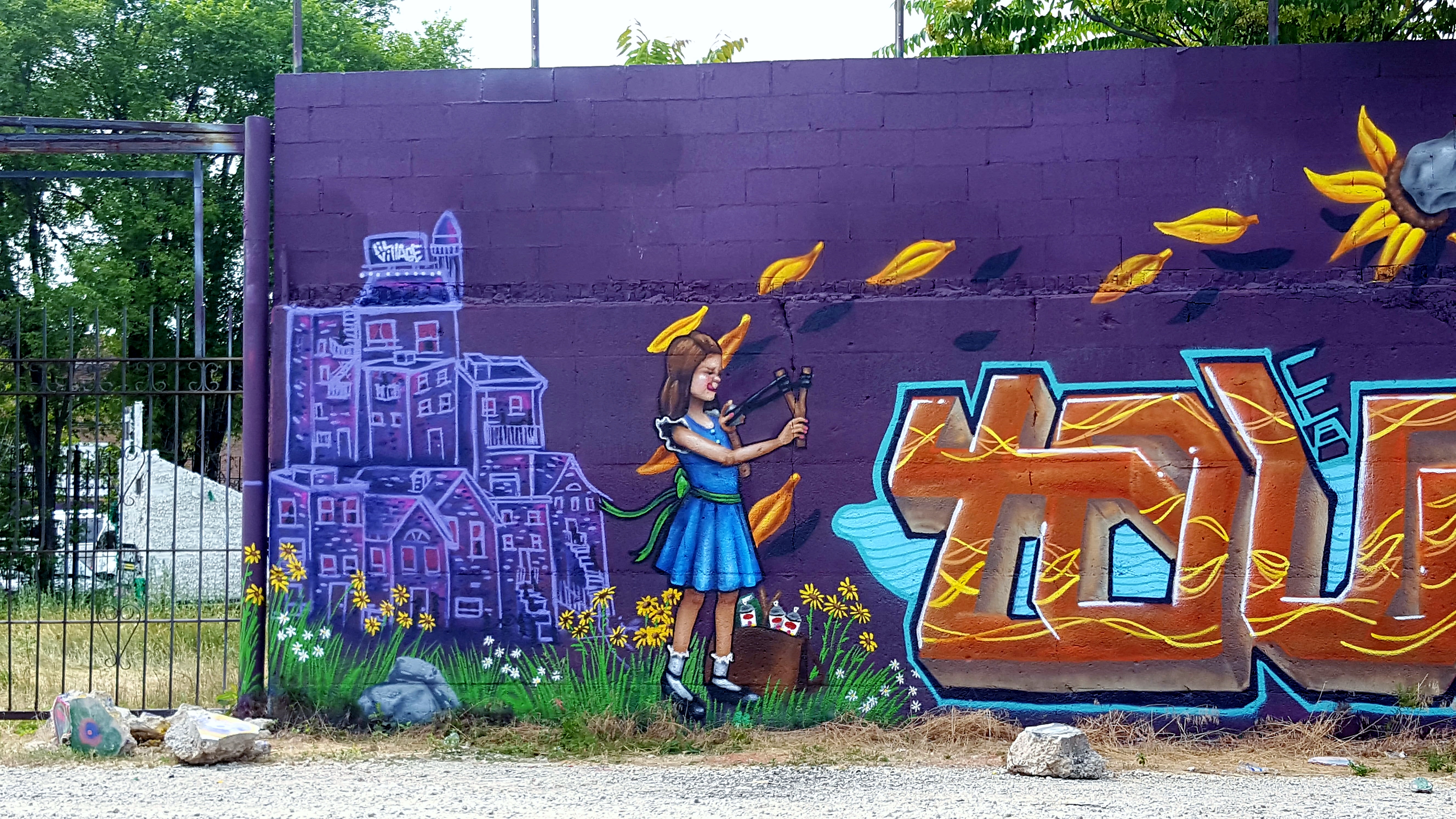 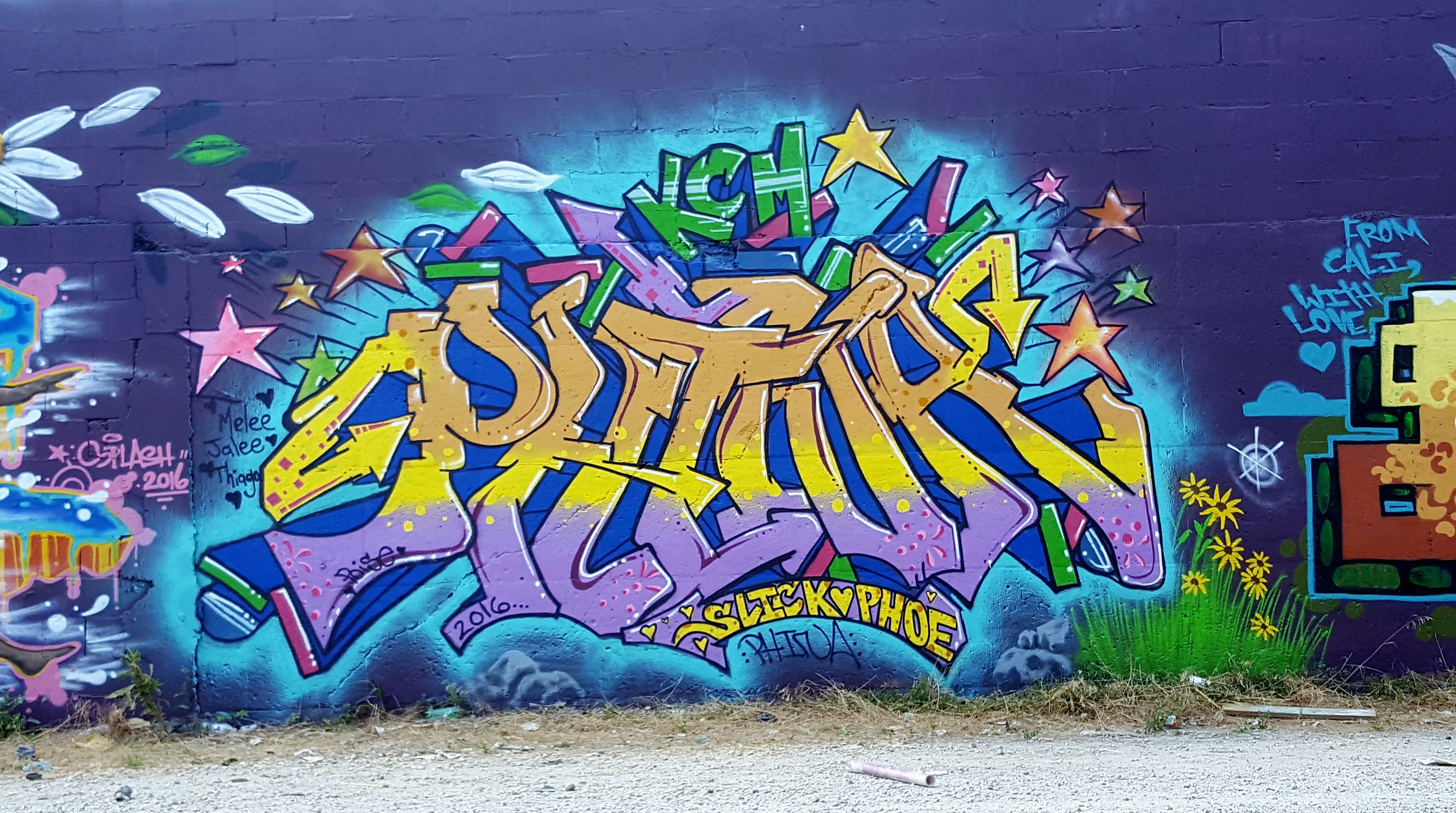 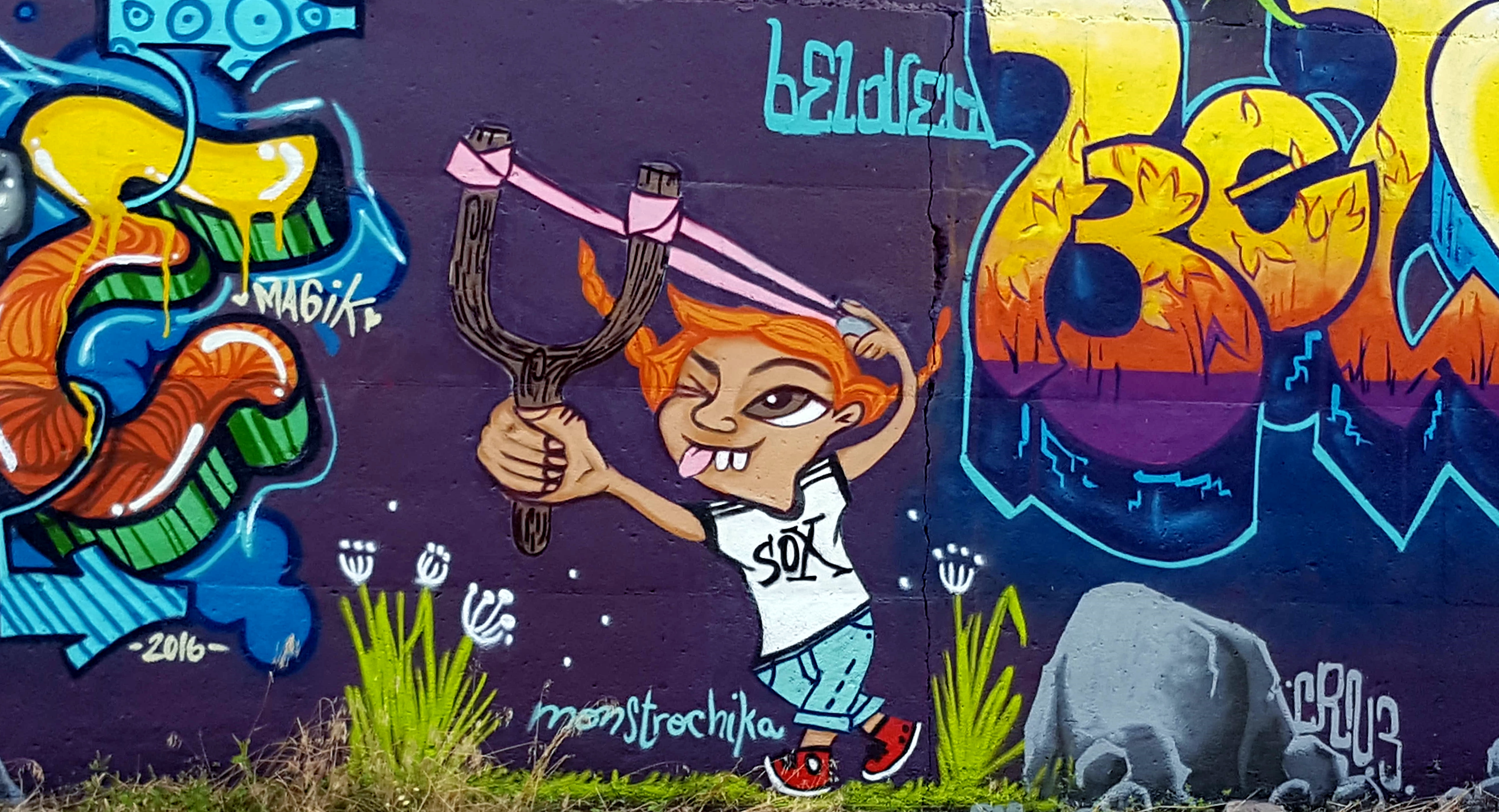 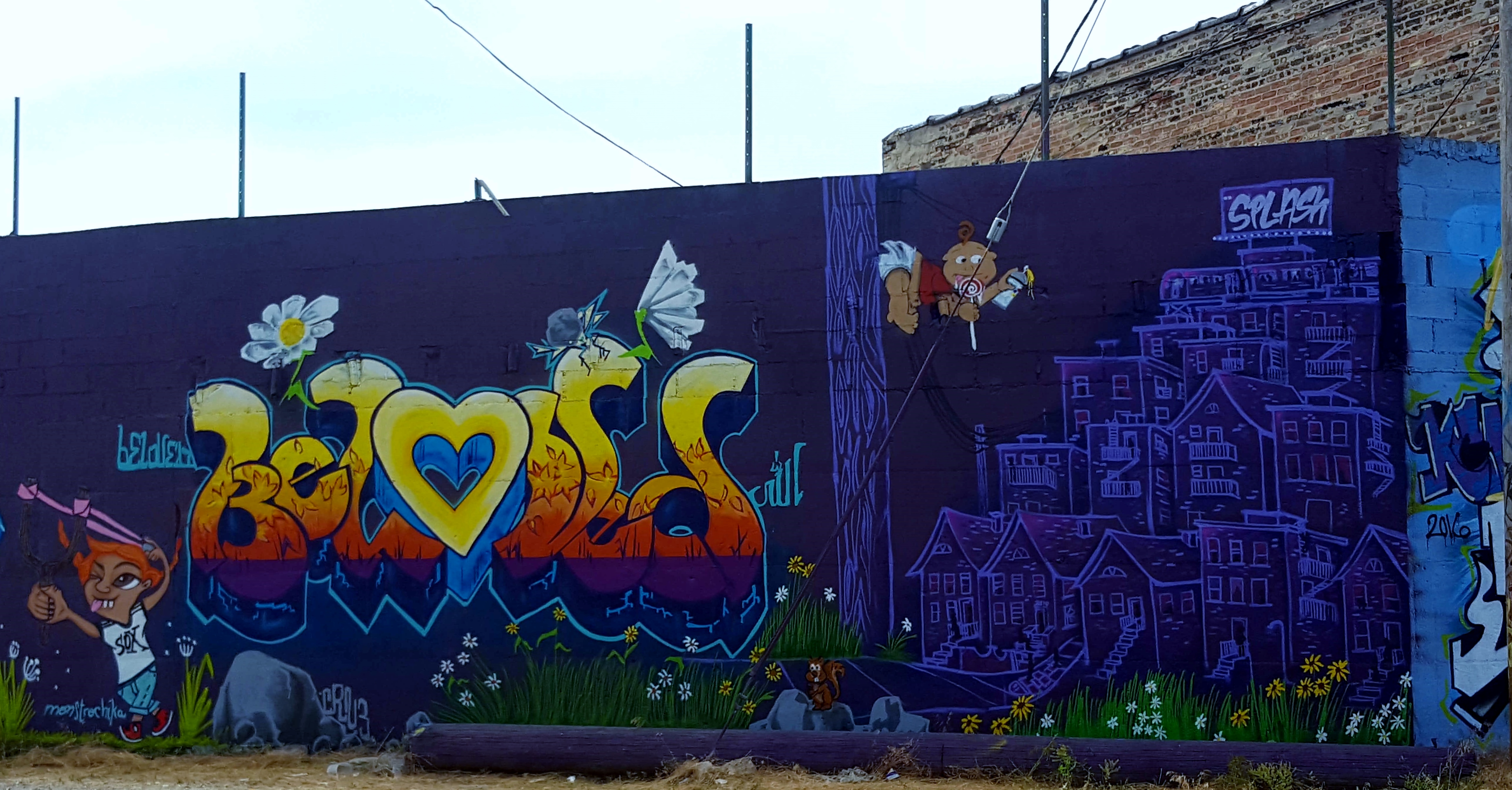 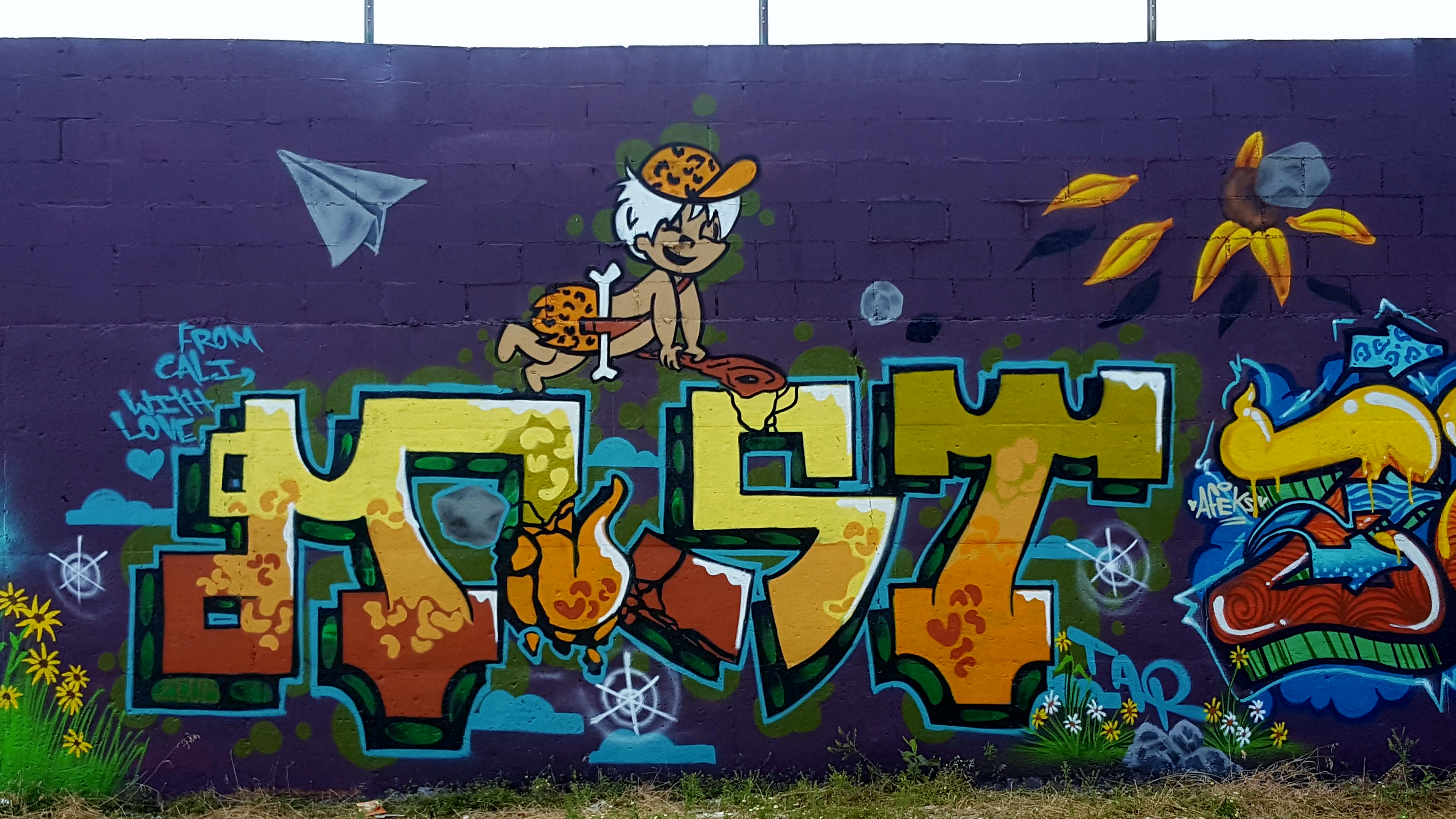 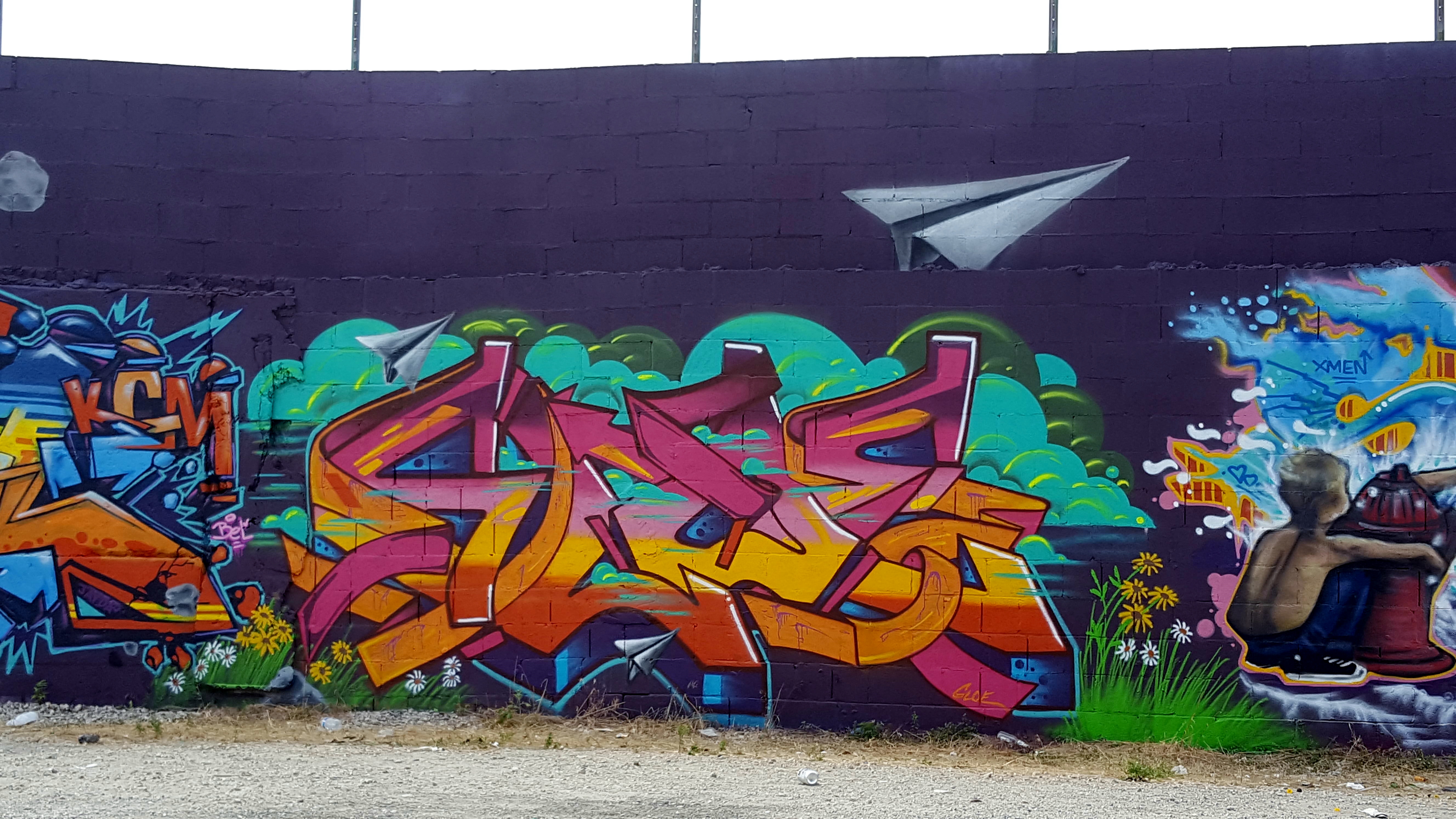 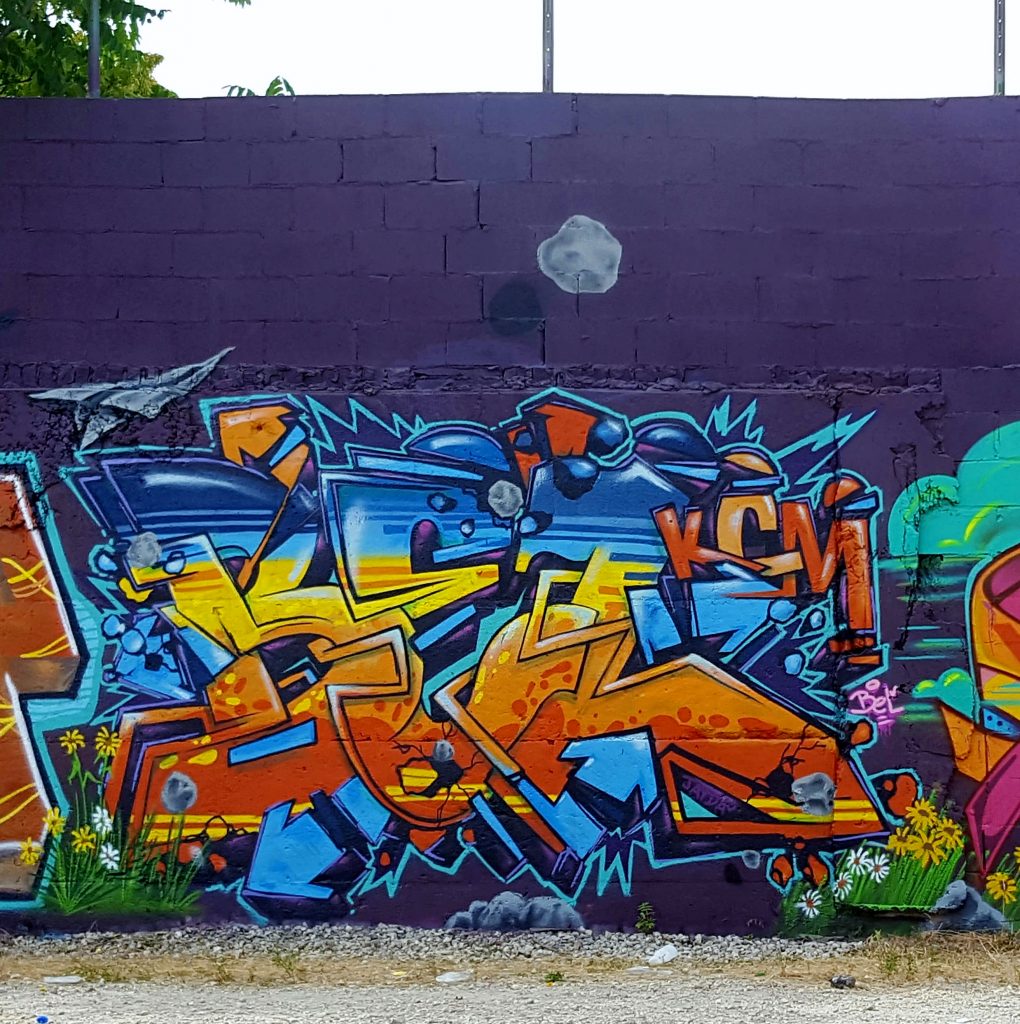 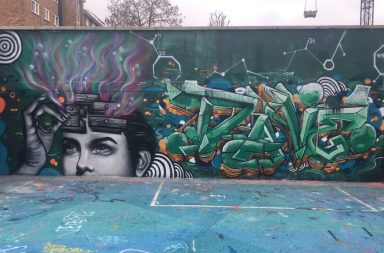 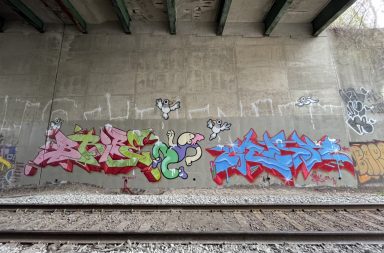 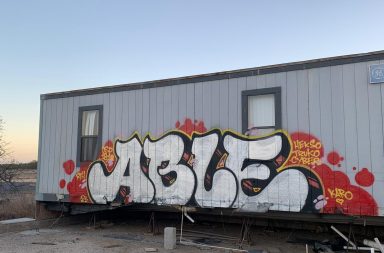