Bombing Science:  Hello. Please introduce yourself to the Bombing Science readers. What’s your name? Where are you from? Who’s your crew?

BS: How did you get the name Xeme? What is the meaning behind it?

Xeme: It doesn’t really means anything. I simply like the letter "x" plus not too many people starts their tag with a "x". And "eme" was just a random combination.

BS: What does a typical day in the life of Xeme consist of?

BS: Hong Kong’s graffiti scene is relatively new. Who do you consider as the pioneers of the genre? Do you include yourself among them?

Xeme: Graf started here in the early 90s by foreigners. Some locals began to write a few years later. The first bombing crew that truly went all city was FDC.  I started writing in late 01, so I definitely do not considering myself a pioneer.

BS: What motivates you to write?

Xeme: Can’t explain, it’s something in the blood…

BS: What keeps you humble?

Xeme: Nah, I’m an asshole in many ways, haha.

BS: What separates you from other writers in Hong Kong?

Xeme: I think everyone down here is unique. Most people have different styles, different game rules and so on.

Xeme: I just hope that more people write and do not quit. People down here just come and go too fast. There are like 10 active writers 10 years ago and it’s the same number 10 years later… wtf…
I think it’s a fairly peaceful scene compare to any city in the world. So perhaps this shall remain.

BS: Who/what outside of the graffiti world influences your artistry?

BS: Name an artist you would like to collaborate with? And why?

Xeme: Anyone that’s not big headed will do.

BS: If you weren’t writing [graffiti] what would you be doing?

BS: Graffiti is a non-verbal form of storytelling. What kind of stories do you tell with your art?

Xeme: I usually would piece some random Chinese words. It could be a flash thought, a dedication to someone, a local slang, or anything that comes to my mind at that moment.

BS: What can you tell me about Invasian Magazine? What is your involvement with the magazine? Where can I find a copy of it?

Xeme: It’s a mag about Asia graf and culture. Me and two other partners basically does everything from writing articles to shipping out the mags. You can get a copy on BOMBING SCIENCE indeed!! And check out http://www.invasianmagazine.com where for retail locations in other countries.

BS: I like the idea of Invasian Magazine and it’s concept of showcasing Asian talent. Apart from exposure, what do you hope to accomplish with Invasian?

Xeme: We hope to influence more people to write in Asia and develop some cool styles. It’s the biggest continent in the world, so there should be some big things going on in the future, and we want to be the ones to record and share it with the rest of the world. BS: Let’s go back to the genesis of graffiti in Hong Kong, for a second. The art started booming [in Hong Kong] around the same time as the historic handover, where the British gave rule of Hong Kong back to China. Now, with China in the picture, has the government put any noticeable pressure on artists to stop writing graffiti? If so, what are some examples of added pressure? Are you personally affected by the pressure?

Xeme: Writing graffiti hasn’t really been a big deal down here. So i wouldn’t say there’s a big different before and after the handover. In fact, I don’t really see any big changes after the handover, probably because I’m not involved in any political and big business shits.

BS: The use Chinese characters in graffiti is something North Americans rarely see done, here. This might sound like a silly question, being that you are from Hong Kong, but do you consciously use the characters to separate yourself from foreign artists? Or do you use the Chinese characters because they’re a part of your culture? Please explain your answer.

Xeme: I saw a documentary a few years ago that was asking some China writers why they never tried writing in Chinese and they replied that it’s too hard to write and develop. I felt a bit strange after hearing that answer since we wrote Chinese for most of our life and somehow they say it’s not comfortable writing it. As a result, I start writing different Chinese words every time I piece.

BS: In North America, the penalties for graffiti are strict and the sentences are often harsh; graffiti is seen as a serious crime here. How are writers in Hong Kong treated by the judicial system?

Xeme: Usually you can talk your way out if you’re not running from the cops. Worse case if you do get busted, there wouldn’t be any jail times but most likely paying some fines. However, if you’re hitting a train or something serious, then it’s a different story.

BS: WORD ASSOCIATION : I give you a word/phrase and you give me the first word/phrase that pops in your head
* Family : Folks, my girl, KBoys.
* Politics : Chris Rock
* Greatest Fear : Ankle sprain
* Greatest Achievement : Killed 30 chicken wings in a row.
* Greatest Joy : massage
* Competition : could be a positive thing
* Hong Kong : I love HK!
* Your Legacy : Questionable

BS: If I were to visit Hong Kong, where am I most likely to find your best work?

Xeme: All my works sucks, I’ll take you to cover it.
[Note: Xeme is a dope artist, the pictures are proof] BS: Does your family know you are a writer? Or is it secret? And if they know, what do they think of your work??

Xeme: It’s hard to hide when there are so many cans in your home. They never stop me from doing it so i consider them VERY broadminded already. They never understand what I’m doing, and i never wanted to explain it either. It’s a generation gap thing…

THANK YOU SO MUCH FOR YOUR TIME, Xeme!! I hope you continue the great work and I wish you much success in your future endeavours. 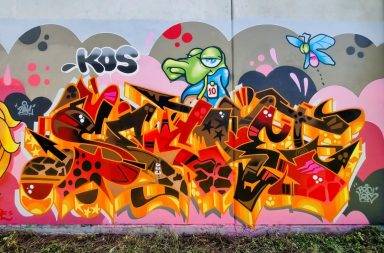