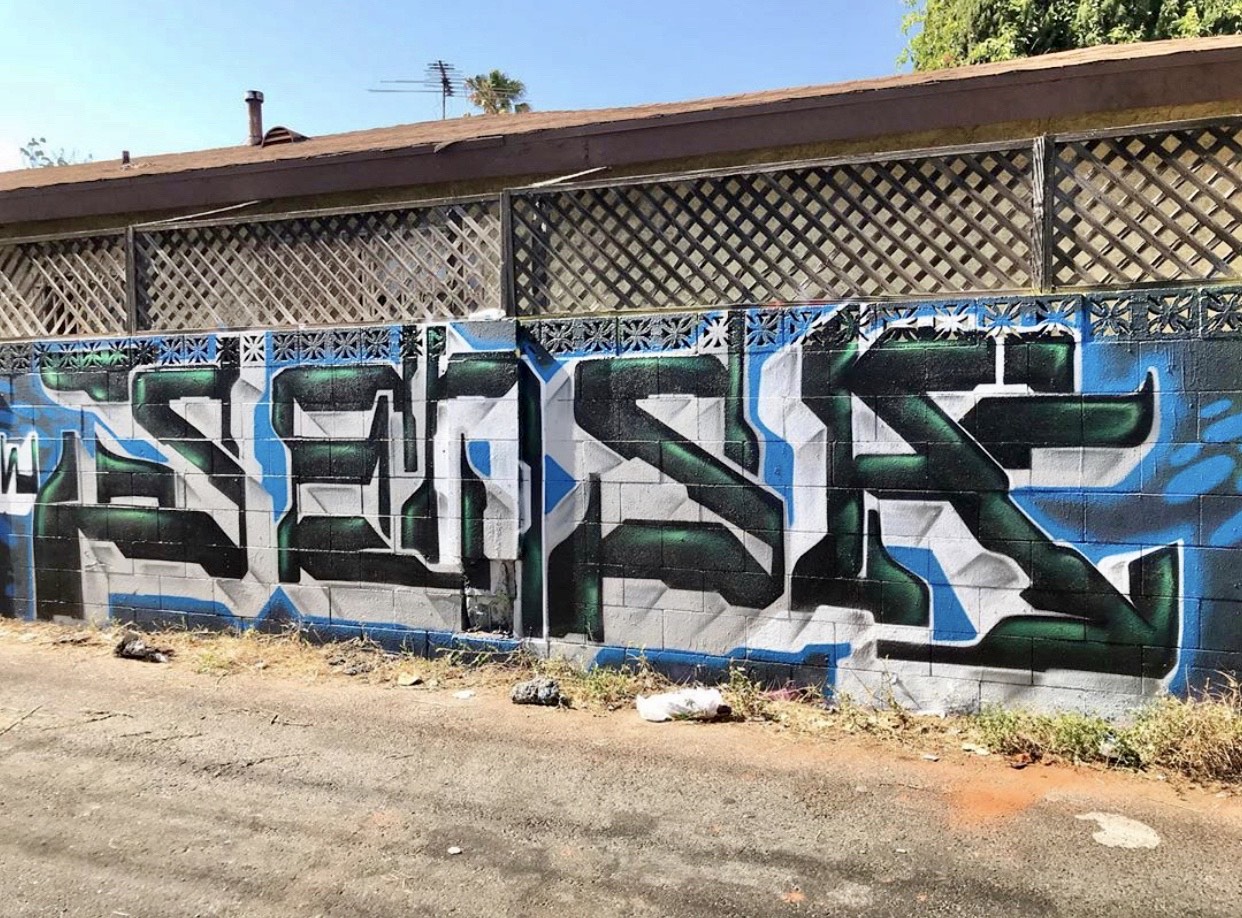 Alright so thanks for taking the time out to do this interview, can you give us a brief introduction to who you are, what your history is in the graffiti game and what crew do you rep? How did you come up with the name Sensa?

I am sensa or sensae there both pronounce the same. I’m a father, husband, sign painter, a Graff writer, and fisherman. I’ve been doing graff for a while now I think I started around 1990 but was only a local writer around my town didn’t really leave my area till about 1992 when my self and friends got into the bus scene.  I was looking for a new name in 1993 and was watching karate kid and I liked how the Kobra Kai’s would use the word sensei n was like that’s cool I’m gonna run with that name but change the spelling to sensa later I added the E at the end

You have a pretty extensive backlog of work posted on your instagram, I get the feeling that you’ve been around for for a minute! I liked the post you made about the fashion of graffiti and how its changed over the years but how else do you think graffiti has changed? Now with the internet everyone learns from each other but sometimes we see styles that look the same, how do you think the graffiti game has evolved in both good and bad ways?

Yeah I have seen graffiti change over the years it’s somewhat funny to see I mean I had to put away the size 40 dickies LOL. I think that the Internet somewhat ruined graffiti but it also made a lot of us step our game up seeing what other people in other countries or states we’re doing you’ve got a lot of these kids out there nowadays who copy styles off the Internet and go straight from the sketchbook to piecing legal walls and don’t practice the fundamentals of the game like the footwork aspect. In our days growing up, we struggled to get a ride and were on the bus or stealing our parent’s cars A lot of these kids now got cars so it makes it a lot easier for them. Graffiti is more acceptable these days and easier to do with all the good paint out there  there’s no excuses for people to still suck I think graffiti in LA is at it’s worse there’s a shit load of hipster throwies everywhere

Your relationship with God seems to be of importance in a lot of the posts you make online, I would assume there is a story behind this? Do you care to share your experience that lead you to where you are now from a spiritual point of view? (If not ignore the question and I will delete it)

Ya I’m a believer in 2015 I caught a case for assault with a deadly weapon and Terrorist threats on a snitch and was looking at a lot of time but I got sober put my trust in God and fought the case and got the minimum sentence of 1 year 3 years of probation and a strike I prayed and asked God to give me the minimum sentence and poof after 6 months on bail fighting the case it happened and I jumped on the deal so with that said I know he was listening  I’ve been sober 5 years and never attended a rehab or aa meetings. I was a drunken mess before I found god

Your style seems to be everywhere but at the same time it’s still cohesive. Some of it even looks inspired by sanskrit or something else I cant put my finger on. Who were the writers and artists that have inspired you over the years and who inspires you today?

I try to keep my style all over the place these days from fonts to just shapes that look like letters.  After getting into sign painting I appreciated fonts a lot more. As for writers who have influenced me I’d have to say we’re the guys from coi, k2s, wca, cbs, Msk, Uti and sh. All those crews pumped out awesome work and most of them still do. As for who inspires me these days I’d have to say my boy Ekoh dudes slept on and is a beast, my brother Aloy  for staying active and always having super clean work they both inspire me to be better and pump out better work.

Living in LA right now, how has covid and the lockdown affected your ability or desire to do graffiti? Do you feel like the extended lockdown is having a disastrous effect on the city or no?

Covid has made it a lot easier here in LA I feel there so many run-ups going down left and right I don’t think covid has made an impact on graffiti here. The pigs don’t wanna even deal with it right now everyone’s staying active and you even have some guys taking advantage of it and their time off from work to paint more

Any crazy graffiti stories you can share? If not, do you have any fishing stories to share? You seem to catch a lot of em!

To many crazy stories Lol  but one time we were on a rooftop off the 10fwy  it was myself Aloy, odds, saze, resq on the roof and zoueh, kosh and cin76 on the bottom we got spotted and had to shake the spot but I was last on the roof n jumped down only to brake my right foot I had to hide behind a big rigs tire for a bit when everything was clear I started to try and walk to the railroad tracks that were nearby only to find Resq and saze Against the cop car with their hands on the hood I just kept trying To limp by and not get noticed as soon as I got to the tracks I took my shoes off which was a dumb move and placed my socks over my hands and proceeded to crawl about four blocks till I got to a payphone and called home for a ride I had to bullshit my father and tell him that some gangbangers started blasting at us while we were partying because if I would’ve told him what really happened he would’ve left my ass there it was about 4:30 in the morning and I remember him telling me what the fuck I have to go to work at six lol He dropped me off at home and wouldn’t even take me to the hospital I sat there in pain drinking tequila and smoking weed till about 7:30 am then my mother and brother were able to pick me up and drop me off at the General Hospital sat there all day just to get a cast on my foot all the homey‘s were in town for the smoke out so we decided to go out bombing all deep like idiots the night before . I ended up going with them to the smoke out in a cast and sitting there all fucking day bored well all those fuckers were out running around having a blast But fuck it I didn’t get arrested

What kind of music do you listen to when you paint? Who is your favorite hip hop artist?

I listen to a little bit of everything from hip hop to classic rock, punk rock  whatever sounds good to me pretty much don’t think I have a favorite artist, to be honest

Do you have a favorite graffiti book or documentary that you consider to be the best? Why?

I like the old-style wars, graffiti Verite 1&2, infamy was dope n the war 1&2 was cool but to say the best I don’t know man, I can’t say

Shout outs to Flooz for keeping me on the straight n narrow, Aloy, Brock77, Zoueh, Duem, Ekoh, zones, the seventh letter crew, stk’s, gw’s, and you guys for being interested in me. 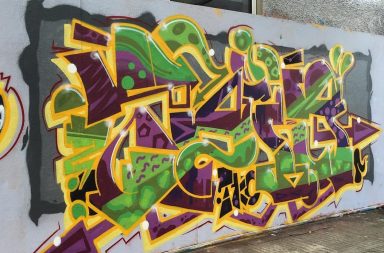 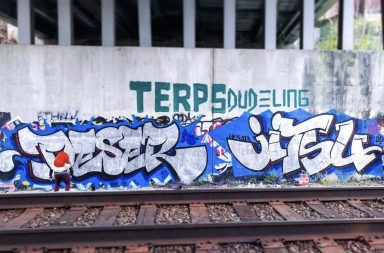 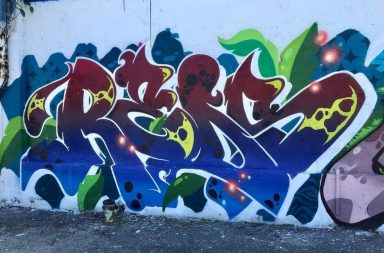