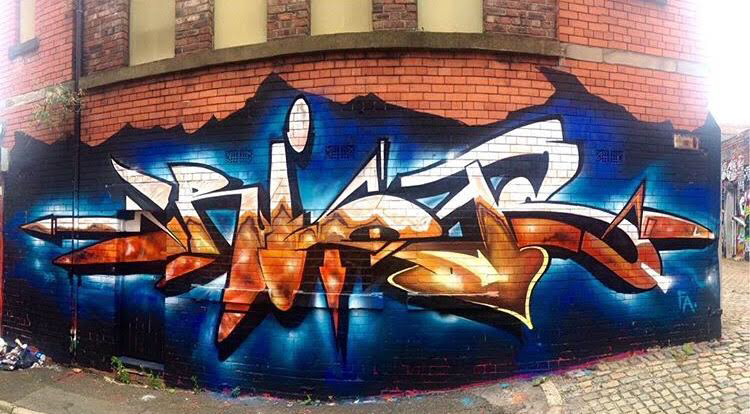 1) Alright so thanks for taking the time out to do this interview, can you give us a brief introduction of how you got to this point? When did you start, what crew do you rep (if any), and what’s the story behind “riot”?

Hey man, no problem at all, it’s really cool of you for getting in touch!
So when I was a kid I would go to my granny’s every Sunday and she lived right beside a leisure center with a hall of fame at the back of it and every weekend DRIS  would be there painting. Every wall had full-colour incredible burning productions, it was amazing to see it happening and how it was done, I sat on the curb and watching in awe.
I grew up in Belfast, Northern Ireland and started dabbling with writing graffiti around late 2004 early 2005. I started out with my school mate PASTONE, he started slightly before me with a friend in his street who got him Into writing and from there it just snowballed. We didn’t have a clue, I remember the first tag I ever did was with a felt tip marker and I was wondering why it wouldn’t write on a wet lamppost, hahaha. We started at the same level and at that time we didn’t have anyone to show us the ropes so it took us a while to find the good stuff, like the white Pentel stub markers, shoe polish markers, paint pens, and the chisel tips etc. For the first few years, we mainly tagged and bombed going through different words. My first word was Saro, I remember going down an ally with a tipex pen and doing an outline and then telling my friends in school the next day I did my first piece haha, good times! After that I wrote Artez, I wrote that for a while but then changed because it was too close to Artz, a writer from Dublin who was a real style master and painting incredible walls. I then changed to Onz, I wrote that for a year or so and then changed to Riot, a lot of people asked me is it anything to do with the riots in Belfast and that but it’s not, I liked the word and having four letters was a nice balance and ending on a T was great for stretching out extensions, I love painting a long piece!
The first official crew was VN, Vandal Nation, they were the young days with PastOne, Trash, Rend and Der. As a crew we started to paint pieces and become more interested in style and developing letters, they were such good days, every weekend we would wake up real early and get to the wall for 7am so that when we were finished we still had the rest of the day to go skate!
A few years of that went by and naturally, people became less and less interested and only a few of us continued on. I started to hook up with other crews and meeting other writers and learning a lot. I started painting with the TCP crew (The Cats Pyjamas), we painted a lot of productions together and eventually, I started putting up TCP! Again after a few years of painting with TCP we all had a few years being active and then not so active but we always painted when we could, I guess around then there was a lot of doing stupid shit and partying/growing up, etc.. we got our heads screwed on and got asked to join FAK! This was the biggest crew in Belfast with the guys I sat watching on the curb as a kid all those years ago, the dons DRIS & DENO.

2) alright so first off I just watched your YouTube clip “fak Belfast Graffiti Fuck Mainstream” and I gotta tell you I love it, man, it was what caught my attention as soon as I looked at your page. I liked the overall direction of the video but also the audio clips you put in of George Carlin and other free thinkers who all have that same fuck mainstream mentality. Can you explain the process behind creating this video? What was it about the specific audio clips you included that you felt resonated with graffiti that made you want to include them?

Ah that video was actually made by our crew friend, he was making videos of our productions but I don’t think he’s making videos at the moment, unfortunately, it’s such a sick video though. I learned a lot from him and I really want to get into making videos myself, I made some videos during university and loved the editing process! I think Instagram has taken so much of the experience out of actually painting and what it’s like to be at the wall and making videos can really capture that.

I loved style wars as a kid obviously, it was the first graffiti documentary I watched. I was obsessed with Dirty Handz 1,2 & 3, especially 3 I loved the narration and the storytelling. The first book I looked at in school was Graffiti World, I remember looking at Jace, 3A crew, BLEF, Binho, Futura and many, many more, that is such a good book thinking about it, so many great artists in it, it’s mad to think I’ve met one or two writers from it. I’ve bought Augustine Kofies book, that’s super inspiring along with Does from Love Letters, 20 Years book. I’ve also got Druid’s style volumes, they’re full of documentation of his sketching process, soo good, volume 3 is out now I’d definitely recommend it!

4) I see you have some posts labeled as drawing from the Dumfries house, which I’m assuming is a school correct? So did you have formal training as an artist or are you completely self-taught? What did you learn that carries over into graffiti?

The Dumfries house studies are from a residency I won through university, it’s a bunch of little art studios up in an area called Cumknock in Scotland. It was a bit surreal as it’s a royal estate so everything is ridiculously grand and well looked after, it was quite a contrast coming from the city up to there for 4 weeks!

I studied ‘fine art’ at Liverpool John Moore’s University but to be honest you don’t really get taught how to paint or taught basic art knowledge. You’re given a studio and told to go to lectures about art history and the odd artist’s talk but the rest is up to you. Regarding technique and painting knowledge I’m self-taught through painting graffiti, it taught me composition, color theory, balance, to keep pushing through a piece even when it’s going shit and to not take life too seriously. When I think about graffiti I visualize contrast, I think about how is this outline color going to pop against this fill color and how will it all sit with the background and that’s what I’m trying to communicate with the canvas paintings. I like mixing natural elements and man-made elements together, like clouds mixed with a solid perfect cube or whatever, it’s never ended, I love making up different designs and compositions on photoshop. I’m now thinking about getting more realist elements into my graffiti and creating a connection between the fine art and graffiti, I guess a lot of people are going down that path.

5) What kind of music do you listen to when you paint? Who is your favorite hip hop artist and why?
When I paint I don’t normally listen to any music, even though graffiti is the most social anti-social sport there is I like to just chat and chill and a lot of the time someone will have a wee speaker and we play beats through that. At the wall we will do a lot of critiques, it’s great, sometimes I get a right bollocking if something’s done shit haha, it’s good though you won’t do it again and you learn so much. Regarding music, I listen to all sorts, from Panterra, to lofi chilled beats to whatever really. My favorite hip hop track has got to be Day at the races by Jurassic 5, I also love Travelling through the speed of thought – hip hop house mix by Ultramagnetic MCs.

6) do you have any aspirations to turn this hobby into a full-time income or do you only do it for the love of the streets and the adventure of it? You seem to enjoy doing other things like traditional painting so would you ever consider putting work in a gallery?

I like to paint graffiti with friends, that for me is just a hobby that I love, it’s done a lot for me and I’ve learned a lot and met so so many good people through it so regarding money I think it would take the spark of that away. Pushing my artwork further with my background in graffiti and painting big walls definitely interests me as well as having worked in galleries is something to dream about. I’m painting a lot more fine artwork now and really getting into it again so I’ll keep at it. I’ve just moved to a new city (Leeds) so I’m finding my feet here and getting going/meeting new people in the art circles etc.

7) do you travel a lot? If so what are your favorite places to visit and hit? Any crazy travel stories you can share?
Yeah, I absolutely love to travel when I can, my favorite place has got to be Poland, I’ve been lucky enough to go there a handful of times and see the country, the people are so sound and the architecture is incredible. I traveled to Sydney, Australia recently to see family and ended up bumping into Phibs in the street, that was crazy, I need to go back it’s such a classy place! Graffiti and traveling is the best thing, there’s nothing like chatting to people online, traveling to meet them and then having that local experience in another country, it’s amazing!

8) when you were coming up who inspired you and taught you the ropes and who inspires you now? Who are the artists that are inspiring you now?

DRIS & CIAR were the people who were really pushing the graffiti scene in Northern Ireland when I was a kid they were and still are a massive inspiration.
There are so many artists that I think are incredible but STARE, WEB, NAE, DARE, RUSL, ARYZ, DRUID, TONES, DANLEO, JAMES EARLY, ELPH, RATE, DRIK, SBB crew are all incredible but there are too many to mention. It blows my mind the amount of artists there are out there really pushing the boundaries, a really good thing about Instagram!

Check me out on my Instagram page!
I’d like to give a huge shoutout to BETA, DEAD & PESE and the rest of the Liverpool heads. MEDS & PEAL for showing me the ropes in Leeds and to all the crew back home in Belfast, they know who they are!
Thanks again for getting in contact it’s been real nice thinking back to some old times.
Cheers,Riot