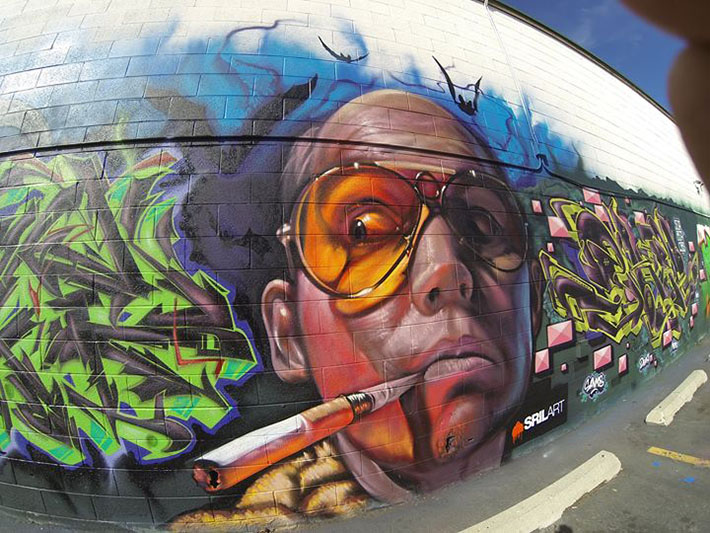 BSCI: Introduce yourself. Who is Sril Art and where are you from?

SRIL: I write SRIL (Surreal) and I’m from Salt Lake City, UT. Artistically, I guess you could say I’ve carved out a niche as a character guy, although I respect and appreciate letters equally. Everything I’ve ever achieved I had to fight for and my ambition far outweighs my skill.
As a person, I’m a husband and father who prides himself on being loyal, humble, respectful and eager to learn from anyone who is willing to teach or anyone who has been down the path before me. 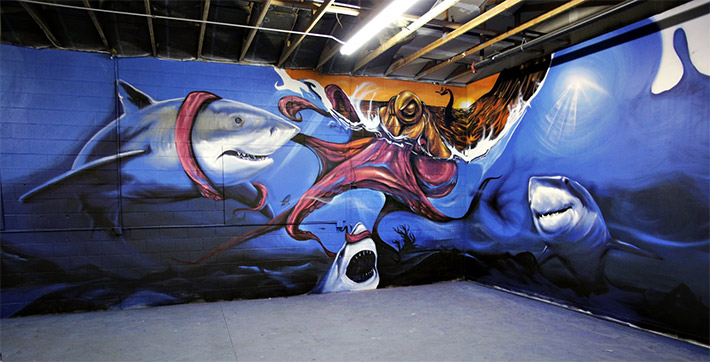 BSCI: You just said something that really stuck out – your comment about having ambition that far outweighs your skill. Before we proceed with your story, I want to know how important is it for a person it to be driven; constantly pushing yourself forward rather than resting on their laurels? There are a lot of writers who live off their past work’s reputation rather than improving, why do you place ambition above your skill?
SRIL: I think for some people, it’s less about resting on laurels and more about not wanting to fail. A lot of guys get stuck in a position where failure isn’t really an option so they’ll keep repeating what they have had success with; I can’t fault them for that at all.  Others will slowly create advancements that your average viewer won’t notice, until a handful of those advancements become something completely unique. For me, being willing to fail (Which I often do – Thanks Miami! ) allows me to keep progressing. I’m fortunate that what I paint, and where I am in my “career” to have that freedom.

BSCI: Back to you … what’s the story behind your name and is there any significant meaning to the alias?
SRIL: Sometime, in 2012, when I really started to focus on the portraits and characters I was having a discussion with KUHR and CHEW (two people whom I owe a lot to, btw) I decided it was time for a fresh name, something that was a better fit with what I was doing or trying to do.
The name is reflective of what I paint; it pays tribute to one of my favorite artists Salvador Dali and may also be a subtle little jab at anyone who has ever said I’m not “real”. 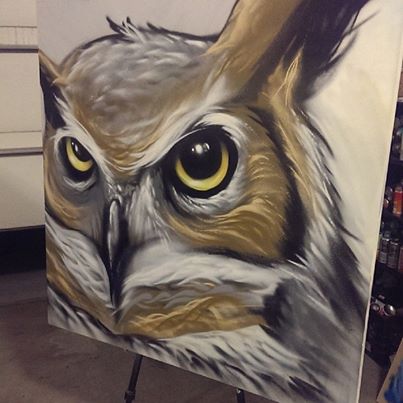 BSCI: What does graffiti, as an art form and culture, mean to you? What attracted you to this medium?

SRIL: Graffiti as an art form has got to be one of the most difficult forms there is to be a part of. Although the public perception is improving, it’s widely unaccepted by anyone not involved with it. You have to deal with the elements, risking your life or freedom (obviously depending on your activity level), dealing with egos, politics and rumors all while trying to find the time to improve your craft and actually apply it somehow. But with all that is has working against it, if you’re determined enough to find some success, It is in my opinion the most rewarding art form there is.
As for what attracted me: I’ve always been into drawing, but as a young kid me and a couple of friends stumbled on a couple characters and a piece done illegally on a wall we’d always walk past. I remember stopping and looking at it in awe. Trying to figure out how it was done, why it was done… and where I could find more. I spent more time buying magazines and trying to pick the brains of local hero’s than actually painting myself.

Someone a lot wiser than me once said, "You don’t get to choose the medium, the medium chooses you."

BSCI: And, in what way has graffiti chosen you?

SRIL: That’s something I’m still learning every day, I guess. Far more than just using a spray can … it’s provided many friendships, life lessons, and something I can truly be passionate about. When the ride is over, hopefully I will have given back something in return.
BSCI: Nice answer – very insightful. Now, I’m curious to know you thoughts on style- your style, in particular. How would you describe your technique and who has influenced you the most?
SRIL: Stylized realism is the best way to describe it. Some of my early influences were guys like KATCH, SCRIBE and ZODAK. But I’ve had mentors like CHEW and KUHR who have helped me quite a bit. I tend to look outside of graffiti, as well. I try to learn more any chance I get, and build my skillset. 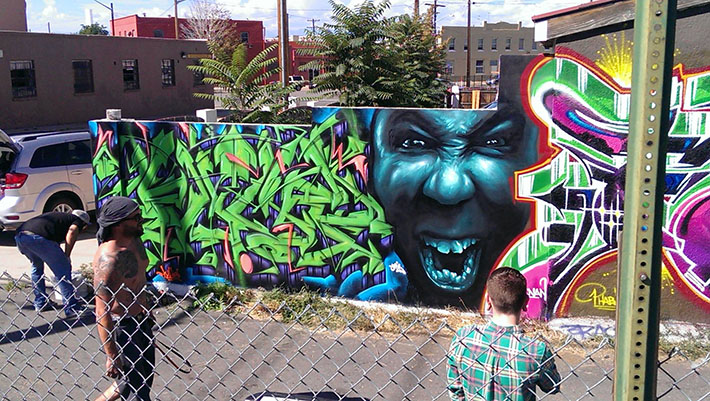 BSCI: Your home state of Utah doesn’t get a lot of exposure; in terms of its graff and contributions to the culture. I’d like to take a few moments to ask, what is Utah’s graff scene like? How active are the writers (and crews) in your area? How do all of these writers coexist?
SRIL: Historically, there were a lot of really talented / motivated people here. A small handful of people can be credited for Utah having a scene at all. The ones, who pioneered spots, had unique styles and really made a giant impact.
Presently, I feel like there is an imaginary hierarchy which most people think if they attach themselves to it, somewhere up the chain, then they’ve made it (as a writer). Fuck having style, skill or any originality. A lot of people just want to piggyback off established names and that is weak.  There are a few younger guys that are BURNING most of the so called “elite”. But they get treated like they are unworthy of being respected. 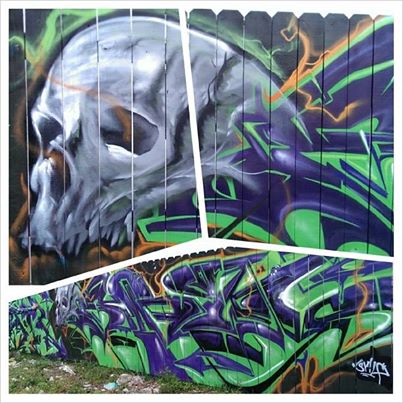 BSCI: I’m sure beefs do pop-up every now and then. Have you had any rivalries or beefs?

SRIL: I’ve had an issue in the past that came up due to my dislike of the hierarchy mentioned before, and some beef because of an old crew mate. It put a couple people in a position where they want to prove loyalty, but for the most part people just don’t want to get involved.
BSCI: Of those issues, with other writers, is there any particular issue(s) you’d like discuss and/or settle, right now?
SRIL: Back in 2007 I went to jail with the former crew mate mentioned above. I think out of pride the guy wanted to blame someone else for getting caught, so he made up some elaborate story about how I supposedly snitched on him.

Everyone who knows the real story and who has read the police report knows that his story is bullshit. I’ve always remained very non-vocal about it, and I’ll continue to let my character and work speak for itself.
No matter what you are doing if you have any success there will be people who try to take something away from you. “His pieces are dope but he doesn’t bomb” “His characters are great but he’s not a graff artist” etc.
Surround yourself with people who can treat your success as motivation rather than envy, and as long as you can do the same, everyone will prosper. 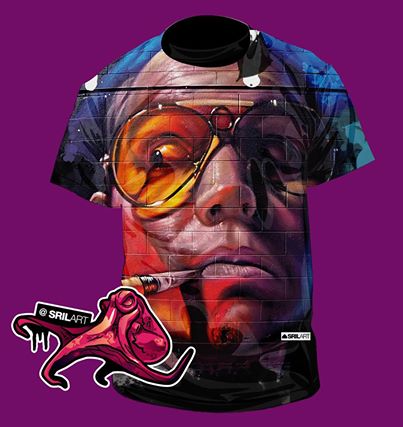 BSCI: Let’s transition back to your creative process as an artist who is branching out beyond graffito itself. Recently, you’ve been selling some of your prints; specifically, t-shirts. I’m curious to know more about the clothing line you’re producing. What can you tell me about venture?
SRIL: I wouldn’t say it’s a clothing line just yet, I’ve produced a limited run of some of my favorite works from this last year, I’m grateful to have sold out all shirts in just 2 weeks. It may turn into something more, it may not. It’s still in the early stages.
BSCI:You’ve caught the attention of many people thanks in part to your on-point Tech N9ne mural. Few people, in my area, seem to be aware of his hustle, but Tech embodies much of the ethos that is required for anybody -be it musician, graffiti writer, businessperson, ect. – to be successful. You gave him a true salute with that painting. Without going too in-depth, I just wanted to know why you chose Tech N9ne as a subject for your painting? What does his music mean to you?
SRIL: Tech has always been one if my favorite rappers, there’s a lot about his music and his career that I can personally relate to. He’s the most successful independent rapper of all time, and like you said, he possesses a ton of qualities which I try to have myself. He has that do-or-die mentality that is so important in the realm of successful [graffiti] writers  — "We ain’t knockin anymore, we’re breakin in." 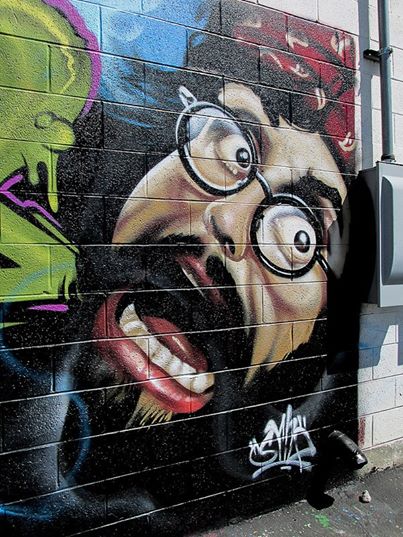 BSCI: Do you have any final words before we go? Is there anybody you’d like to shout outs?
SRIL: I’d like to shout-out: KUHR, CHEW, everybody at MTN COLORS. I’d like to thank anyone else who’s ever supported me, taught me or motivated me to get better (those silly ass haters, included).

At the end of the day, I want to remind people, we’re not that special – nobody is better than anyone else. So be humble, be respectful, and don’t let your ego ruin your own talent. 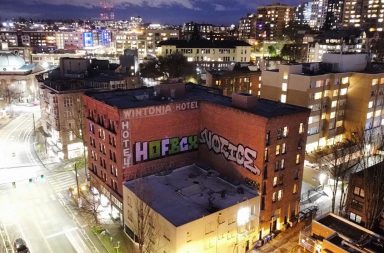 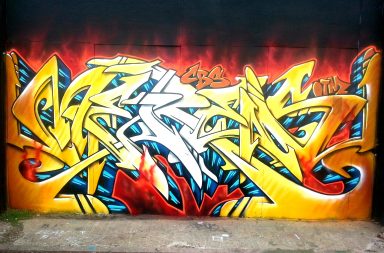 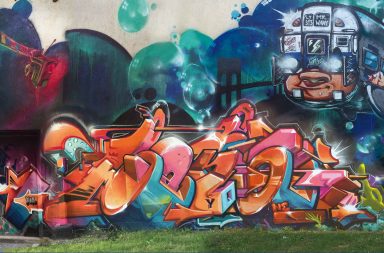